Answering my own question, here’s the distribution of all 12,000 constants from a dozen models, harvested from my hard drive. About half are from Ventana, and there are a few classics, like World3. All are policy models – no physics, biology, etc. 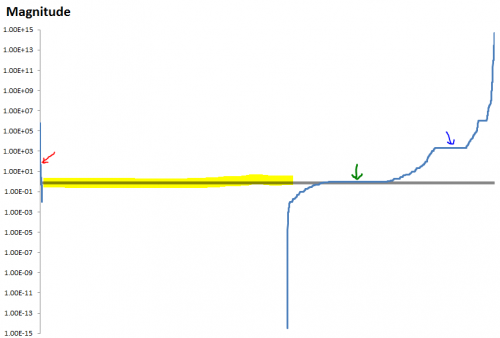 The vertical scale is magnitude, ABS(x). Values are sorted on the horizontal axis, so that negative values appear on the left. Incredibly, there were only about 60 negative values in the set. Clearly, unlike linear models where signs fall where they may, there’s a strong user preference for parameters with a positive sense.

Next comes a big block of 0s, which don’t show on the log scale. Most of the 0s are not really interesting parameters; they’re things like switches in subscript mapping, though doubtless some are real.

At the right are the positive values, ranging from about 10^-15 to 10^+15. The extremes are units converters and physical parameters (area of the earth). There are a couple of flat spots in the distribution – 1s (green arrow), probably corresponding with the 0s, though some are surely “interesting”, and years (i.e. things with a value of about 2000, blue arrow).

If you look at just the positive parameters, here’s the density histogram, in log10 magnitude bins: 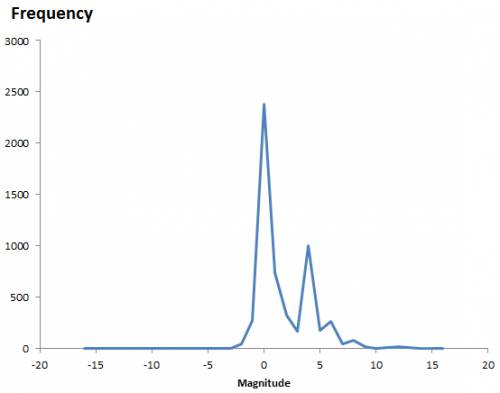 Again, the two big peaks are the 1s and the 2000s. The 0s would be off the scale by a factor of 2. There’s clearly some asymmetry – more numbers greater than 1 (magnitude 0) than less. 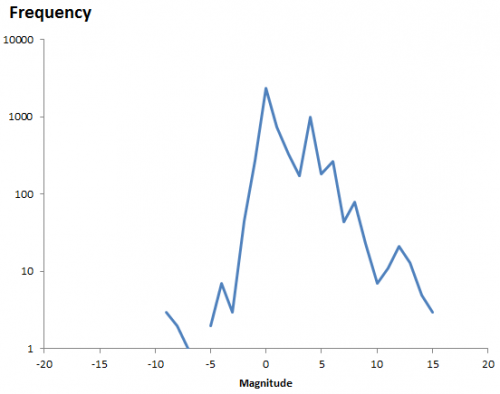 One thing that seems clear here is that log-uniform (which would be a flat line on the last two graphs) is a bad guess.

Vensim‘s answer to exploring ill-behaved problem spaces is either to do hill-climbing with random restarts, or MCMC and simulated annealing. Either way, you need to start with some initial distribution of points to search.

It’s helpful if that distribution is somehow efficient at exploring the interesting parts of the space. I think this is closely related to the problem of selecting uninformative priors in Bayesian statistics. There’s lots of research about appropriate uninformative priors for various kinds of parameters. For example,

However, when a user specifies a parameter in Vensim, we don’t even know what it represents. So what’s the appropriate prior for a parameter that might be positive or negative, a probability, a time constant, a scale factor, an initial condition for a physical stock, etc.?

On the other hand, we aren’t quite as ignorant as the pure maximum entropy derivation usually assumes. For example,

At some point, the assumptions become too heroic, and we need to rely on users for some help. But it would still be really interesting to see the distribution of all parameters in real models. (See next …)