I’ve been too busy to post much lately, because I’ve been busy with projects in city energy planning, web interfaces, and chronic wasting disease (CWD) in deer, plus a lot of Vensim and Ventity testing.

I’m hoping to write a little more about CWD, because it’s very interesting (and very nasty). We’ve been very successful at blending Structured Decision Making (SDM) with SD modeling in Wisconsin’s 10-yr plan review. We’ve been able to use models live in a rather diverse stakeholder group, including non-modelers. The model has worked well as a shared thinking tool, triggering some really good discussions, without getting mired in black-box problems.

The video below is from an “under the hood” session that looked into the details of the model for an interested subset of participants, so it’s probably nerdier than other more policy-oriented discussions, but also of greater interest to modelers I hope.

I’ll have more to say about SD in CWD policy and the marriage of SD and SDM soon, I hope.

I think there’s a lot in Marsalis’ commentary that will make sense to systems thinkers. Listen to the person next to you. Stay optimistic, but mindful of the problem. Confronted by crisis, transform your paradigm. And of course it’s a beautiful tune.

On Saturday I gave a quick introduction to modeling the coronavirus epidemic in a Crusonia livestream, followed by Q&A. We had some really smart people on the call, with lots of interesting ideas to follow up on. I talk a bit about economic tradeoffs, using a speculative extension of my earlier model. One thing that was clearer to me after the discussion than before is just how hamstrung we’ve been by the lack of testing. I think it would not be much of stretch to say that this failure is costing us a billion dollars a day, due to inability to isolate the infected and lack of information for decision making.

The second panelist – Eugene Scarberry – was really interesting, both for his extensive experience in the trenches getting things approved at the FDA, and some good background on ventilators and alternatives, and how to get more of them.

BBC UK writes, Coronavirus: Three reasons why the UK might not look like Italy. They point to three observations about the epidemic so far:

I think these speculations are misguided, and give a potentially-disastrous impression that the UK might somehow dodge a bullet without really trying. That’s only slightly mitigated by the warning at the end,

Don’t relax quite yet

Even though our epidemic may not follow Italy’s exactly, that doesn’t mean the UK will escape serious changes to its way of life.

Epidemiologist Adam Kucharski warns against simple comparisons of case numbers and that “without efforts to control the virus we could still see a situation evolve like that in Italy”, even if not necessarily in the next four weeks.

… which should be in red 72-point text right at the top.

Will the epidemic play out differently in the UK? Surely. But it really look qualitatively different? I doubt it, unless the reaction is different.

The fundamental problem is that the structure of a system determines its behavior. A slinky will bounce if you jiggle it, but more fundamentally it bounces because it’s a spring. You can jiggle a brick all you want, but you won’t get much bouncing.

The system of a virus spreading through a population is the same. The structure of the system says that, as long as the virus can infect people faster than they recover, it grows exponentially. It’s inevitable; it’s what a virus does. The only way to change that is to change the structure of the system by slowing the reproduction. That happens when there’s no one left to infect, or when we artificially reduce the infection rate though social distancing, sterilization and quarantine.

A change to the initial timing or distribution of the epidemic doesn’t change the structure at all. The slinky is still a slinky, and the epidemic will still unfold exponentially. Our job, therefore, is to make ourselves into bricks. 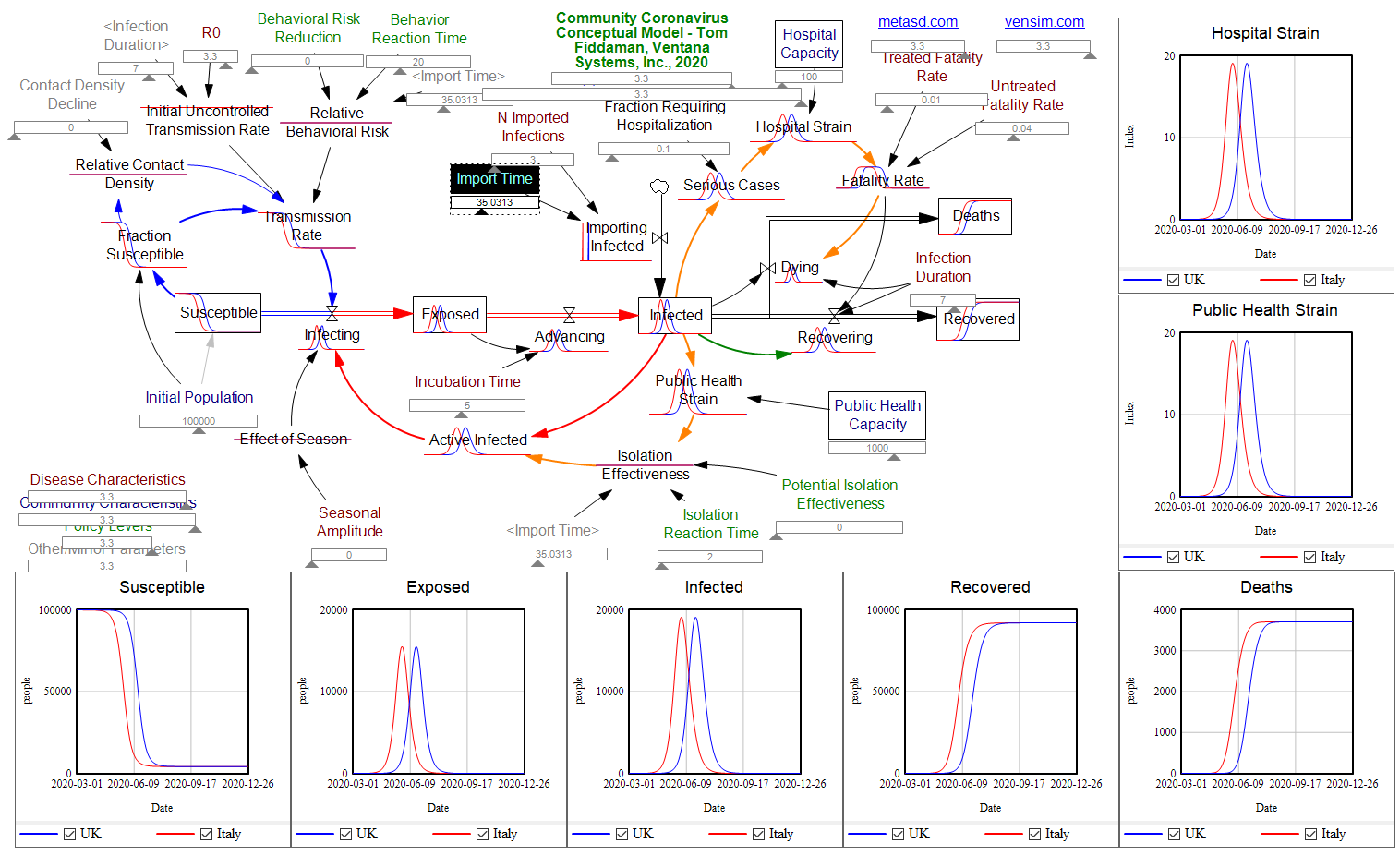 The third point, that fatality rates are lower, may also be a consequence of the UK starting from a different state today. In Italy, infections have grown high enough to overwhelm the health care system, which increases the fatality rate. The UK may not be there yet. However, a few doublings of the number of infected will quickly close the gap. This may also be an artifact of incomplete testing and lags in reporting.

ECDC and WHO debate weighty policy questions of the day … containment or mitigation? 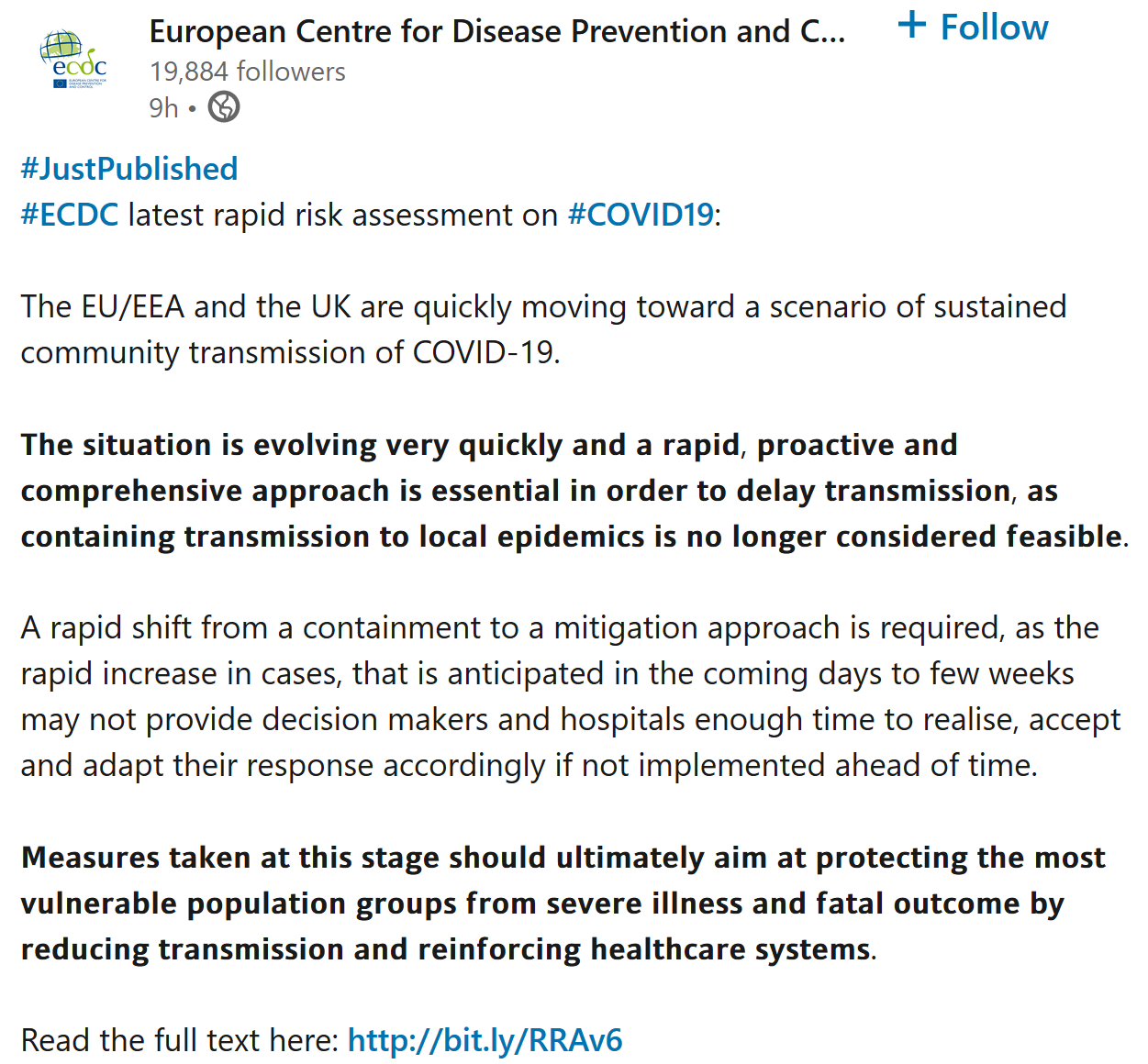 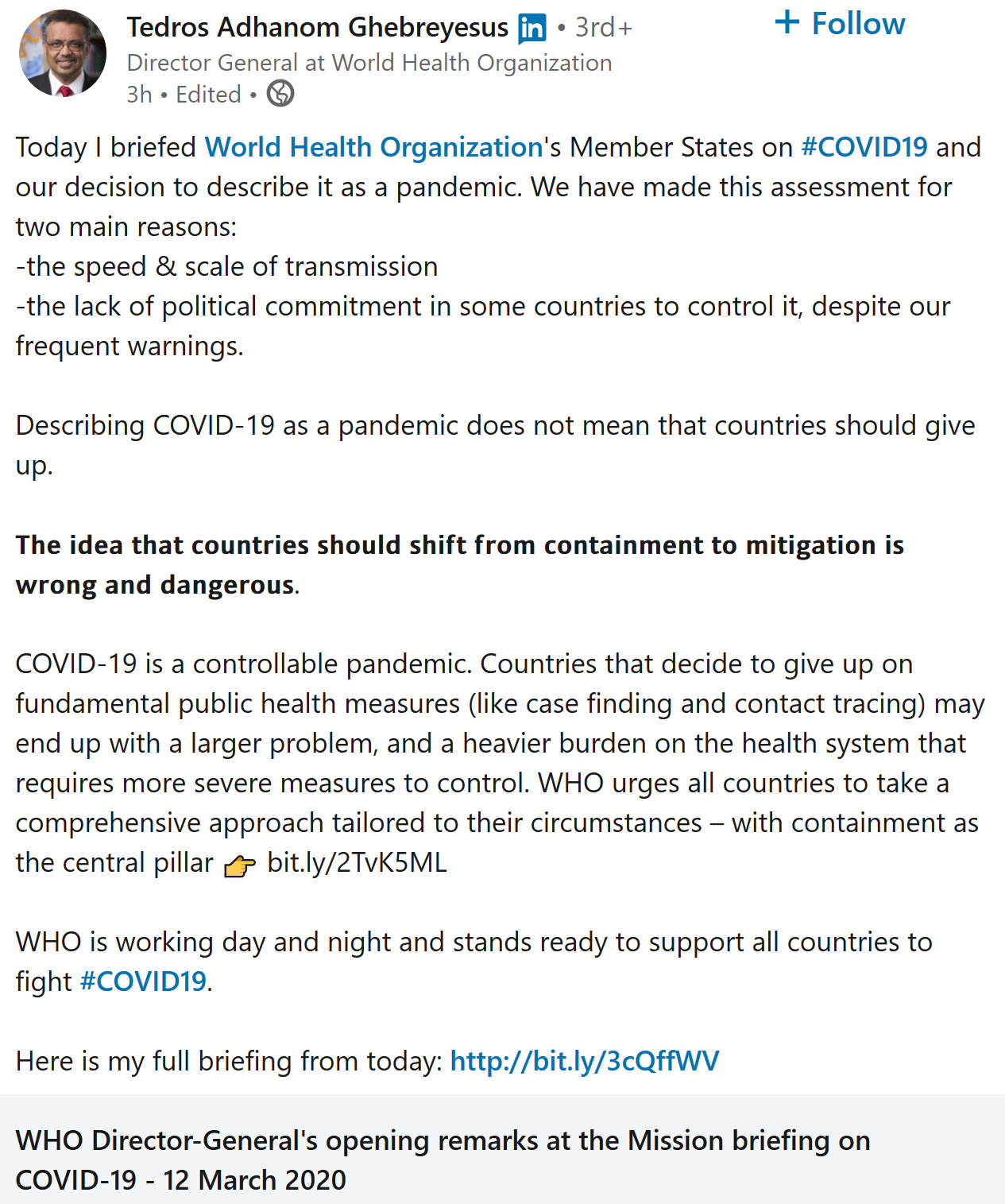 CDC, not so much.

FWIW I think the ECDC/WHO disagreement is less than it seems. ECDC is really saying that behavior change has to do the heavy lifting from here out, not that containment should be abandoned altogether.

I ran across this twitter thread this morning, describing how a focus on border security and containment of existing cases has failed to prevent the takeoff of coronavirus. 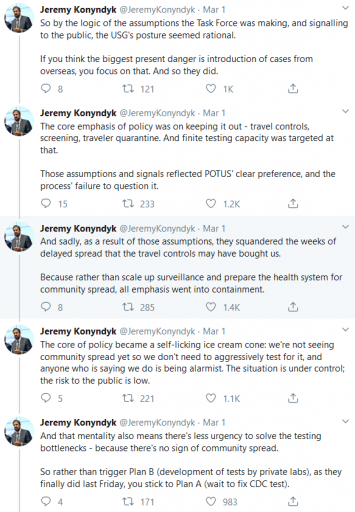 Here’s the data on US confirmed cases that goes with it:

It’s easy to see how this behavior could lure managers into a self-confirming attributions trap. After a surge of imports, they close the borders. Cases flatten. Problem solved. Why go looking for trouble?

The problem is that containment alone doesn’t work, because the structure of the system defeats it. You can’t intercept every infected person, because some are exposed but not yet symptomatic, or have mild cases. As soon as a few of these people slip into the wild, the positive loops that drive infection operate as they always have. Once the virus is in the wild, it’s essential to change behavior enough to lower its reproduction below replacement.

A nonserious guide to model selection: 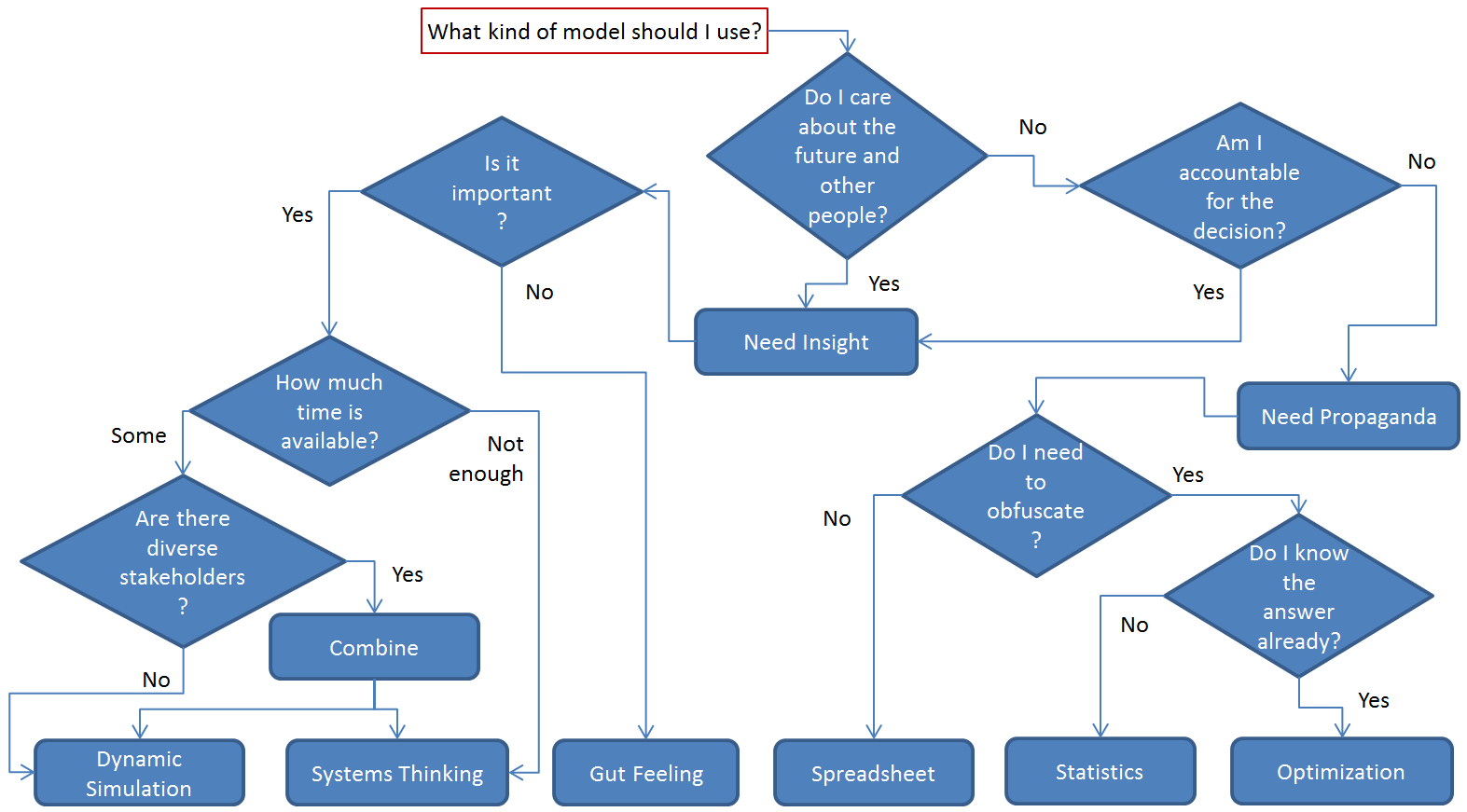 Fibonacci Rabbits are inexplicably popular among all my posts and models. Here’s a cool video on generalization of the Fibonacci numbers to more dimensions:

In my last post, stress takes center stage as both a driver and an outcome of the cortisol-cytokine-serotonin system. But stress can arise endogenously in another way as well, from the interplay of personal goals and work performance. Jack Homer’s burnout model is a system dynamics classic that everyone should explore:

Worker burnout: A dynamic model with implications for prevention and control

This paper explores the dynamics of worker burnout, a process in which a hard‐working individual becomes increasingly exhausted, frustrated, and unproductive. The author’s own two‐year experience with repeated cycles of burnout is qualitatively reproduced by a small system dynamics model that portrays the underlying psychology of workaholism. Model tests demonstrate that the limit cycle seen in the base run can be stabilized through techniques that diminish work‐related stress or enhance relaxation. These stabilizing techniques also serve to raise overall productivity, since they support a higher level of energy and more working hours on the average. One important policy lever is the maximum workweek or work limit; an optimal work limit at which overall productivity is at its peak is shown to exist within a region of stability where burnout is avoided. The paper concludes with a strategy for preventing burnout, which emphasizes the individual’s responsibility for understanding the self‐inflicted nature of this problem and pursuing an effective course of stability.

You can find a copy of the model in the help system that comes with Vensim. 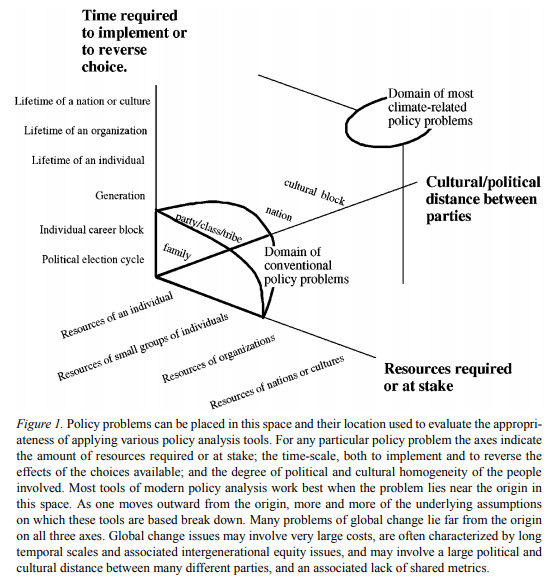