A cool video tracing the evolution of feedback control from Maxwell’s seminal paper on steam engine governors to quadcopters that can perform amazing feats.

Climate Change Policy: What Do the Models Tell Us?

Very little. A plethora of integrated assessment models (IAMs) have been constructed and used to estimate the social cost of carbon (SCC) and evaluate alternative abatement policies. These models have crucial flaws that make them close to useless as tools for policy analysis: certain inputs (e.g. the discount rate) are arbitrary, but have huge effects on the SCC estimates the models produce; the models’ descriptions of the impact of climate change are completely ad hoc, with no theoretical or empirical foundation; and the models can tell us nothing about the most important driver of the SCC, the possibility of a catastrophic climate outcome. IAM-based analyses of climate policy create a perception of knowledge and precision, but that perception is illusory and misleading.

Freepers seem to think that this means the whole SCC enterprise is GIGO. But this is not a case where uncertainty is your friend. Bear in mind that the deficiencies Pindyck discusses, discounting welfare and ignoring extreme outcomes, create a one-sided bias toward a SCC that is too low. Zero (the de facto internalized SCC in most places) is one number that’s virtually certain to be wrong.

Participants in my Vensim mini-course at the 2013 System Dynamics Conference outperformed their colleagues from 2012 on the Capen Quiz (mean of 5 right vs. 4 last year). 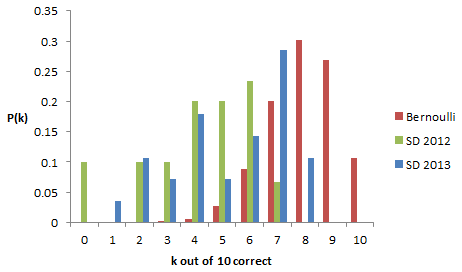 5 right is well above the typical performance of the public, but sadly this means that few among us are destined to be CEOs, who are often wildly overconfident (console yourself – abject failure on the quiz can make you a titan of industry).

Take the quiz and report back!

From the WPI online graduate program and courses in system dynamics: