Der Spiegel has obtained audio of the heads of state negotiating in the final hours of COP15. Its fascinating stuff. The headline reads, How China and India Sabotaged the UN Climate Summit. This point was actually raised back in December by Mark Lynas at the Guardian (there’s a nice discussion and event timeline at Inside-Out China). On the surface the video supports the view that China and India were the material obstacle to agreement on a -50% by 2050 target. However, I think it’s still hard to make attributions about motive. We don’t know, for example, whether China is opposed because it anticipates raising emissions to levels that would make 50% cuts physically impossible, or because it sees the discussion of cuts as fundamentally linked to the unaddressed question of responsibility, as hinted by He Yafei near the end of the video. Was the absence of Wen Jiabao obstruction or a defensive tactic?  We have even less information about India, merely that it objected to “prejudging options,” whatever that means.

What the headline omits is the observation in the final pages of the article, that the de facto US position may not have been so different from China’s:

Part 3: Obama Stabs the Europeans in the Back

But then Obama stabbed the Europeans in the back, saying that it would be best to shelve the concrete reduction targets for the time being. “We will try to give some opportunities for its resolution outside of this multilateral setting … And I am saying that, confident that, I think China still is as desirous of an agreement, as we are.”

‘Other Business to Attend To’

At the end of his little speech, which lasted 3 minutes and 42 seconds, Obama even downplayed the importance of the climate conference, saying “Nicolas, we are not staying until tomorrow. I’m just letting you know. Because all of us obviously have extraordinarily important other business to attend to.”

Some in the room felt queasy. Exactly which side was Obama on? He couldn’t score any domestic political points with the climate issue. The general consensus was that he was unwilling to make any legally binding commitments, because they would be used against him in the US Congress. Was he merely interested in leaving Copenhagen looking like an assertive statesman?

It was now clear that Obama and the Chinese were in fact in the same boat, and that the Europeans were about to drown.

This article and video almost makes up for Spiegel’s terrible coverage of the climate email debacle.

A few random insights that I scribbled down during the process:

I’ve been looking over the final COP15 decision (here, for now). So far it all looks nonbinding. I was curious how some of the players are reacting.

“Today’s agreement leaves the U.S. in control of its own destiny. … As President Obama said today, strong action on climate change is in America’s national interest.” — EDF’s Fred Krupp, Dec. 18, 2009

“The world’s nations have come together and concluded a historic–if incomplete–agreement to begin tackling global warming.  Tonight’s announcement is but a first step and much work remains to be done in the days and months ahead in order to seal a final international climate deal that is fair, binding, and ambitious.  It is imperative that negotiations resume as soon as possible.

“The agreement reached here has all the ingredients necessary to construct a final treaty–a mitigation target of 2 degrees Celsius, nationally appropriate action plans, a mechanism for international climate finance, and transparency with regard to national commitments.  President Obama has made much progress in past 11 months and it now appears that the U.S.–and the world–is ready to do the hard work necessary to finish what was started here in Copenhagen.

Copenhagen a cop-out
Two years have passed since world leaders promised all of us a deal to stop climate change. After two weeks of UN negotiations, politicians breezed in, had dinner with the Queen, a three hour lunch, took some photos, and then delivered what could only be described as the 24-hour Head of State tourist brochure of Copenhagen instead of a climate treaty.

League of Conservation Voters (via email)

I’m in Copenhagen and President Obama has just wrapped up a press conference here announcing that a meaningful climate deal has been reached. While there is still much work to be done, the deal reached is a breakthrough for international climate cooperation and provides a path forward towards a binding global treaty in 2010.

Significantly, the United States and China will – for the first time – both be at the table, working to tackle the historic challenge of global climate change. Additionally, the deal allows for more transparency, as developed and developing countries have now agreed to list their national actions and commitments regarding greenhouse gas reductions.

“We agree with President Obama on the importance of addressing global climate change. However, Congress’s leading proposals could destroy millions of jobs, drive up fuel prices, and, by shifting much of our refining capacity abroad (along with refinery greenhouse gas emissions), substantially increase our reliance on foreign supplies of gasoline, diesel and other petroleum fuels. Worse, the president’s own EPA is poised to issue an expansive regimen of climate regulations that could cripple business growth and job creation, dimming employment hopes for 15 million now out-of-work Americans.

“Public support for government climate change proposals has waned. It’s time for all stakeholders to come together to craft a fair, efficient, market-based climate change strategy that minimizes the burden on consumers and jobs.”

Can’t find a final reaction yet: USCAP, WWF, ECF, and many others. Seems like the press releases haven’t all hit yet. 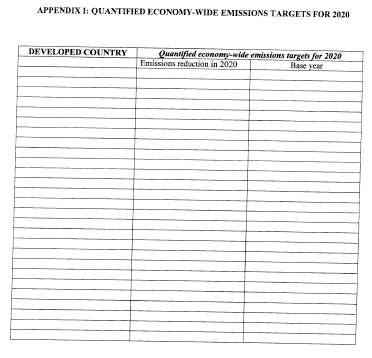 END_OF_DOCUMENT_TOKEN_TO_BE_REPLACED

The mysterious emissions trajectories implicit in the various draft COP15 agreements got me thinking about the economic implications of various paths. Suppose the following scenario, consistent with the Beijing draft (Copenhagen Accord) or recent KP draft actually happened:

In that case, price of carbon would be very high in the developed world, and very low in the developing world. That creates intense pressure for leakage. Emissions-intensive industries would simply relocate to developing countries. Total emissions wouldn’t necessarily go down, except to the extent that relocated capital was newer and cleaner, and might even go up due to greater transport distance and less stringent environmental regulation.

Another consequence is that investors in the developing world, including governments investing in infrastructure, would proceed to build GHG-intensive capital that would just have to be unbuilt in a decade or two. That’s not development; it’s unsustainable lock-in to a dead-end economic, technical, and lifestyle trajectory.

Probably the first thing to happen would be for workers (aka voters) in the developed world to freak out at the resulting job losses, causing the whole agreement to unravel. So, I think you can scratch this kind of arrangement off the list of possible or attractive agreements. If we want to achieve the underlying development goals that motivate people to ask for such things, we need to find a different path.