I’m wandering through my archives, looking for interesting stuff to follow up on. I ran across A Titanic Feedback Reversal. The Backwards Brain Bicycle is a fun implementation of the problem that sank the Titanic:

Mylan Pharmaceuticals is in the news for taking the price of EpiPens, which contain about $1 of active ingredient, to stratospheric levels. I think Bloomberg broke the story, and the NY Times has the latest.

The rate of increase is not that far from the health care inflation rate in general, except that in this case, there’s no obvious underlying cost driver, hence the allegations of gouging.

Here’s a first cut at the structure of the problem: 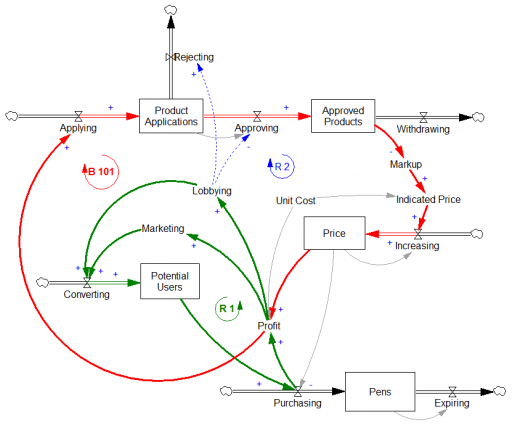 Econ 101 says that high profits should attract competition, putting downward pressure on prices (loop B 101). However, that’s not happening, because the FDA is the gatekeeper on product approval. It’s not clear to me whether the FDA just makes the approval delay systematically long and uncertain, or that it’s actually captive to Mylan lobbyists and holding new entrants to higher standards, as some hint (that would be a reinforcing loop, R2). Either way, the only loop that’s functioning is Mylan’s reinvestment in marketing and lobbying to create demand (R 1).

This reminds me of California’s electricity market deregulation debacle, which created a wholesale power market without corresponding retail price elasticity. Utilities were stranded between hammer (floating generation prices) and anvil (fixed demand). The resulting mess was worse than might have occurred in either a more or less deregulated market.

Similarly, to bring this market under control, you’d either have to get the FDA out of the way, restoring the balancing loop, or regulate the price side of the market, constraining the reinforcing loop. In this case, it may be the court of public opinion that puts the brakes on, adding a balancing loop of bad press that has so far cost Mylan dearly in investor confidence, if nothing else.

Mylan responds to gouging allegations rather unconvincingly, I think. Their CEO argues that the problem is multiple markups in the supply chain, subsidization of Europe, and R&D. It’s hard to square those external-cause arguments with Mylan’s financials.

My posting rate unintentionally fell off a cliff a couple years back. I got busy working on Ventity, and one thing led to another …

Anyhow, I’ve migrated the site to a new host, and merged my Model Library into the content. I’m working on some substantive posts – it’s a good opportunity to reflect on new developments.