In formulating a model of an industrial operation, we suggest that the system be treated, at least initially, on the basis of continuous flows and interactions of the variables. Discreteness of events is entirely compatible with the concept of information-feedback systems, but we must be on guard against unnecessarily cluttering our formulation with the detail of discrete events that only obscure the momentum and continuity exhibited by our industrial systems.

In beginning, decisions should be formulated in the model as if they were continuously (but not implying instantaneously) responsive to the factors on which they are based. This means that decisions will not be formulated for intermittent reconsideration each week, month or year. For example, factory production capacity would vary continuously, not by discrete additions. Ordering would go on continuously, not monthly when the stock records are reviewed.

There are several reasons for recommending the initial formulation of a continuous model:

These comments should never be construed as suggesting that the model builder should lack interest in the microscopic separate events that occur in a continuous-flow channel. The course of the continuous flow is the course of the separate events in it. By studying individual events we get a picture of how decisions are made and how the flows are delayed. The study of individual events is on of our richest sources of information about the way the flow channels of the model should be constructed. When a decision is actually being made regularly on a periodic basis, like once a month, the continuous-flow equivalent channel should contain a delay of half the interval; this represents the average delay encountered by information in the channel.

The preceding comments do not imply that discreteness is difficult to represent, nor that it should forever be excluded from a model. At times it will become significant. For example, it may create a disturbance that will cause system fluctuations that can be mistakenly interreted as externally generated cycles (…). When a model has progressed to the point where such refinements are justified, and there is reason to believe that discreteness has a significant influence on system behavior, discontinuous variables should then be explored to determine their effect on the model. 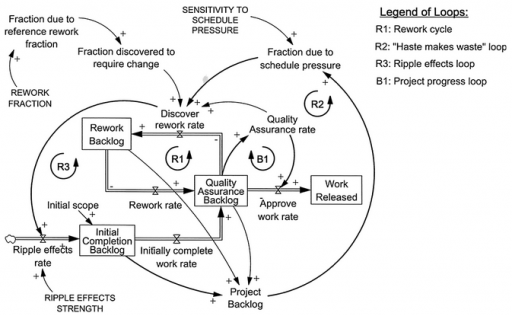 … the persistence of large project delays implies that their importance has not been fully recognized and incorporated into practice. Traditional project management methods do not explicitly consider the effects of feedback (Pena-Mora and Park, 2001). Project managers may intuitively include some impacts of feedback loops when managing projects (e.g. including buffers when estimating activity durations), but the accuracy of the estimates is very dependent upon the experience and judgment of the scheduler (Sterman, 1992). Owing to the lack of a widely used systematic approach to incorporating the impacts of feedback loops in project management, the interdependencies and dynamics of projects are often ignored. This may be due to a failure of practicing project managers to understand the role and significance of commonly experienced feedback structures in determining project schedule performance. Practitioners may not be aware of the sizes of delays caused by feedback loops in projects, or even the scale of impacts. …

In the current work, a simple validated project model has been used to quantify the schedule impacts of three common reinforcing feedback loops (rework cycle, “haste makes waste”, and ripple effects) in a single phase of a project. Quantifying the sizes of different reinforcing loop impacts on project durations in a simple but realistic project model can be used to clearly show and explain the magnitude of these impacts to project management practitioners and students, and thereby the importance of using system dynamics in project management.

This is a more formal and thorough look at some issues that I raised a while ago, here and here.

I think one important aspect of the model outcome goes unstated in the paper. The results show dominance of the rework parameter:

The graph shows that, regardless of the value of the variables, the rework cycle has the most impact on project duration, ranging from 1.2 to 26.5 times more than the next most influential loop. As the high level of the variables increases, the impact of “haste makes waste” and “ripple effects” loops increases. 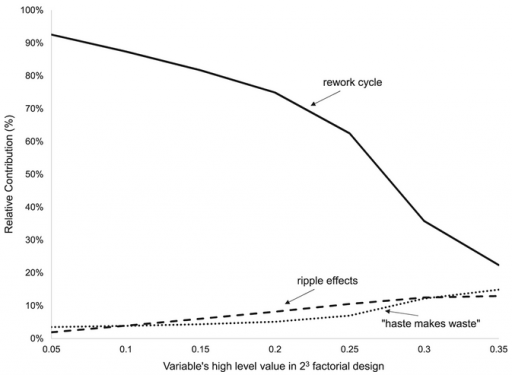 Yes, but why? I think the answer is in the nonlinear relationships among the loops. Here’s a simplified view (omitting some redundant loops for simplicity): 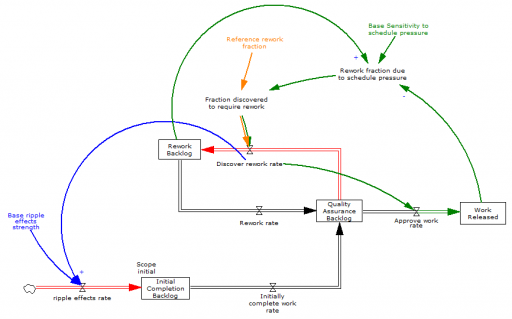 Project failure occurs when it crosses the tipping point at which completing one task creates more than one task of rework (red flows). Some rework is inevitable due to the error rate (“rework fraction” – orange), i.e. the inverse of quality. A high rework fraction, all by itself, can torpedo the project.

The ripple effect is a little different – it creates new tasks in proportion to the discovery of rework (blue). This is a multiplicative relationship,

which means that the ripple effect can only cause problems if quality is poor to begin with.

Similarly, schedule pressure (green) only contributes to rework when backlogs are large and work accomplished is small relative to scheduled ambitions. For that to happen, one of two things must occur: rework and ripple effects delay completion, or the schedule is too ambitious at the outset.

With this structure, you can see why rework (quality) is a problem in itself, but ripple and schedule effects are contingent on the rework trigger. I haven’t run the simulations to prove it, but I think that explains the dominance of the rework parameter in the results. (There’s a followup article here!)

There’s a nice description of the tipping point dynamics here.

I just picked up a copy of Hartmut Bossel’s excellent System Zoo 1, which I’d seen years ago in German, but only recently discovered in English. This is the first of a series of books on modeling – it covers simple systems (integration, exponential growth and decay), logistic growth and variants, oscillations and chaos, and some interesting engineering systems (heat flow, gliders searching for thermals). These are high quality models, with units that balance, well-documented by the book. Every one I’ve tried runs in Vensim PLE so they’re great for teaching.

I haven’t had a chance to work my way through the System Zoo 2 (natural systems – climate, ecosystems, resources) and System Zoo 3 (economy, society, development), but I’m pretty confident that they’re equally interesting.

You can get the models for all three books, in English, from the Uni Kassel Center for Environmental Systems Research – it’s now easy to find a .zip archive of the zoo models for the whole series, in Vensim .mdl format, on CESR’s home page: www2.cesr.de/downloads.

To tantalize you, here are some images of model output from Zoo 1. First, a phase map of a bistable oscillator, which was so interesting that I built one with my kids, using legos and neodymium magnets: 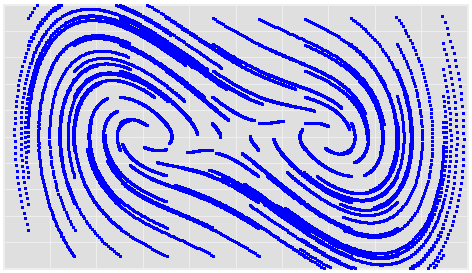 END_OF_DOCUMENT_TOKEN_TO_BE_REPLACED

MIT’s Climate Collaboratorium has posted java code that it used to wrap C-LEARN as a web service using the multicontext .dll. If you’re doing something similar, you may find the code useful, particularly the VensimHelper class. The liberal MIT license applies. However, be aware that you’ll need a license for the Vensim multicontext .dll to go with it.

Target audience: People interested in the concept of payments for environmental services as a means of improving land use and conservation of natural resources.