A brilliantly weird take on causality:

It even has an implementation of the systems thinking classic “domino guy” cartoon: 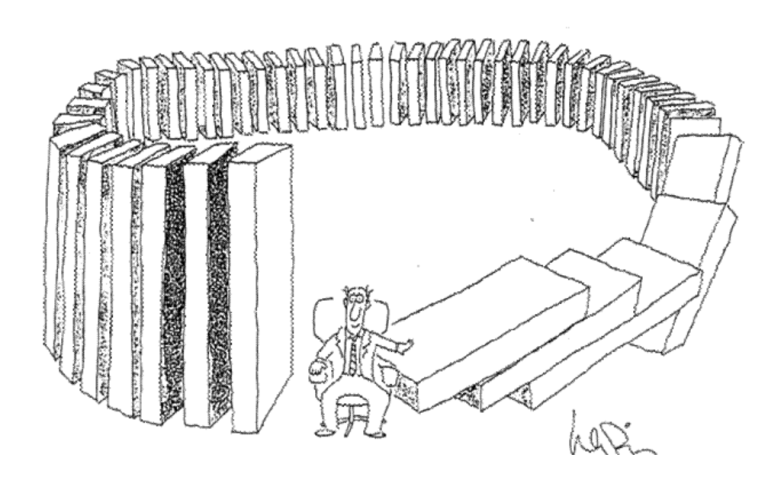 Statistical tests only make sense when the assumed distribution matches the data-generating process.

Benford’s Law describes the distribution of first digits when the set of numbers evaluated derives from a scale-free or Power Law distribution spanning multiple orders of magnitude. Lots of processes generate numbers like this, including Fibonacci numbers and things that grow exponentially. Social networks and evolutionary processes generate Zipf’s Law, which is Benford-conformant.

Here’s the problem: vote counts may not have this property. Voting district sizes tend to be similar and truncated above (dividing a jurisdiction into equal chunks), and vote proportions tend to be similar due to gerrymandering and other feedback processes. This means the Benford’s Law assumptions are violated, especially for the first digit.

This doesn’t mean the analysis can’t be salvaged. As a check, look at other elections for the same region. Check the confidence bounds on the test, rather than simply plotting the sample against expectations. Examine the 2nd or 3rd digits to minimize truncation bias. Best of all, throw out Benford and directly simulate a distribution of digits based on assumptions that apply to the specific situation. If what you’re reading hasn’t done these things, it’s probably rubbish.

This is really no different from any other data analysis problem. A statistical test is meaningless, unless the assumptions of the test match the phenomena to be tested. You can’t look at lightning strikes the same way you look at coin tosses. You can’t use ANOVA when the samples are non-Normal, or have unequal variances, because it assumes Normality and equivariance. You can’t make a linear fit to a curve, and you can’t ignore dynamics. (Well, you can actually do whatever you want, but don’t propose that the results mean anything.)

I think there’s a lot in Marsalis’ commentary that will make sense to systems thinkers. Listen to the person next to you. Stay optimistic, but mindful of the problem. Confronted by crisis, transform your paradigm. And of course it’s a beautiful tune.

The most convincing thing about mainstream climate science is not that the models are so good, but that the alternatives are so bad.

Climate skeptics have been at it for 40 years, but have produced few theories or predictions that have withstood the test of time. Even worse, where there were once legitimate measurement issues and model uncertainties to discuss, as those have fallen one by one, the skeptics are doubling down on theories that rely on “alternative” physics. The craziest ideas get the best acronyms and metaphors. The allegedly skeptical audience welcomes these bizarre proposals with enthusiasm. As they turn inward, they turn on each other.

The latest example is in the Lungs of Gaia at WUWT:

A fundamental concept at the heart of climate science is the contention that the solar energy that the disk of the Earth intercepts from the Sun’s irradiance must be diluted by a factor of 4. This is because the surface area of a globe is 4 times the interception area of the disk silhouette (Wilde and Mulholland, 2020a).

This geometric relationship of divide by 4 for the insolation energy creates the absurd paradox that the Sun shines directly onto the surface of the Earth at night. The correct assertion is that the solar energy power intensity is collected over the full surface area of a lit hemisphere (divide by 2) and that it is the thermal radiant exhaust flux that leaves from the full surface area of the globe (divide by 4).

Setting aside the weird pedantic language that seems to infect those with Galileo syndrome, these claims are simply a collection of errors. The authors seem to be unable to understand the geometry of solar flux, even though this is taught in first-year physics.

The authors’ notion of “divide by 2” resulting in 1368/2 = 684 w/m^2 average is laughable because it implies that the sun is somehow like a luminous salad bowl that delivers light at 1368 w/m^2 normal to the surface of one side of the earth only. That would make for pretty interesting sunsets.

In any case, none of this has much to do with the big climate models, which don’t “dilute” anything, because they have explicit geometry of the earth and day/night cycles with small time steps. So, all of this is already accounted for.

To his credit, Roy Spencer – a hero of the climate skeptics movement of the same magnitude as Richard Lindzen – arrives early to squash this foolishness:

How can some people not comprehend that the S/4 value of solar flux does NOT represent the *instantaneous* TOA illumination of the whole Earth, but instead the time-averaged (1-day or longer) solar energy available to the whole Earth. There is no flat-Earth assumption involved (in fact, dividing by 4 is because the Earth is approximately spherical). It is used in only simplistic treatments of Earth’s average energy budget. Detailed calculations (as well as 4D climate models as well as global weather forecast models) use the full day-night (and seasonal) cycle in solar illumination everywhere on Earth. The point isn’t even worth arguing about.

Responding to the clueless authors:

Oh, my, Philip… you cannot be serious.

Every one of the 24+ climate models run around the world have a full diurnal cycle at every gridpoint. This is without question. For example, for models even 20+ years ago start reading about the diurnal cycles in the models on page 796 of the following, which was co-authored by representatives from all of the modeling groups: https://www.ipcc.ch/site/assets/uploads/2018/02/WG1AR5_Chapter09_FINAL.pdf

Philip, Ed Bo has hit the nail on the head. Your response to him suggests you do not understand even the basics of climate modeling, and I am a little dismayed that your post appeared on WUWT.

Undeterred, the WUWT crowd then proceeds to savage anyone, including their erstwhile hero Spencer, who dares to challenge the new “divide by 2” orthodoxy.

Dr roy with his fisher price cold warms hot physics tried to hold the line for the luke-warmers, but soon fecked off when he knew he would be embarrassed by the grown-ups in the room…..

This is not the first time a WUWT post has claimed to overturn climate science. There are others, like the 2011 Unified Theory of Climate. It’s basically technobabble, notable primarily for its utter obscurity in the nine years following. It’s not really worth analyzing, though I am a little curious how a theory driven by static atmospheric mass explains dynamics. Also, I notice that the perfect fit to the data for 7 planets in Fig. 5 has 7 parameters – ironic, given that accusations of overparameterization are a perennial favorite of skeptics. Amusingly, one of the authors of the “divide by two” revolution (Wilde) appears in the comments to point out his alternative “Unifying” Theory of Climate.

Are these alternate theories in agreement, mutually exclusive, or just not even wrong? It would be nice if skeptics would get together and decide which of their grand ideas is the right one. Does atmospheric pressure run the show, or is it sunspots? And which fundamentals that mathematicians and physicists screwed up have eluded verification for all these years? Is it radiative transfer, or the geometry of spheres and disks? Is energy itself misdefined? Inquiring minds want to know.

The bottom line is that Roy Spencer is right. It isn’t worth arguing about these things, any more than its worth arguing with flat earthers or perpetual motion enthusiasts. Engaging will just leave you wondering if proponents are serious, as in seriously deluded, or just yanking your chain while keeping a straight face.