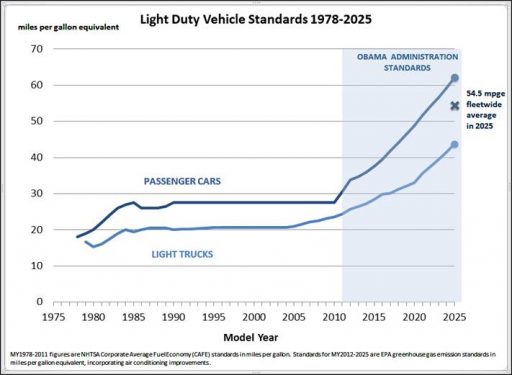 The result has been counterintuitive. But before looking at the outcome, let me correct a misconception. The chart above refers to the “fleetwide average” – but this is the new vehicle fleetwide average, not the average of vehicles on the road. Of course it is the latter that matters for CO2 emissions and other outcomes. The on-the-road average lags the standards by a long time, because the fleet turns over slowly, due to the long lifetime of vehicles. It’s worse than that, because actual performance lags the standards due to loopholes and measurement issues. The EPA puts the 2017 model year here: 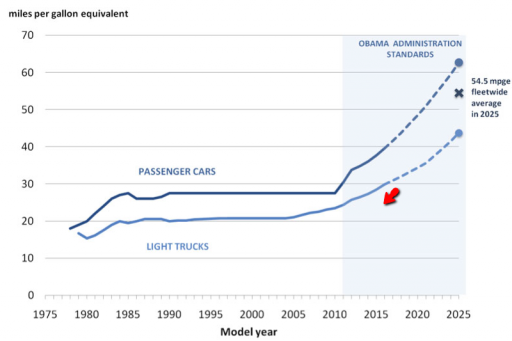 But wait … it’s still worse than that. Notice that the future fleetwide average is closer to the car standard than to the truck standard: 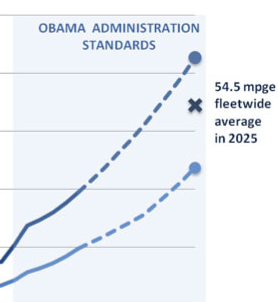 That implies that the market share of cars is more than 50%. But look what’s been happening: 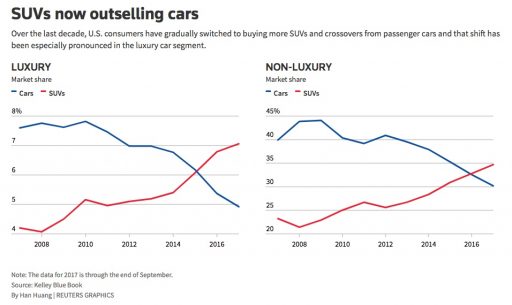 The market share of cars is collapsing. (If you look at longer series, it looks like the continuation of a long slide.) Presumably this is because, faced with consumer appetites guided by cheap gas and a standards gap between cars and trucks, automakers are doing the rational thing: they’re dumping their cars fleets and switching to trucks and SUVs. In other words, they’re moving from the upper curve to the less-constrained lower curve: 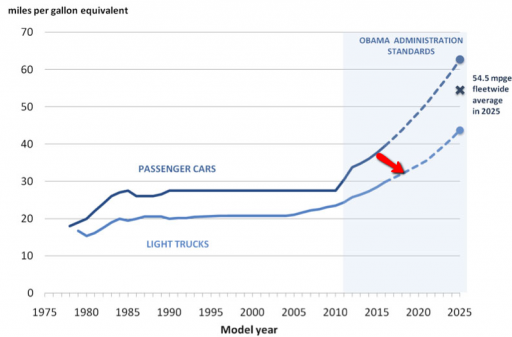 It’s actually worse than that, because within each vehicle class, EPA uses a footprint methodology that essentially assigns greater emissions property rights to larger vehicles. 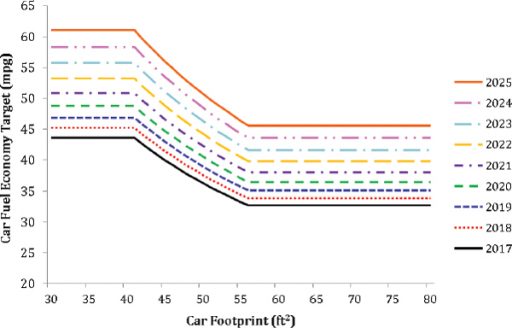 So, while the CAFE standards seemingly require higher performance, they simultaneously incentivize behavioral responses that offset much of the improvement. The NRC actually wondered if this would happen when it evaluated CAFE about 5 years ago.

I think it’s safe to say that yes, we’re seeing exactly these effects in the US fleet. That makes aggregate progress on emissions rather glacial. Transportation emissions are currently rising, interrupted only by the financial crisis. That’s because we’re not working all the needed leverage points in the system. We have one rule (CAFE) and technology (EVs) but we’re not doing anything about prices (carbon tax) or preferences (e.g., walkable cities). We need a more comprehensive approach if we’re going to beat the unintended consequences.

This is a great talk by Nate Osgood on the intersection of systems and complexity with data science and machine learning:

Tesla’s strategy of building electric cars that are simply better than conventional cars has worked brilliantly. They harnessed lust for raw power in service of greener tech (with the help of public subsidies – the other kind of green involved).

That was great, but now it’s time to grow up. Not directly emitting CO2 just isn’t good enough. If personal vehicle transport continues to grow exponentially, it will just run into other limits, especially because renewable electricity is not entirely benign.

The trucks on the horizon are perfect examples. The Cybertruck consumes nearly twice the energy per mile of a Model 3 (and presumably still more if heavily loaded, which is kind of the point of a truck). That power is cheap, so anyone who can afford the capital cost can afford the juice, but if it’s to be renewable, it’s consuming scarce power that could be put to greener purposes than stroking drivers’ egos. It’s also consuming more parking and road space and putting more rubber into waters.

When you consider in addition the effects of driving automation on demand, you get a perfect storm of increased depletion, pollution, congestion and other side effects.

The EV transition isn’t all bad – it’s a big climate mitigation enabler. But I think we could find wiser ways to apply technology and public money that don’t simply move the externalities to other areas.