If sustained, such a shift would signal a very significant sensitivity of vehicle efficiency purchasing habits to fuel prices – perhaps much larger than the low short run price elasticity of gasoline demand. However, I think there is reason to interpret these recent events cautiously, lest they prove a little less astonishing in the long run.

The mental model behind high sensitivity of vehicle purchasing to fuel prices is something like the following:

Here, the vehicle fleet is segmented into cars and trucks (which could be equally well labeled sippers and guzzlers, etc.). Vehicles wear out over time; as they do, owners replace them by buying new ones. As a simplification, there’s no growth of the fleet – either due to owner’s increased desire for vehicles or an increase in the number of owners. The key determinant of the car/truck balance then is the share of cars among new vehicles purchased, which in turn is a function of the price of fuel relative to some baseline. Owners’ sensitivity to fuel prices is captured by a parameter.

When fuel prices double overnight, as below, the market share of new cars increases overnight too. Because the fleet is large relative to annual sales (because the vehicle life is 15 years), it takes a long time for the share of cars in the fleet to adjust to the new equilibrium (ordinarily the rule of thumb for stock adjustment processes would suggest that it would take 45 years to make 95% of the adjustment, but the real vehicle fleet isn’t really a first-order stock, so that doesn’t exactly hold). 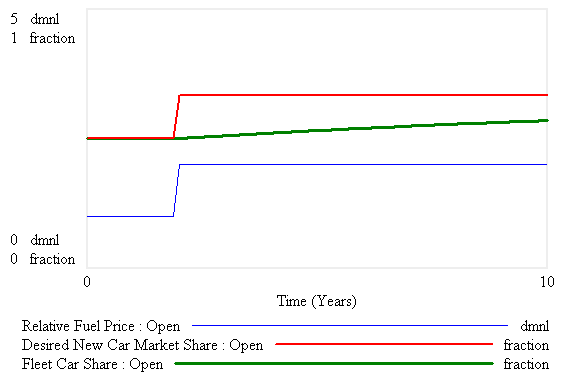 However, this behavior seems a little unreal. It implies, for example, that a new vehicle buyer is unaware of or unresponsive to the existing stock of vehicles. In reality, of course, there is a used car market and owners are well aware of vehicles already present in their own fleet at home in the driveway. Transportation services are provided by the total fleet of cars and trucks in existence, not just new ones. The NYT article suggests one way this might work:

Dave Strom of South Boston, Va., recently bought a tiny Smart ForTwo Passion Coupe, made by Daimler, the German automaker.
Mr. Strom also owns a pickup truck, which he uses mainly to haul his boat. When he runs errands, he drives his Smart, which he says is getting 45 miles a gallon.

Thus the new purchase decision ought to be responsive to existing vehicle stocks. An alternative formulation of the situation above, closing feedback loops between the fleet and sales, is:

This time, owners desire a certain distribution of cars and trucks in the fleet as a whole, rather than just a certain distribution of new car and truck purchases. They take action accordingly: they buy a given vehicle type not only to replace discards, but also to adjust the stock of that vehicle towards the desired level. The speed of that adjustment process is given by the fleet adjustment time. Now, the dynamics are somewhat different. For the same sensitivity and change in price as our last experiment, the fleet adjustment is now much faster: 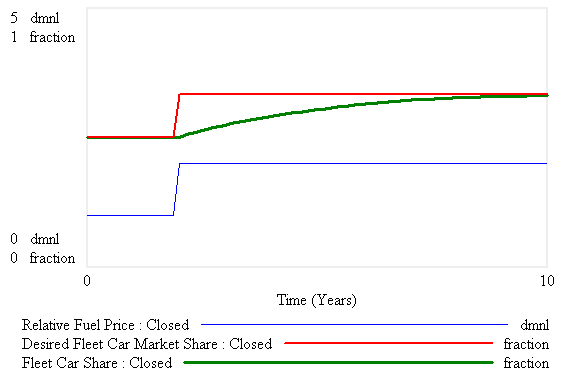 That’s because vehicle owners are now actively managing the fleet. When fuel prices rise, they quit buying trucks, and stock up on cars: 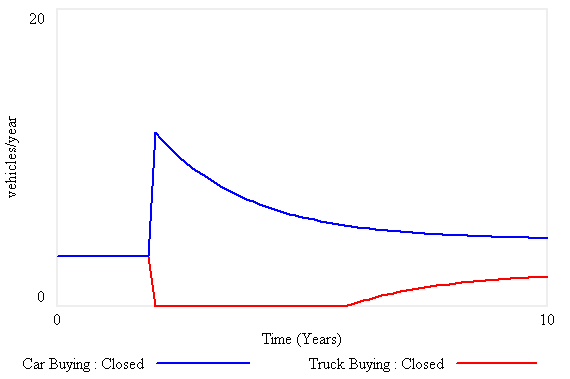 Even though the two models have the same long-term equilibrium response (as long as the fuel price sensitivity is the same), they have a very different transient response. The active stock adjustment in the closed-loop sales model leads to a much larger short-term effect on the sales and market share of new cars: 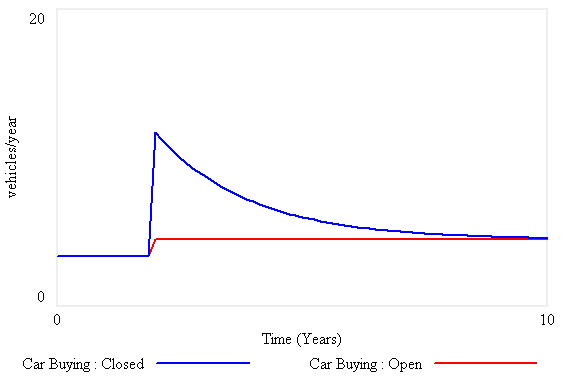 If the new, closed-loop model is to conform to the same data over a short period of time (e.g., a year just after the fuel price increase), then consumers’ sensitivity to fuel prices must be much lower to yield a similar sales trajectory. How much less sensitive consumers are depends on the size of the amplification effect of the fleet, which is a function of behavior (the time over which consumers make adjustments to the fleet) and physics (the lifetime of vehicles). With a fifteen year vehicle life and a two year adjustment time, matching the instantaneous response would require a sensitivity of -0.133 (vs. -1.0 in the open-loop model).

So, what does this all mean? I think it means that the current spike in small car sales and plummeting large car sales are partly a disequilibrium effect, so we’re not yet seeing the kind of fuel prices that would produce a large long-run shift in vehicle efficiency preferences. Also, this feedback effect is just the tip of the iceberg. There are many others. If current conditions persist, owners won’t all idle their trucks, like Dave Strom; some will sell them. As the inventory of used guzzlers grows, prices will fall, making it viable to put some of them to use in spite of their high fuel cost. A secondary market flooded with large vehicles will put further pressure on manufacturers. On the flip side, small car makers will command premium prices. The feedback richness of the situation suggests a treacherous landscape for simplistic estimates of consumer behavior; getting policies like California’s Low Carbon Fuel Standard right will require a full appreciation of the complexity and a healthy dose of robustness.