Recently Pielke, Wigley and Green discussed the implications of autonomous energy efficiency improvements (AEEI) in IPCC scenarios, provoking many replies. Some found the hubbub around the issue surprising, because the assumptions concerned were well known, at least to modelers. I was among the surprised, but sometimes the obvious needs to be restated loud and clear. I believe that there are several bigger elephants in the room that deserve such treatment. AEEI is important, as are other hotly debated SRES choices like PPP vs. MEX, but at the end of the day, these are just parameter choices. In complex systems parameter uncertainty generally plays second fiddle to structural uncertainty. Integrated assessment models (IAMs) as a group frequently employ similar methods, e.g., dynamic general equilibrium, and leave crucial structural assumptions untested. I find it strange that the hottest debates surround biogeophysical models, which are actually much better grounded in physical principles, when socio-economic modeling is so uncertain.

In my 1997 dissertation I wrote about convergent thinking in IAMs:

In some ways, though, most integrated models are convergent. This is particularly evident (and potentially troublesome) in their social and economic systems, where there is probably more structural uncertainty than in the physical systems of climate or greenhouse gas cycles. Most of these similarities can be attributed to the roots of integrated models in the economic tradition of energy modeling. Specifically, most integrated models share the following attributes, at least in their central scenarios:

Obviously, not all integrated models fit the characterization above perfectly. ’¦

Fast forward to 2008. Among the structural issues above, there has been a lot of progress on endogenous technology, but others remain largely unaddressed. Most models still assume equilibrium and, frequently, perfect foresight. Behavioral and agent-based models are conspicuously absent from the portfolio. Population is not normally up for discussion. GDP=happiness, and lifestyle changes are not considered. Climate is decoupled from energy security, health, and other environmental problems. Increases in computing power have largely been consumed by greater detail, rather than deeper exploration of uncertainty. A friend involved in the first SRES round was frustrated by participants’ unwillingness to consider the meaning of GDP at $100,000/person/yr in 2100 or to consider deviant or disastrous scenarios. A symptom of the failure to fully explore the problem space is the following: 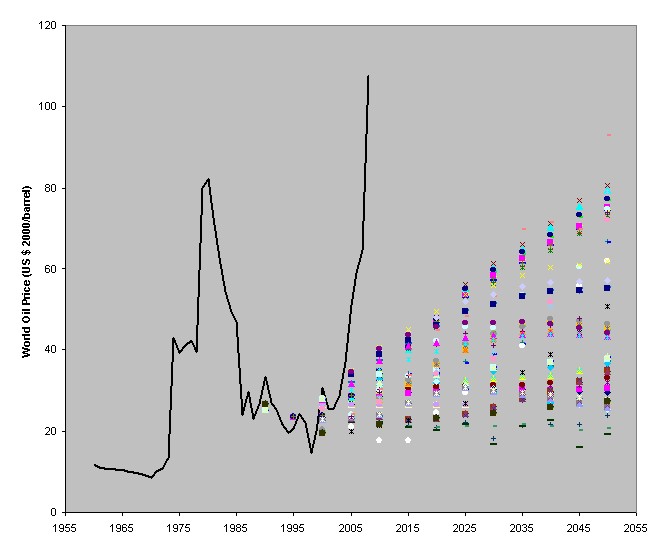 One can regard the current runup in oil prices as a sign of depletion, or as just another transient capital cycle triggered by OPEC strategic behavior. The problem is that prevailing models all take similar views of the problem, leaving us vulnerable to unexplored alternatives.

In ’97 I tested the implications of oil and gas depletion for climate policy. Peak oil wasn’t a very hot topic at the time, and belief in optimal depletion was widespread. I found that nearly all models either ignored depletion altogether (as in the original DICE model), assumed some elasticity around an exogenous depletion trajectory (as in EPPA at the time), or assumed optimal depletion and large backstop resources (CONNECTICUT/Yohe and Global 2100). Those assumptions are problematic, particularly because there is little evidence that real-world resource managers behave in an optimal fashion. The assumption of continued oil abundance can be seen in the world oil price trajectories in the models in the IPCC SRES database (a version is here):

One implication relates to the Pielke-Wigley-Green critique of autonomous decarbonization:

One important consequence of depletion is that the trend in decarbonization ofenergy assumed by Nordhaus (1994) and others may eventually reverse, as oil and gas are depleted and energy demand shifts to high-carbon solid and synthetic fuels.

That’s not the biggest issue though. Depletion of oil and gas interacts with the trajectory of technology and the impact of carbon taxes. A carbon tax policy, in isolation, can be harmful if oil and gas resource managers are myopic, in which case the carbon policy could provoke a rush to gas, accelerating the disruption that occurs when it is (rather suddenly) depleted:

If there is no climate change, one would expect a carbon tax to reduce welfare. The surprising outcome is that a large carbon tax may be less damaging than a small tax, and that the optimal carbon tax is actually slightly negative (see Figure 99). This occurs because of the assumption that the opportunity cost of depletion of oil and gas is not correctly reflected in prices. A carbon tax of 200-400 $/TonC shifts energy demand from coal onto oil and gas more than it reduces aggregate energy demand, because the interfuel substitution potential is greater than the capital-energy substitution potential. Thus the carbon tax increases demand for oil and gas, even though they are carbon-based fuels. Accelerating the depletion of these (undervalued) fuels adds to the losses from the allocative inefficiency caused by the tax.
A large carbon tax suppresses aggregate energy demand enough to slow depletion, creating a local optimum at a tax of 900 $/TonC. However, at this high tax, welfare is still significantly lower than with the globally optimal tax of -20 $/TonC. The negative tax’”in effect a subsidy on carbon-based fuels’”is beneficial because it shifts demand to coal, slowing the depletion of oil and gas.

One implication is that good resource management is an essential component of carbon policy. More generally, without a broad exploration of behavior, not just as it ought to be, but with realistic foibles, the policy landscape may be quite different, and more treacherous, than commonly assumed.

[Update: forgot to mention that I have a list of IAMs here]