Given its large global presence in 2015, by any measure, China’s posture in the negotiations was critical. The Climate Game Times reported: 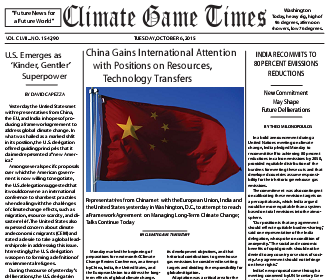 China put forth a set of principles yesterday that will guide today’s continued negotiations on migration, disaster relief, resource scarcity, and emissions reductions…. These principles included statements that China’s efforts in these areas will be consistent with its development objectives, and that historical contributions to greenhouse gas emissions be considered in setting targets and dividing the responsibility for global mitigation.
…
In perhaps the most important detail to emerge from yesterday’s negotiations, the China team will continue to lead in pushing for technology transfers for mitigation and adaptation measures, particularly in emissions reductions, in land use and forestry, and in agriculture so as to encourage a new ‘green revolution.’

I spent much of my time sitting in on the China team’s deliberations. The discussion was very realistic when viewed in the light of 2008 developing country positions, but I began to wonder whether that position could lead to a good outcome for the people of China. Some underlying assumptions that trouble me:

Grow as fast as possible, and let the Kuznets Curve take care of the environment. The environmental Kuznets Curve (eKC) is a contested observation that pollution intensity is related to GDP in an upside-down U-shape. Thus things get dirtier as a country develops, until it can afford to clean up. There isn’t much evidence that the eKC trajectory is causal, optimal, or necessary (one would hope not, in cases where the top of the business-as-usual U is at an untenable pollution level, as with China’s CO2 emissions). In any case, there’s no evidence that the eKC by itself will lead to large absolute reductions in emissions.

Coal can fuel growth forever. China’s coal reserves are big, but not that big. If coal is to sustain growing electricity demand and eventually make up for scarce liquid fuels, China will have to mine deposits that are deeper, more remote, thinner, and higher in sulfur. That will increase environmental and health impacts, stress on rail transport, and water consumption. Advanced coal technologies will help delay the day of reckoning, but that day should be contemplated in current decisions.

China’s industrial structure requires special treatment. Players noted that China has become an industrial hub for the world, and argued that targets should give credit for that. Well, yes and no. Targets probably do need to take account of economic structure, which is a partly a matter of choice and partly a matter of natural endowments. But that shouldn’t mean industry gets a free ride. Industry, and industrial regions, should face the same marginal cost of emissions as any other sector or region. If Chinese industry is really so valuable to the world, a price on GHGs will drive up the price of industrial output until it’s worth it to keep China’s share active.

Technology transfer is needed and will help. The coolest high-tech low-carbon technology I’ve seen lately is the Judith Gap wind farm, with a hundred 1-MW GE turbines. I think the Judith Gap blades came from Brazil, but GE now makes turbines in China. So, yes, it helps if the intellectual property rights needed are available to promote wind development in China. But I rather doubt that IP is the principal barrier. If power sources really paid their own way in China, facing competitive markets, internalized externalities, and strong institutions, wind would probably be viable (though efficiency might kick in first). In other areas, I’m not sure the developed world has a lot to offer. Should we transfer the technology for large SUVs and sprawling suburbs? Perhaps China would be better off leapfrogging the developed world and inventing its own future. Certainly there are general-purpose technologies that would be useful (like advanced materials), but those are also subject to rebound effects. Some advanced technologies have dual uses, and defense agencies may balk at transferring them.

Mitigation is costly. As I was composing this, Amory Lovins wrote to Drew Jones, wishing for a paradigm shift from costly, burdensome emissions cuts to innovative business strategies, technologies, and public policies that yield profitable reductions, making costly measures superfluous. He pointed to the preface to the new Chinese edition of Winning the Oil Endgame. A few excerpts:

China in 2001 used just 10% of world energy, rather than 25%, because China used two-thirds less energy to produce a unit of GDP in 2001 than in 1978’”a steep and sustained ‘intensity’ reduction, by over 5% per year, probably unprecedented in world history. Economic growth averaged 9% a year, reported energy growth only 4% a year, enabling China’s economy to grow eightfold without much strain on energy resources. So why did China’s ratio of energy demand growth to economic growth then reverse from 0.5 during 1978’“2000 to 1.5 during 2001’“06’”a slight but worrying interruption of the previously stunning and steady drop in energy intensity?

Surprisingly, this setback was caused only modestly by growth in air conditioning, cars, etc.’” by consumption-led demand for oil, gas, and electricity. Such demand is already significant and will mainly drive China’s energy future. But the chief cause of recent demand growth is instead structural: a dramatic reversal of China’s previous shift from heavy to light industry. Suddenly China changed to a very unusual development pattern dominated by basic materials production.
…
Why, then, did China’s development shift after 2001 from a successful pattern, which had enriched its people for a quarter-century by using abundant labor, to a riskier new pattern that creates relatively few jobs but relies on globally scarcer resources’”energy, raw materials, capital, and technology? The answer is complex but appears to rest on skewed prices for capital, land rights, energy, water, and environmental capacity, all reinforced by local and inter-Provincial rivalries, regional governments’ pressures to meet aggregate economic growth targets, highly fragmented industries, inconsistencies between national goals and local results, and opaque statistics. Unfortunately these patterns and forces are politically self-reinforcing, driven by firms far more powerful than government agencies, and hence are not easy to correct.

However, correcting them’”to manage energy, security, and environmental needs, rebalance external trade, and correct harmful macroeconomic distortions’”is such a national imperative that big efforts are already underway. More efficient allocation mechanisms for capital and for land rights are being intensively discussed. Environmental and public health challenges may cause pollution costs to be internalized sooner than expected. As these factors of production become costlier, so, probably, will energy, raw materials, labor, and even technology (as intellectual property protection matures). …

Together, these trends seem likely in the medium term to correct China’s structural over-allocation into energy-intensive materials production. The main cause of the temporary stall in energy savings during 2001’“06 would thus disappear; some progress is already emerging. But then the chief cause of energy demand growth would shift from producing to using those energy-intensive raw materials’”making them into buildings and consumer goods whose operation could then raise long-term demand for both electricity and oil. That’s why the next few years are absolutely critical for making those new devices extremely efficient: otherwise they will lock in wasteful consumption for decades, imperiling China’s economy and environment.
…
Western cynics often claim that China cannot be expected to reduce its coal- and oil-burning or its carbon emissions’”that China will insist on repeating the same mistakes of inefficient use and old technology that America and the West have already made. I do not believe it. State Council member Professor Ma Hong taught me many years ago that without very efficient energy and resource use, China cannot afford to develop, because the supply-side investments will devour the budget. I think China’s leaders understand this and are striving to restore proper balance between investments in saving and in producing energy. That is why energy efficiency is the top strategic priority in the Eleventh Five-Year Plan. And since China’s growth focuses largely on building huge amounts of infrastructure, buildings, vehicles, and factories that can and must be designed for strong energy efficiency the first time, I see no reason why China couldn’t increase energy productivity even faster than its economy grows’”as the United States, already far more built-up and more energy-efficient, did in 2006 without even trying (wu wei). China has shining examples in green buildings and efficient factories; they just need wide and rapid emulation.

Wide and rapid emulation is one of a number of positive feedback loops that need to be unleashed in order to get to a low-emissions future. Others include learning curves and R&D, development of complementary assets (transport infrastructure, vehicles, and fueling systems for example), land use patterns, institutional power, and economies of scale. Emissions policy regarded dynamically is a process of tuning price signals and institutional barriers to trigger self-reinforcing processes that lock-in green technologies. If early emissions reductions are free or negative-cost, nations that fail to start down a low-emissions path suffer lost savings now on top of lost strategic opportunities in the future. If China (and the US, for that matter) could set aside the static view of mitigation as a costly end-of-pipe measure, there might be a lot more room for agreement in climate negotiations.