Are border carbon adjustments (BCAs) the wave of the future? Consider these two figures: 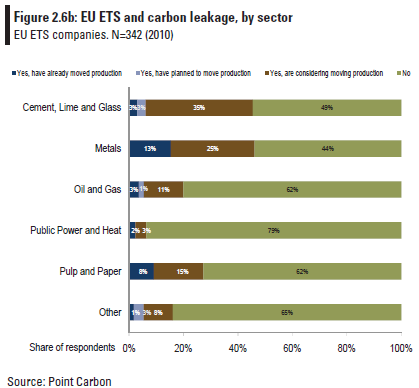 The first shows the scale of carbon embodied in trade. The second, even if it overstates true intentions, demonstrates the threat of carbon outsourcing. Both are compelling arguments for border adjustments (i.e. tariffs) on GHG emissions.

I think things could easily go this route: it’s essentially a noncooperative route to a harmonized global carbon price. Unlike global emissions trading, it’s not driven by any principle of fair allocation of property rights in the atmosphere; instead it serves the more vulgar notion that everyone (or at least every nation) keeps their own money.

Consider the pros and cons:

Advocates of BCAs claim that the measures are intended to address three factors. First, competitiveness concerns where some industries in developed countries consider that a BCA will protect their global competitiveness vis-a-vis industries in countries that do not apply the same requirements. The second argument for BCAs is ‘carbon leakage’ – the notion that emissions might move to countries where rules are less stringent. A third argument, of the highest political relevance, has to do with ‘leveraging’ the participation of developing countries in binding mitigation schemes or to adopt comparable measures to offset emissions by their own industries.

from a developing country perspective, at least three arguments run counter to that idea: 1) that the use of BCAs is a prima facie violation of the spirit and letter of multilateral trade principles and norms that require equal treatment among equal goods; 2) that BCAs are a disguised form of protectionism; and 3) that BCAs undermine in practice the principle of common but differentiated responsibilities.

In other words: the advocates are a strong domestic constituency with material arguments in places where BCAs might arise. The opponents are somewhere else and don’t get to vote, and armed with legalistic principles more than fear and greed.

2 thoughts on “The lure of border carbon adjustments”