I like green labeling, but I’m not convinced that, by itself,  it’s theoretically a viable way to get the economy to a good environmental endpoint. In practice, it’s probably even worse. Consider Energy Star. It’s supposed to be “helping us all save money and protect the environment through energy efficient products and practices.” The reality is that it gives low-quality information a veneer of authenticity, misleading consumers. I have no doubt that it has some benefits, especially through technology forcing, but it’s soooo much less than it could be.

The fundamental signal Energy Star sends is flawed. Because it categorizes appliances by size and type, a hog gets a star as long as it’s also big and of less-efficient design (like a side-by-side refrigerator/freezer). Here’s the size-energy relationship of the federal energy performance standard (which Energy Star fridges must exceed by 20%): 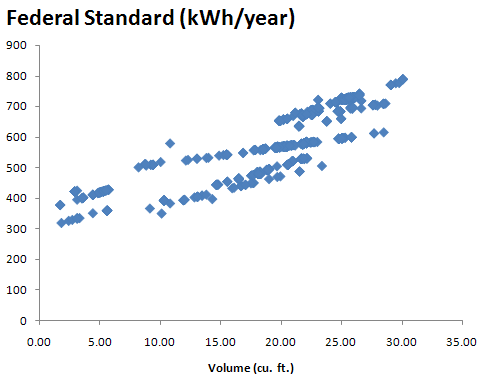 Notice that the standard for a 20 cubic foot fridge is anywhere from 470 to 660 kWh/year.

Here’s the size-performance relationship of all refrigerators (blue) vs. Energy Star (red): 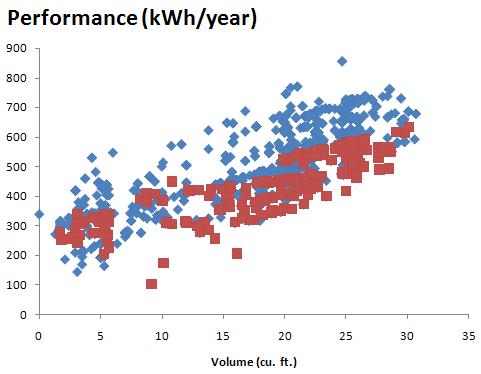 Notice that the best 28+ cu ft fridge consumes more energy than many non-qualifying sub-20 cu ft fridges. That sends a strange message to the consumer. (For the record, our new fridge is on the efficient frontier, except for the 3 outliers.)

At the large end, there seem to be many more non-compliant models. Perhaps this is because 10 to 20 cu ft fridges are cheap and therefore their energy bill is comparatively significant, while big fridges sell on their fancy features rather than energy performance. Certainly the more energy-intensive side of the spectrum is larded with premium brands, features like through-the-door ice access, and auxiliary uses like undercounter wine coolers.

The graph shows physics at work. Power per volume should be roughly inversely proportional to size, due to the surface area to volume ratio. That holds, roughly, with power = k*volume^(-0.65). One implication is that small fridges have abominable power consumption per volume (but still some get stars among their peers).

The infidelity of the star ratings to actual energy consumption is somewhat mitigated by the presence of $ energy cost ratings on appliances – that at least provides an absolute signal. However, there’s something fishy about the data above: it contains too many linear features to be real operational measurements. It suggests that manufacturers are making engineering estimates, or fudging tests, to magically arrive at compliance with standards. Worse, procedures involve huge departures from real operating conditions. Consumer Reports noted in 2008:

Energy Star has lost some luster

There’s an even larger difference between company claims and our measurements for the LG LMX25981ST French-door fridge. LG says it uses an Energy Star compliant 547 kWh per year. We found through our tests that real-life energy use would be more than double.

Why the energy-use gap? DOE procedures call for a refrigerator’s icemaker to be off during testing. On the LG, turning off the icemaker also shuts off cooling to the ice-making compartment, located on the refrigerator door.

In our preliminary tests with the icemaker off, the energy use we measured was much closer to LG’s figure. But that’s not how you’d use the feature at home since doing so melts all the ice. When we gauged energy use with the LG’s icemaker on, we got a consumption of 1,110 kWh per year.

This sounds like a classic case of regulatory capture. The real horror of it is that flawed energy ratings defeat the action of market-based energy and emissions price signals. Unlike gasoline prices, appliance energy consumption is not salient or easy to attribute in a household, so the yellow energy tag is almost the only energy information available to consumers. It ought to be reliable, not biased by a factor of two. Where are the class action entrepreneurs when you need them?