When I see policies that formally allocate political power in proportion to wealth, I think back to a game I played in college, called Starpower.

It’s a simple trading game, using plastic chips. It starts with a trading round, where everyone has a chance to improve their lot by swapping to get better combinations of size and color. After trading, scores are tallied, and the players are divided into three groups: Triangles, Circles, and Squares. Then there’s a vote, in which players get to change the rules of the game. There’s a catch though: the Squares, who reaped the most points in the first round, get more votes. Subsequent rounds follow the same steps (lather, rinse, repeat).

When I played, I was lucky enough in the first round to wind up in the top group, the Squares. In the subsequent vote, no one proposed any significant rule changes, so we went back to trading. One of our fellow Squares was unlucky or incautious enough to make a few bad trades, and wound up demoted to the Circles when scores were tallied. That was a wake-up call – a challenge to the camaraderie of Squares. We promptly changed the rules, to slightly favor the accumulation of chips by those who already had many; we bribed the middle Circles to go along with it. We breathed a collective sigh of relief when, after the next trading round, we found that we were all still Squares. Then, we Squares abandoned all egalitarian thoughts. With our increased wealth, we voted to allocate future chip distributions so that the Circle and Triangle classes would perpetually trade places, never accumulating enough wealth to reach elite Square status. It worked, at least until the end of class (we were probably “saved by the bell” from having a revolution).

The interesting thing about the game is that it’s a perfect market economy. Property rights in chips are fully allocated, everyone walks in with a similar initial endowment of brains and chips, and there are mutual benefits to trade, even when wealth is distributed unequally. Yet the libertarian ideals are completely undone when the unequal allocation of wealth spills over to become an unequal allocation of power, where votes are weighted by money. That creates a reinforcing feedback: 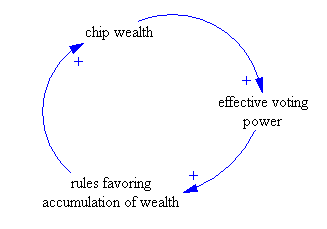 Allocating votes in a zoning protest in proportion to acreage, or any other policy that matches power to wealth, has the same properties as the Starpower game, and will lead to the same ugly outcome if left unchecked. As Donella Meadows put it,

The wise Squares whom we call Founding Fathers, who set up the rules of our national game, knew that. They invented ingenious devices for giving everyone a chance to win — democratic elections, universal education, and a Bill of Rights. Out of their structure have come further methods for interrupting accumulations of power — anti-trust regulations, progressive taxation, inheritance restrictions, affirmative action programs.

All of which, you might note, have been weakened over the past decade or so. We have moved a long way toward a Starpower structure. One one the worst steps in that direction was the evolution of expensive, television-mediated election campaigns, which permit only Squares to run for office. That puts Squares increasingly in control of the rules, and they make rules to benefit Squares.

Is that the game we want to be playing?

2 thoughts on “The rabble in the streets, calling for more power to the monarchy”