An asteroid has been discovered sharing earth’s orbit, with a horseshoe-shaped orbit (from an earthbound reference frame). 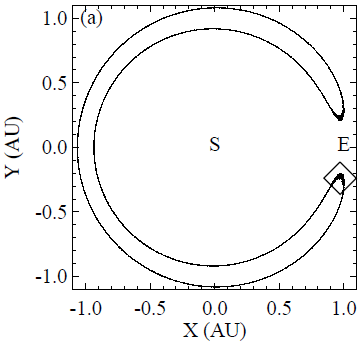 The arXiv blog has a nice summary:

Near-Earth asteroids are common but SO16 is in a category of its own. First and foremost, it has an exotic horseshoe-shaped orbit (see diagram above) which astronomers believe to be very rare.

Its worth taking a few moments to think about horseshoe orbits. Two points are worth bearing in mind. First, objects further from the Sun than Earth, orbit more slowly. Second, objects that are closer to the Sun orbit more quickly than Earth.

So imagine an asteroid with an orbit around the Sun that is just a little bit smaller than Earth’s. Because it is orbiting more quickly, this asteroid will gradually catch up with Earth.

When it approaches Earth, the larger planet’s gravity will tend to pull the asteroid towards it and away from the Sun. This makes the asteroid orbit more slowly and if the asteroid ends up in a orbit that is slightly bigger than Earth’s, it will orbit the Sun more slowly than Earth and fall behind.

After that, the Earth will catch up with the slower asteroid in the bigger orbit, pulling it back into the small faster orbit and process begins again.

Even simple systems like the three-body problem can yield analytically intractable and surprising solutions, but this is the weirdest I’ve yet seen (and the competition is stiff this week). It even inspires poetry in the comments.