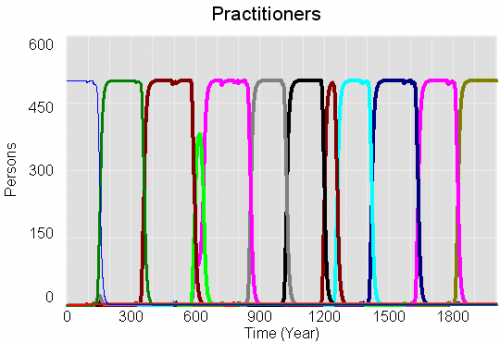 A few manual changes were  made to the model, following the dyn2ven translation:

Manual edits of possible significance are tagged with a !! (double exclamation point) in the comment field, so that they’re easy to find in the text listing.

Two further improvements would be much appreciated by future users, spreading your fame around the modeling world:

If you do create an upgraded version, add your name to the About screen and send me a copy so I can update this post. To avoid duplication of effort, you might let others know what you’re up to in the comments below.

You can find the original DYNAMO code and article here.

7 thoughts on “Path Dependence, Competition, and Succession in the Dynamics of Scientific Revolution”