Back in 2002, when invasion of Iraq was on the table and many Democrats were rushing patriotically to the President’s side rather than thinking for themselves, William Nordhaus (staunchest critic of Limits) went out on a limb a bit to attempt a realistic estimate of the potential cost.

All the dangers that lead to ignoring or underestimating the costs of war can be reduced by a thoughtful public discussion. Yet neither the Bush administration nor the Congress – neither the proponents nor the critics of war – has presented a serious estimate of the costs of a war in Iraq. Neither citizens nor policymakers are able to make informed judgments about the realistic costs and benefits of a potential conflict when no estimate is given.

His worst case: about $755 billion direct (military, peacekeeping and reconstruction) plus indirect effects totaling almost $2 trillion for a decade of conflict and its aftermath. 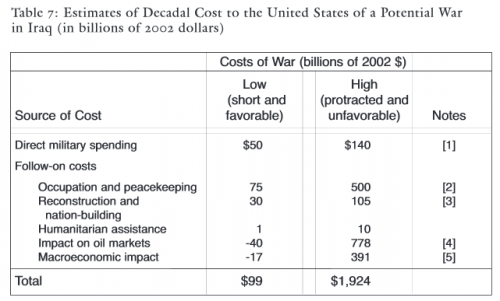 Nordhaus’ worst case is pretty close to actual direct spending in Iraq to date. But with another trillion for Afghanistan and 2 to 4 in the pipeline from future obligations related to the war, the grand total is looking like a lowball estimate. Other pre-invasion estimates, in the low billions, look downright ludicrous.

Particularly worrisome are the casual promises of postwar democratization, reconstruction, and nation-building in Iraq. The cost of war may turn out to be low, but the cost of a successful peace looks very steep. If American taxpayers decline to pay the bills for ensuring the long-term health of Iraq, America would leave behind mountains of rubble and mobs of angry people. As the world learned from the Carthaginian peace that settled World War I, the cost of a botched peace may be even higher than the price of a bloody war