When I see $21.85 per square foot for anything associated with a house, “cheap” is not what comes to mind. That’s in the territory for luxury interior surfaces, not bulk materials like roofing. I’m reminded of the old saw in energy economics (I think from the EMF meetings in Aspen) that above 7000 feet, the concept of discount rates evaporates.

So, what are the numbers, really?

The source for all the excitement is frequently this Consumer Reports article – really an offhand blog post. A follow up does the math again using Tesla’s own calculator. None of these sources has any concept of discounting or opportunity costs.

What if you do believe in time value of money? There are lots of complexities, like how you finance a $65,500 capital outlay, but let’s set that aside and consider a cash purchase of a new roof, with the savings expected to generate a reasonable return.

Then there are four issues:

Let’s do my mom’s house in California (an advantageous location for solar). Tesla calculates: 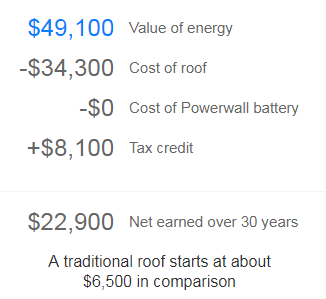 So, the Tesla roof has a $29,400 advantage over a regular roof. However, the value of energy here is undiscounted – it’s a simple accumulation of $136/month over 30 years*12 months.

Here’s the discounted version, with my assumptions above: 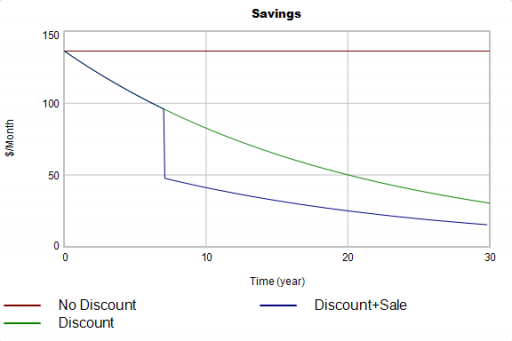 Discounted value of the flow of avoided energy costs over time.

Present value of avoided costs cumulated over 30 years. Note that, with discounting, life extension beyond 30 years doesn’t have much impact, because the discounted contribution at 30 years is already small.

The bottom line is that if you expect an ROI, the present value of the stream of avoided electricity costs is about half as big ($25,400), or a third as big ($17,600) if you sell your house and buyers aren’t sophisticated. That makes the bottom line, net of a conventional roof, somewhere between $5700 and -1800. Note that any advantage is entirely contingent on the Federal tax credit.

Should you get one?

Sure. If you need a roof, and have the capital, it looks like a darn nice option, with some distinct benefits beyond the power generated. You’d certainly be doing the global carbon cycle a favor, particularly if you’d otherwise spend the $ on air travel. Pocket your tax credits and rejoice in a small victory over the system. But then write to your representatives and ask them for a big fat carbon tax. That will really motivate a low-carbon economy, and increase the value of your roof!