Research shows that some forests in the Rockies aren’t recovering from wildfires.

Evidence for declining forest resilience to wildfires under climate change

Abstract
Forest resilience to climate change is a global concern given the potential effects of increased disturbance activity, warming temperatures and increased moisture stress on plants. We used a multi‐regional dataset of 1485 sites across 52 wildfires from the US Rocky Mountains to ask if and how changing climate over the last several decades impacted post‐fire tree regeneration, a key indicator of forest resilience. Results highlight significant decreases in tree regeneration in the 21st century. Annual moisture deficits were significantly greater from 2000 to 2015 as compared to 1985–1999, suggesting increasingly unfavourable post‐fire growing conditions, corresponding to significantly lower seedling densities and increased regeneration failure. Dry forests that already occur at the edge of their climatic tolerance are most prone to conversion to non‐forests after wildfires. Major climate‐induced reduction in forest density and extent has important consequences for a myriad of ecosystem services now and in the future.

I think this is a simple example of a tipping point in action.

Using an example from Hirota et al., in my toy model article above, here’s what happens: 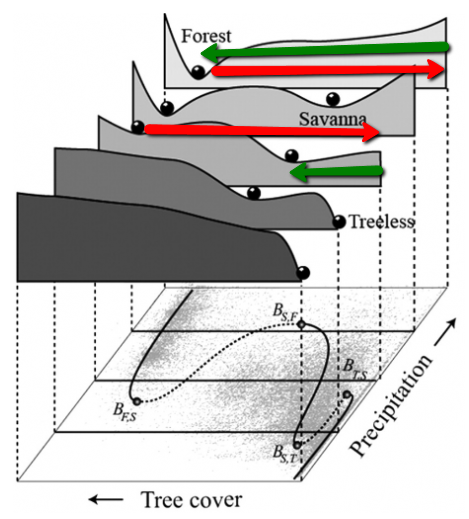 At high precipitation, a fire (red arrow, top) takes the forest down to zero tree cover, but regrowth (green arrow, top) restores the forest. At lower precipitation, due to climate change, the forest remains stable, until fire destroys it (lower red arrow). Then regrowth can’t get past the newly-stable savanna state (lower green arrow). No amount of waiting will take the trees from 30% cover to the original 90% tree cover. (The driving forces might be more complex than precipitation and fire; things like insects, temperature, snowpack and evaporation also matter.)

The insidious thing about this is that you can’t tell that the forest state has become destabilized until the tipping event happens. That means the complexity of the system defeats any simple heuristic for managing the trees. The existence of healthy, full tree cover doesn’t imply that they’ll grow back to the same state after a catastrophe or clearcut.