Using social media is a bit like dining out these days. You get some tasty gratification and social interaction, but you might catch something nasty, or worse, pass it along. I use Facebook and Twitter to get the word out on my work, and I learn interesting things, but these media are also the source of 90% of my exposure to fake news, filter bubbles, FOMO, AI bias, polarization, and rank stupidity.

If my goal is to make the world a better place by sharing insights about systems, is social media a net positive? Are there particular ways to engage that could make it a win? Since we can’t turn off the system, how do we coax it into working better for us? This causal loop diagram represents my preliminary thinking about some of the issues. 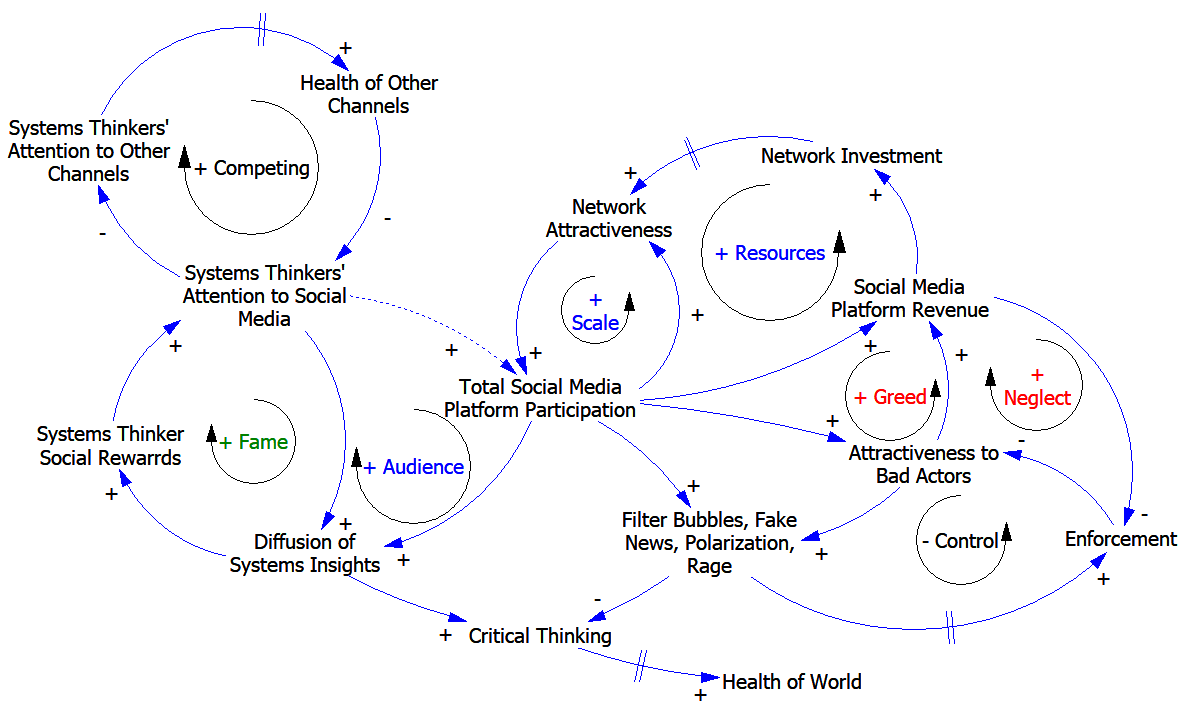 I think there are three key points.

First, social media is not really different from offline movements, or the internet as a whole. It’s just one manifestation. Like others, it is naturally primed to grow, due to positive feedback. Networks confer benefits to members that increase with scale, and networks reinvest in things that make the network more attractive. This is benign and universal (at least until the network uses AI to weaponize users’ information against them). These loops are shown in blue.

Second, there are good reasons to participate. By sharing good content, I can assist the diffusion of knowledge about systems, which helps people to manage the world. In addition, I get personal rewards for doing so, which increases my ability to do more of the same in the future. (Green loop.) There are probably also some rewards to the broader systems thinking community from enhanced ability to share information and act coherently.

But the dark side is that the social media ecosystem is an excellent growth medium for bad ideas and bad people who profit from them. Social platforms have no direct interest in controlling this, because they make as much money from an ad placed by Russian bots as they do from a Nike ad. Worse, they may actively oppose measures to control information pollution by capturing regulators and legislators. (Red loops.)

So far, I’m finding that the structure of the problem – a nest of good and evil positive feedback loops – makes it very hard to decide which effects will win out. Are we getting leverage from a system that helps share good ideas, or merely feeding a monster that will ultimately devour us? The obvious way to find out is to develop a more formal model, but that’s a rather time consuming endeavor. So, what do you think? Retire from the fray? Find a better outlet? Put the technology to good use? Where’s the good work in this area?