It may take a while for the full story to be understood, but renewables are far from the sole problem in the Texas power outages.

In Texas, the power is out when it’s most needed, and a flurry of finger pointing is following the actual flurries. The politicians seem to have seized on frozen wind turbines as the most photogenic scapegoat, but that’s far from the whole story. It’ll probably take time for the full story to come into focus, but here’s some data: 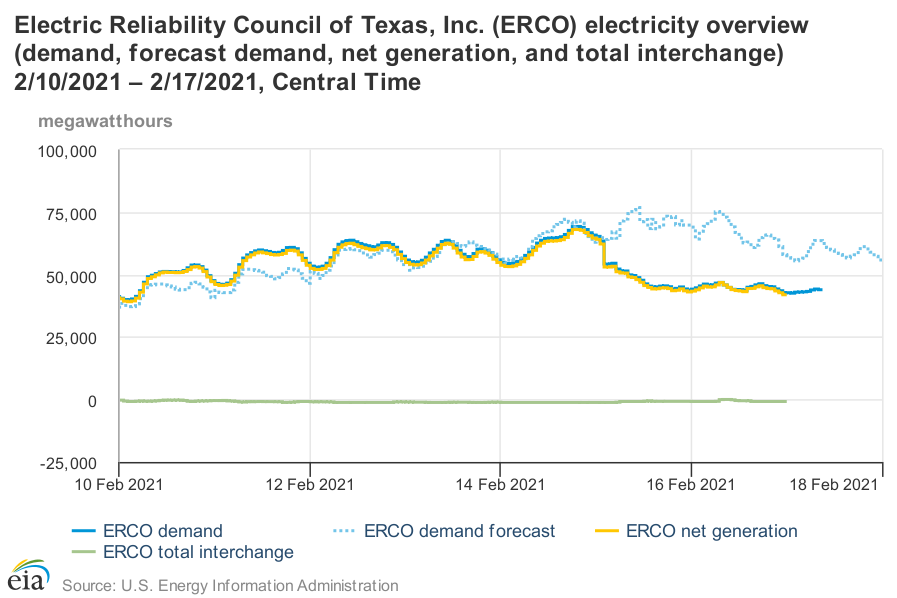 Problems really start around midnight on the 15th/16th, and demand remains depressed as of now. 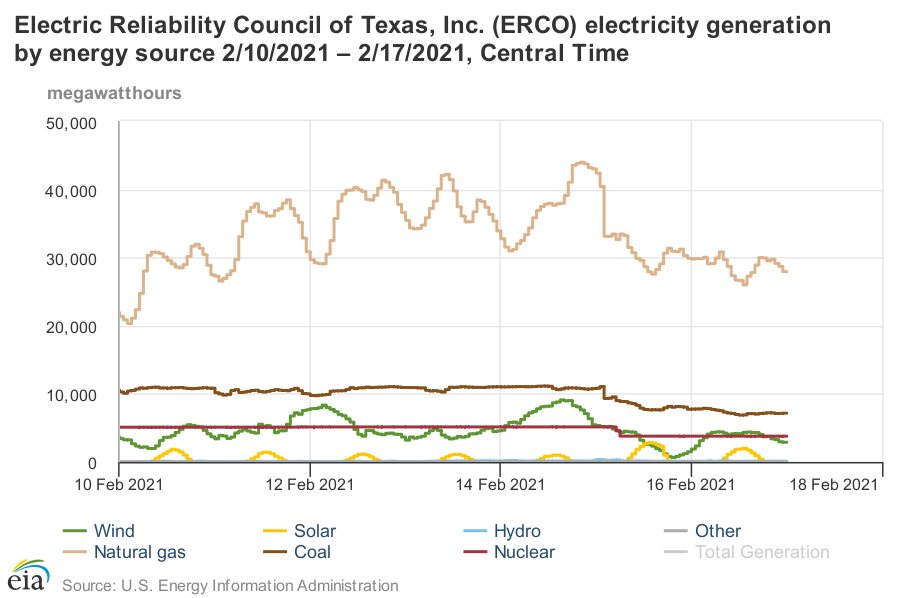 Wind output began dropping the night of the 15th, and gradually fell from a peak of 9GW to about 1GW the next day, before rebounding to a steadier 3-4GW recently. But that’s not the big hit. Gas generation fell 7GW in one hour from 2-3am on the 16th. In total, it dropped from a peak of 44GW to under 28GW. Around the same time, about 3GW of coal went down, along with South Texas Project unit 1, a nuclear plant, taking 1.3GW in one whack. In total, the thermal power losses are much bigger than renewables, even if they went to 0.

The politicians, spearheaded by Gov. Abbott, are launching a witch hunt against the system operator ERCOT. I suspect that they’ll find the problem at their own doorstep.

Some, like Jesse Jenkins, think we have to wait to get the “complete picture” to figure out who is to blame. Jenkins is an associate professor with Princeton University’s Center for Energy & Environment.
“Across the board, from the system operators, to the network operators to the power plant owners, and architects and builders that build their buildings, they all made the decision not to weatherize for this kind of event, and that’s coming back to, to bite us in the end,” Jenkins said.

You can get a better perspective by looking at the data over longer horizons: 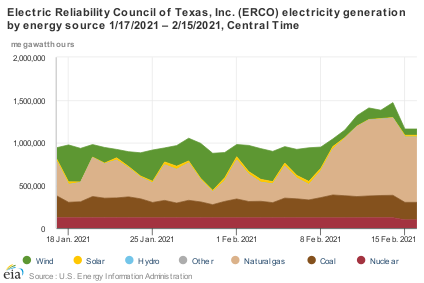 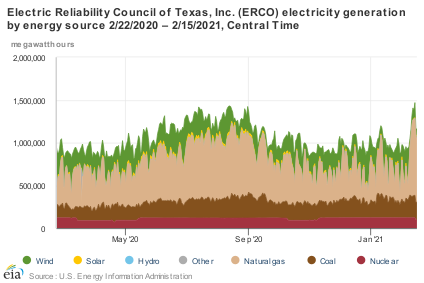 In the context of a year, you can see how big the demand spike has been. This winter peak exceeds the normal summer peak. You can also see that wind is always volatile – expect the unexpected. Normally, gas, and to some extent, coal plants, are cycling to fill the gaps in the wind.

If you look at ERCOT’s winter risk assessment, they’re pretty close on many things. Their extreme load scenario is 67.2GW. The actual peak hour in the EIA data above is 69.2GW. Low wind was predicted at 1.8GW; reality was less than half that.

ERCOT’s low wind forecast is roughly the level that prevailed for one day in 2020, which is about 2.7 standard deviations out, or about 99.7% reliability. That’s roughly consistent with what Gov. Abbott expressed, that no one should have to go without power for more than a day. Actual wind output was worse than expected, but not by a large margin, so that’s not the story.

On the other hand, thermal power forced outages have been much larger than expected. In the table above, forced outages are expected to be about 10GW at the 95% level. This is a puzzling choice, because it’s inconsistent with the apparent wind reliability level. If you’re targeting one bad day over December/January/February, you should be planning for the 99% outage rate. In that case, the plan should have targeted >12GW of forced outages. But that’s still not the whole story – the real losses were bigger, maybe 5 standard deviations, not 3 or 2.

I think the real problem may be failure to anticipate the covariance of extremes. In Texas, there have been correlated failures of power plants due to shared natural gas infrastructure and shared design features like outdoor turbines.

Similarly, while wind speeds are positively correlated with winter heat load, it’s still a noisy process, and the same kind of conditions that bring extreme cold can stall wind speeds. This isn’t just random, it’s expected, and familiar because it happened in the 2018 Polar Vortex.

In any domain, a risk plan that treats correlated events as independent is prone to failure. This was the killer in the runup to the 2008 financial crisis: rating agencies treated securitized mortgages like packages of independent assets, failing to anticipate correlated returns across the entire real estate asset class. Coupling is one of the key features of industrial catastrophes described in Perrow’s Normal Accidents.

Rating agencies were clearly motivated by greed. ERCOT’s motivations are not clear to me, but ultimately, the Texas legislature decides the operating rules for ERCOT. If the rules favor cheap power and limit ERCOT’s ability to fund reliability investments, then you get a system that isn’t robust to extreme events like this.

1 thought on “The Lies are Bigger in Texas”