The DEQ dead parrot skit continues in the Revised Evans EA, which borrows boilerplate from the Morgan EA I reported on yesterday. It once again cites the spurious Rygg study, overgeneralizes its findings, and repeats the unsubstantiated Fairbanks claims. At least in the Morgan EA, DEQ reviewed some alternative evidence cited by Orville Bach, indicating that gravel pit effects on property values are nonzero. In the Evans EA, DEQ omits any review of evidence contradicting Rygg; evidently DEQ’s institutional memory lasts less than 3 months.

Even the review in the Morgan EA was less than coherent. After discussing Rygg, they summarize Bach’s findings and two key articles:

He includes a figure from one of the citations showing the impact on residential property values based on distance of the property from the gravel mine – the closer the property, the greater the impact. Based on this figure, properties less than a quarter mile from the mine experienced up to a 32% decline in value. The impact on property value declined with increased distance from the gravel mine. Properties three miles away (the farthest distance in the analysis) experienced a 5% decline. …

Researchers have used the hedonic estimation method to evaluate impacts to housing prices from environmental “disamenities” (factors considered undesirable). Using this multivariate statistical approach, many characteristics of a purchased good (house) are regressed on the observed price, and thus, one can extract the relative contribution of the environmental variables to the price of the house (Boyle and Kiel 2001). Research has been conducted in many locations in the country, and on many types of disamenities (landfills, power plants, substations, hazardous waste sites, gravel mines, etc.). The study cited by Mr. Bach (Erickcek 2006) uses techniques and data developed by Dr. Hite to evaluate potential effects on property values of a proposed gravel mine in Richland Township, Michigan. Dr. Hite’s study evaluated effects of a gravel mine in Ohio. Both the Erickcek and Hite studies showed decreases in property values resulting from proximity of the property to the mine (Erickcek 2006).

DEQ latches onto one footnote in Erickcek,

However, Erickcek states in footnote 6, ‘Only those owning property at the time of the establishment of the gravel mine would experience a loss in equity. Those purchasing property near an established mine would not experience an equity loss because any negative effects from the mine’s operation would have been incorporated into the purchase price.’

Note that this is a statement about property rights and the distribution of harm. It doesn’t in anyway diminish the existence of harm to someone in society. Evidently DEQ doesn’t understand this distinction, or thinks that Rygg trumps Hite/Erickcek, because it concludes:

That’s Hite 9, Rygg 1. Rygg’s point is scored on location, which goes to applicability of the results to Montana. This is a hollow victory, because Rygg himself acknowledges in his report that his results are not generalizable, because they rely on the unique circumstances of the single small pit under study (particularly its expected temporary operation). DEQ fails to note this in the Evans and Morgan EAs. It’s hard to judge generalizability of the Hite study, because I don’t know anything about local conditions in Ohio. However, it is corroborated by a Rivers Unlimeted hedonic estimate with a different sample.

A simple combination of Rygg and Hite measurements would weight the two (inversely) by their respective variances. A linear regression of the attributes in Rygg indicates that gravel pits contribute positively to value (ha ha) but with a mean effect of $9,000 +/- $16,000. That, and the fact that the comparable properties have much lower variance than subject properties adjacent to the pit should put up red flags immediately, but we’ll go with it. There’s no way to relate Rygg’s result to distance from the pit, because it’s not coded in the data, but let’s assume half a mile. In that case, the roughly comparable effect in Hite is about -$74,000 +/- $11,000. Since the near-pit price means are similar in Hite and Rygg, and the Rygg variance is more than twice as large, we could combine these to yield a meta measurement of about 2/3 Hite + 1/3 Rygg, for a loss of $46,000 per property within half a mile of a pit (more than 30% of value). That would be more than fair to Rygg, because we haven’t accounted for the overwhelming probability of systematic error due to selection bias, and we’re ignoring all the other literature on valuation of similar nuisances. This is all a bit notional, but makes it clear that it’s an awfully long way from any sensible assessment of Rygg vs. Hite to DEQ’s finding of “no effect.”

Lost socks are a perpetual problem around here. A few years back, the kids would come to me for help, and I’d reflexively ask, “well, did you actually go into your room and look in the sock drawer?” Too often, he answer was “uh, no,” and I’d find myself explaining that it wasn’t very meaningful to not find something when you haven’t looked properly. Fortunately those days are over at our house. Unfortunately, Montana’s Department of Environmental Quality (DEQ) insists on reliving them every time someone applies for a gravel mining permit.

Montana’s constitution guarantees the right to a clean and healthful environment, with language that was the strongest of its kind in the nation at the time it was written. [*] Therefore you’d think that DEQ would be an effective watchdog, but the Opencut Mining Program’s motto seems to be “see no evil.” In a number of Environmental Assessments of gravel mining applications, DEQ cites the Rygg Study (resist the pun) to defend the notion – absurd on its face – that gravel pits have no impact on adjacent property values.Â  For example:

Several years ago, DEQ contracted a study to determine “whether the existence of a gravel pit and gravel operation impacts the value of surrounding real property.” The study (Rygg, February 1998) involved some residential property near two gravel operations in the Flathead Valley. Rygg concluded that the above-described mitigating measures were effective in preventing decrease in taxable value of those lands surrounding the gravel pits.

The study didn’t even evaluate mitigating measures, but that’s the least of what’s wrong (read on). Whenever Rygg comes up,the “Fairbanks review” is not far behind. It’s presented like a formal peer review, but the title actually just means, “some dude at the DOR named Fairbanks read this, liked it, and added his own unsubstantiated platitudes to the mix.” The substance of the review is one paragraph:

First, we have no citations to back up these anecdotes. They could simply mean that the Department of Revenue arbitrarily denies requests for tax relief on these bases, because it can. Second, the boiled frog syndrome variant, that new purchasers happily accept what distresses long-term residents, is utterly unfounded. The DEQ even adds its own speculation:

The proposed Keller mine and crushing facility and other operations in the area … create the possibility of reducing the attractiveness of home sites to potential homebuyers seeking a quiet, rural/residential type of living environment. These operations could also affect the marketability of existing homes, and therefore cause a reduction in the number of interested buyers and may reduce the number of offers on properties for sale. This reduction in property turnover could lead to a loss in realtors’ fees, but should not have any long-term effect on taxable value of property. …

When GOMAG (a local action group responding to an explosion of gravel mining applications) pointed me to these citations, I took a look at the Rygg Study. At the time, I was working on the RLI, and well versed in property valuation methods. What I found was not pretty. I’m sure the study was executed with the best of intentions, but it uses methods that are better suited to issuing a loan in a bubble runup than to measuring anything of import. In my review I found the following:

’¢ The Rygg study contains multiple technical problems that preclude its use as a valid measurement of property value effects, including:

o The method of selection of comparable properties is not documented and is subject to selection bias, exacerbated by the small sample
o The study neglects adverse economic impacts from land that remains undeveloped
o The measure of value used by the study, price per square foot, is incomplete and yields results that are contradicted by absolute prices
o Valuation adjustments are not fully documented and appear to be ad hoc
o The study does not use accepted statistical methods or make any reference to the uncertainty in conclusions
o Prices are not adjusted for broad market appreciation or inflation, though it spans considerable time
o The study does not properly account for the history of operation of the pit

I submitted my findings to DEQ in a long memo, during the public comment period on two gravel applications. You’d think that, in a rational world, it would provoke one of two reactions: “oops, we’d better quit citing that rubbish” or, “the review is incorrect, and Rygg is actually valid, for the following technical reasons ….”Â  Instead, DEQ writes,

The Rygg report is not outdated. It is factual data. The Diane Hite 2006 report upon which several of the other studies were based, used 10 year old data from the mid-1990’s. Many things, often temporary, affect property sale prices.

Huh? They’ve neatly tackled a strawdog (“outdated”) while sidestepping all of the substantive issues. What exactly does “factual data” mean anyway? It seems that DEQ is even confused about the difference between data and analysis. Nevertheless, they are happy to proceed with a recitation of Rygg and Fairbanks, in support of a finding of no “irreversible or irretrievable commitments of resources related to the area’s social and economic circumstances.”

So much for the watchdog. Where DEQ ought to be defending citizens’ constitutional rights, it seems bent on sticking its head in the sand. Its attempts to refute the common sense idea, that no one wants to live next to a gravel pit, with not-even-statistical sleight of hand grow more grotesque with each EA. I find this behavior baffling. DEQ is always quick to point out that they don’t have statutory authority to consider property values when reviewing applications, so why can’t they at least conduct an honest discussion of economic impacts? Do they feel honor-bound to defend a study they’ve cited for a decade? Are they afraid the legislature will cut off their head if they stick their neck out? Are they just chicken?

I noticed a few news items on the SO2 allowance market today, following up on the latest auction. Here’s the auction history: 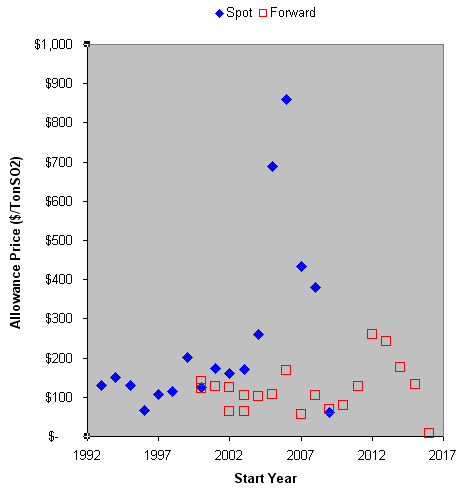 The spot permit price has collapsed, from a high of $860/ton in the 2006 compliance stampede, to $62. That’s not surprising, given the economic situation. What is a little surprising is that the forward price (allowances for use starting in seven years) fell to $6.63 – a tenth of the previous low, spot or forward. What’s going on there? Do plants expect a seven-year recession? Are utilities hoarding cash? Do they expect the whole market to unravel, or to become irrelevant as climate policy imposes a more tightly-binding constraint?