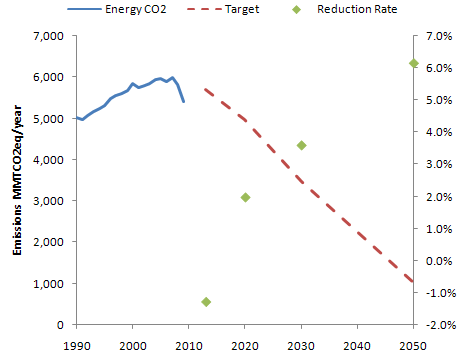 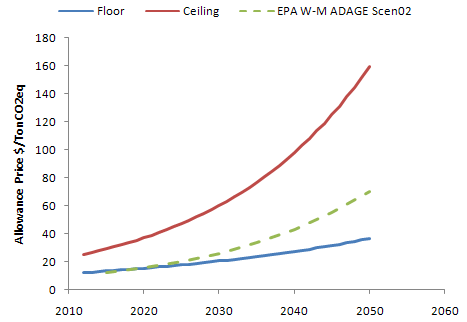 AP has the story. The House Committee on Energy and Commerce has the draft. From the summary:

The legislation has four titles: (1) a ‘clean energy’ title that promotes renewable sources of energy and carbon capture and sequestration technologies, low-carbon transportation fuels, clean electric vehicles, and the smart grid and electricity transmission; (2) an ‘energy efficiency’ title that increases energy efficiency across all sectors of the economy, including buildings, appliances, transportation, and industry; (3) a ‘global warming’ title that places limits on the emissions of heat-trapping pollutants; and (4) a ‘transitioning’ title that protects U.S. consumers and industry and promotes green jobs during the transition to a clean energy economy.

One key issue that the discussion draft does not address is how to allocate the tradable emission allowances that restrict the amount of global warming pollution emitted by electric utilities, oil companies, and other sources. This issue will be addressed through discussions among Committee members.

A few quick observations, drawing on the committee summary (the full text is 648 pages and I don’t have the appetite): END_OF_DOCUMENT_TOKEN_TO_BE_REPLACED

I just ran across a May 2008 GAO report, detailing the findings of a panel of economists convened to consider US climate policy. The panel used a modified Delphi method, which can be good or evil. The eighteen panelists are fairly neoclassical, with the exception of Richard Howarth, who speaks the language but doesn’t drink the Kool-aid.

First, it’s interesting what the panelists agree on. All of the panelists supported establishing a price on greenhouse gas emissions, and a majority were fairly certain that there would be a net benefit from doing so. A majority also favored immediate action, regardless of the participation of other countries. The favored immediate action is rather fainthearted, though. One-third favored an initial price range under $10/tonCO2, and only three favored exceeding $20/tonCO. One panelist specified a safety valve price at 55 cents. Maybe the low prices are intended to rise rapidly (or at the interest rate, per Hotelling); otherwise I have a hard time seeing why one would bother with the whole endeavor. It’s quite interesting that panelists generally accept unilateral action, which by itself wouldn’t solve the climate problem. Clearly they are counting on setting an example, with imitation bringing more emissions under control, and perhaps also on first-mover advantages in innovation.