With oil back at $70, I got curious how Hotelling is holding up. The observation that resource prices ought to rise at the interest rate is looking almost plausible now, if you squint, whereas it looked rather foolish for most of the 80s and 90s. Of course, the actual production trajectory has nothing to do with Hotelling’s simple model, which produces a monotonic decline. The basic problem with Hotelling, as I see it, is that there’s a difference between equilibrium and expectations subject to uncertainty. Moreover the extraction trajectory is largely controlled by the rate at which governments lease or otherwise exploit resources, and governments have more than the usual dose of bounded rationality. (I got interested in this because I’ve been investigating Montana’s management of mineral rights on its school trust lands. So far, the state’s exercise of its fiduciary responsibility looks suspiciously like a corporate welfare program. More on that another time.) 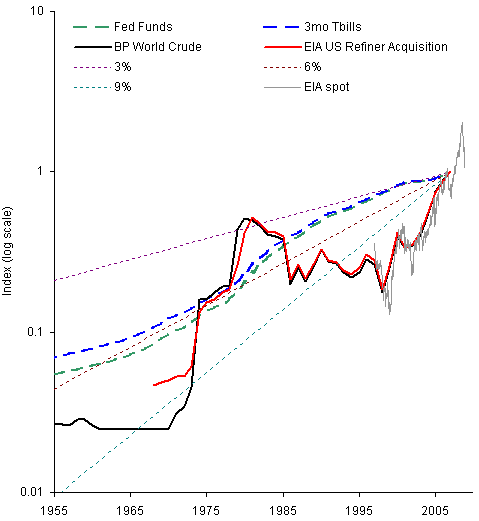 The figure compares the nominal oil price trajectory to actual risk-free rates (3month T-bills and the federal funds rate), as well as three constant rates for good measure. At those rates, one would have to conclude that a large risk premium must apply to oil production, or that there’s been an awful lot of uneconomic production over the years (for example, everything from about 1986 to 2006), or that current prices are just a blip and will continue to revert to some more moderate long-term level.