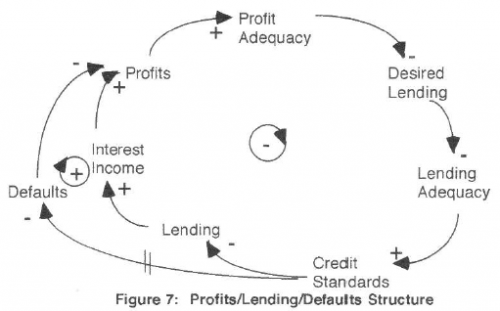 lf there are two or more GBEs in a single market, they may compete against each other for a larger share of loan purchases. Among the ways a GBE may compete tor loans is by trying to become a more attractive partner lo originators. Being more attractive may translate into accepting loans of lower credit standards – or accepting less rigorously documented loans, which in practice probably means lower credit standards, too. It should be clear that something analogous to an arms race may result. Each GBE may continually try tor an advantage that is continually wiped out by the response of the other GBE. The result of this process may be steadily declining credit standards of GBEs. 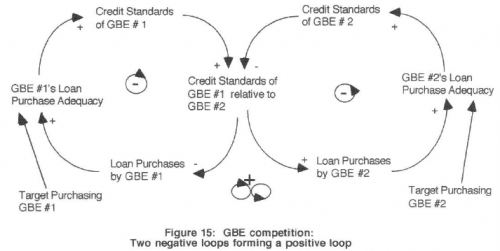 Extrapolative expectations and the closely related positive loop involved in speculative bubbles have been discussed by social scientists for at least a century and a half. The basic idea is that if potential buyers interpret a price rise as part of a continuing trend, they may be drawn into the market by their expectation of continuing price rises,2e thereby swelling demand and causing prices to continue rising.

In the consumer sector, a potential buyer may believe that prices will be higher in the future, if prices have been rising recently. Hence, he will believe that he will pay more if he waits and that he might make money if he buys now. Further if the buyer must finance his purchase he will be comforted by a belief that he can sell the asset to pay off the loan if some misfortune befalls him. These considerations increase an individuals willingness to buy now. A greater willingness to buy, spread over the whole population, will mean an increase in demand and thus a continued increase in prices.

In the financing sectors, a perception that prices will continue to trend upwards makes managers of financial institutions more comfortable with lower credit standards. They feel more certain that they can get their money out, if the lender defaults. Further. because loans do not default immediately when made, financial managers may tend to evaluate standards — particularly standards involving the value of collateral – in terms of the future. For example, the loan-to-value ratio on a loan might not meet the target now, but, if prices continue to rise, the ratio might be better than target at, say, three years in the future. As a consequence, the currently acceptable loan to value ratio might be pegged higher than the target standard. (Note: a higher loan-to-value ratio is less credit worthy). People will find that they can get the financing they previously were denied. Demand will increase and prices will continue to rise. 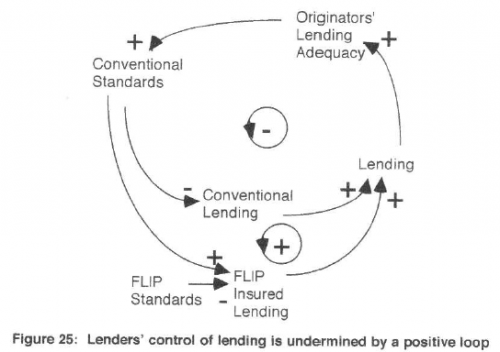 What I find particularly interesting about this work is the richness provided by the detailed knowledge of the industry that was embodied in the model. The press is full of talk about bubbly expectations and moral hazard these days, but generally short on explanation of the mechanisms. This report really gets into an operational description of the (potentially perverse) ways lenders, consumers, regulators, the Fed, and guarantee programs interact. That sheds light on many behaviors that are not widely recognized, shows why piecemeal solutions will fail, and identifies systemic solutions that will work.

There are some additional chapters to the report that I’ll comment on in a future installment. Further information on the modeling is available from the authors on request.

Apologies for any typos I missed – the report excerpts are from a scan. Thanks to Jim Thompson for providing the material.