The systems story on Lake Mead deepens (unlike the lake itself). I heard about some more interesting dynamics in a side conversation at the Balaton Group meeting in Iceland.

First, it’s not just Mead that’s impacted; upstream Lake Powell is also low. One consequence of this is that hydro generation is down, because the head is lower. Since both lakes are half full, it might make sense to drain Powell into Mead. That would raise the head at Mead, making up for the loss of generation at Powell. Water losses would also decrease. One possible obstacle to this strategy is that stakeholders in Powell fear that it could never be refilled, because endangered species would reinhabit the empty canyons.

Second, as the lakes get lower, bad things happen. Evidently the deep waters are stratified, and there are plumes of nasty saline gunk near the bottom. If lake levels continue to drop, there’s a possibility of serious water quality problems to go with the quantity issues.

One thing that’s striking about the media coverage of data and projections by agencies is that there’s little discussion of the nature or magnitude of variability. The implicit assumption behind current behavior is that droughts are cyclical or just noise. The hope seems to be that, since we’re in a low period for basin rainfall, the magic of reversion to the mean will soon bring forth the waters again. I don’t think there’s any good reason to act as if that will really happen, especially if climate makes the distribution nonstationary. Modelers seem to think that the Southwest will move to a drought regime as the earth warms, but what if they’re wrong, and the hydrologic cycle accelerates? Glen Canyon Dam was nearly lost in 1983, so a healthy increase in rainfall wouldn’t necessarily be a blessing either. 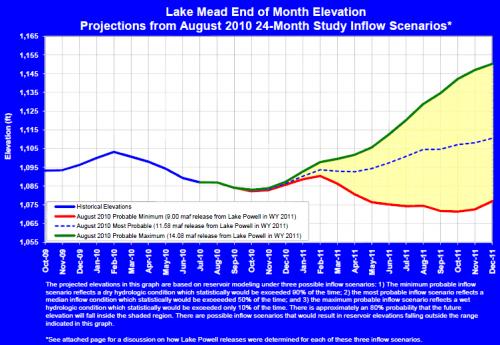 Current Bureau of Reclamation projections for Lake Mead elevation. Documentation is pretty opaque, but it looks like the projections are based on quantiles of historic inflows, i.e. they neglect autocorrelation or changes in the distribution of supply.

Edward Abbey must be smiling at least a little at this mess.