I find panic-fueled iodine marketing and disingenuous comparisons of Fukushima to Chernobyl deplorable.

Telephone briefing from Sir John Beddington, the UK’s chief scientific adviser, and Hilary Walker, deputy director for emergency preparedness at the Department of Health.“Unequivocally, Tokyo will not be affected by the radiation fallout of explosions that have occurred or may occur at the Fukushima nuclear power stations.”

Surely the prospect of large scale radiation release is very low, but it’s not approximately zero, which is my interpretation of “unequivocally not.”

On my list of the seven deadly sins of complex systems management, number four is,

Certainty. Planning for it leads to fragile strategies. If you can’t imagine a way you could be wrong, you’re probably a fanatic.

Nuclear engineers disagree, but some seem to have a near-fanatic faith in plant safety. Normal Accidents documents some bizarrely cheerful post-accident reflections on safety. I found another when reading up over the last few days: 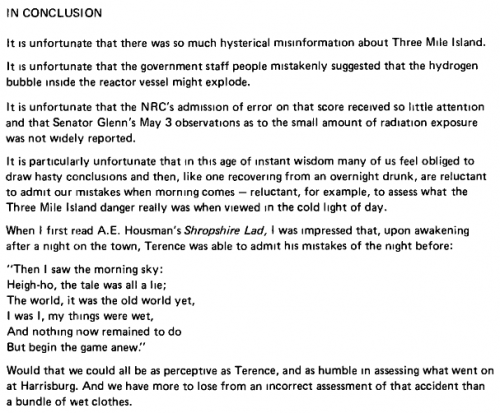 Admittedly the author, GR Corey, writing in the IAEA Bulletin, is a Comm Ed manager, not a scientist, but this is really over the top.

This summary (originally here; now replaced by a link to MIT Nuclear Science & Engineering’s ongoing assessment) of the accident has been widely circulated on the web. In the internet telephone game, it acquires tag lines like japan-reactors-pose-no-risk. Still, I thought it was good enough to share with a number of people at one point. An excerpt:

The plant came close to a core meltdown. Here is the worst-case scenario that was avoided: If the seawater could not have been used for treatment, the operators would have continued to vent the water steam to avoid pressure buildup. The third containment would then have been completely sealed to allow the core meltdown to happen without releasing radioactive material. After the meltdown, there would have been a waiting period for the intermediate radioactive materials to decay inside the reactor, and all radioactive particles to settle on a surface inside the containment. The cooling system would have been restored eventually, and the molten core cooled to a manageable temperature. The containment would have been cleaned up on the inside. Then a messy job of removing the molten core from the containment would have begun, packing the (now solid again) fuel bit by bit into transportation containers to be shipped to processing plants. Depending on the damage, the block of the plant would then either be repaired or dismantled.

I still think it’s a pretty good assessment of the situation. However, it’s also at least a bit optimistic. The worst case described is for a reactor in containment. It turns out that there’s also fuel outside of containment in reactor 4, which poses a danger of significant radiation release if it catches fire. Hopefully the probability is low, but I haven’t seen anything to convince me that it’s as low as “unequivocally not”. Also, reactor 1 apparently doesn’t have a “core catcher.”

…Events kept developing, and many people keep sharing their discovery with me that one is always smarter after the fact.

In my email, preserved through various copies of Jason’s first post around the internet, I expressed my strong believe that my family and friends are safe. This keeps both annoying and reassuring a great many people. Whether my unwavering trust in my fellow engineers of 50 years ago who designed and build the plant, or my complete trust and admiration of my fellow engineers who are currently operating the reactors makes me a level-headed guy or right-out stupid is also hotly debated. Most people hope for the former, but some opt for the latter.

I find this willingness to consider the possibility of being wrong refreshingly non-fanatical.

At the end of the day, it hardly matters what we armchair analysts think the risks are, because we have no control over the evolution of the accident. What does matter, from a policy perspective, is what this accident says – if anything – about the safety implications of wider deployment of nuclear power as part of an energy and climate solution.