… on another incoherent Breakthrough editorial:

The Creative Destruction of Climate Economics

In the 70 years that have passed since Joseph Schumpeter coined the term “creative destruction,” economists have struggled awkwardly with how to think about growth and innovation. Born of the low-growth agricultural economies of 18th Century Europe, the dismal science to this day remains focused on the question of how to most efficiently distribute scarce resources, not on how to create new ones — this despite two centuries of rapid economic growth driven by disruptive technologies, from the steam engine to electricity to the Internet.

Perhaps the authors should consult the two million references on Google scholar to endogenous growth and endogenous technology, or read some Marx.

There are some important, if qualified, exceptions. Sixty years ago, Nobelist Robert Solow and colleagues calculated that more than 80 percent of long-term growth derives from technological change. But neither Solow nor most other economists offered much explanation beyond that. Technological change was, in the words of one of Solow’s contemporaries, “manna from heaven.”

Climate economics until recently was similarly oriented. Economists mostly treated global warming as a challenge of distributing scarce resources (e.g., the right to pollute), not of creating new ones (e.g., cheap zero carbon energy sources). Climate models treated technological innovation as a given, not as a dependent variable.

Fair enough – I had the same complaint in my dissertation in 1997.

That’s starting to change. Over the last few years, economists have modeled ways to accelerate the innovation of zero carbon power sources. The boldest of these entries to date comes from one of the discipline’s rising stars, MIT’s Daron Acemoglu, along with Philippe Aghion, Leonardo Bursztyn and David Hemous, in a paper published last February in American Economic Review. The paper argues that conventional climate models have overstated the importance of carbon pricing and understated the importance of public investment to encourage technological innovation.

The Economist’s Ryan Avent praised the paper, noting, “economics is clearly moving beyond the carbon-tax-alone position on climate change, which is a good thing.” In fact, Acemoglu and his colleagues went further than Avent suggested. “Optimal policy,” they found, “relies less on a carbon tax, and even more so on a direct encouragement of clean energy technologies.”

While this is a nice paper (related versions here and here), the result is less of a technology blockbuster than Breakthrough would have you believe. It’s highly stylized, particularly with respect to the climate system, so you have to take the quantitative results with a grain of salt. The paper doesn’t consider the class of policies that are thermodynamic losers, like CCS, that will never happen without an emissions price or some other incentive. There are no explicit delays in the innovation process, other than the time step. There’s no explicit supply/demand side separation (green energy vs. efficiency). The range of elasticities of substitution among sources explored is high. There are no problems controlling subsidies to cleantech.

I find the qualitative results very helpful – but the lessons from those don’t match Breakthrough’s typical message, that R&D in clean energy supply is sufficient to solve the climate problem. In the model, tech-only policy sometimes results in disaster, whereas price-only policy always works, but sometimes at an inefficiently high cost. One situation in which tech-only policy conspicuously fails is a starting point that is close to the brink of environmental catastrophe, in which there isn’t time for tech policy to take hold.

The Acemoglu et al. finding is not that optimal policy implies direct encouragement of cleantech that is somehow “bigger” than a carbon tax. It’s that, given cleantech policy, you can rely less on a carbon tax than you otherwise would, and benefit from a smaller and transient drag on growth. Importantly, they conclude, “(ii) optimal policy involves both ?carbon taxes ?and research subsidies, so that excessive use of carbon taxes can be avoided; (iii) delay in intervention is costly: the sooner and the stronger the policy response, the shorter will the slow growth transition phase be;” In fact, their tables indicate that the benefits of reduced reliance on taxes are much smaller than the costs of delay.

This technological turn within the economics profession comes at a time of three big events in the energy sector.

First, more than thirty years of government funding for unconventional gas research, demonstration, and tax credits have contributed to a glut of cheap natural gas, making everything from solar to wind to nuclear uncompetitive, at least in the near-term, while also driving America’s shift from coal to gas.

Second, the tripling of public and private sector investment in clean tech over the last five years has resulted in the price of solar panels declining by 75 percent and wind turbines by 25 percent, after no price declines in the prior five year period.

The causal chain for this would have to be something like clean tech $ triple -> R&D staff hired -> ideas generated -> products implement ideas -> products tested & refined -> factories built -> products sold. It’s totally implausible that all of that happened in five years, unless this is almost exclusively a story about deployment of technologies that were already in the pipeline. In addition, surely “no price declines” had something to do with a booming market, and subsequent price declines are partly an artifact of the subsequent bust, not to mention globalization. Fallacy of the single cause, anyone?

Third, carbon pricing, which many analysts and policy makers believed would be the central mechanism through which nations reduced emissions, has had no measurable impact. If Europe’s Emissions Trading Scheme (ETS) has had any impact on the continent’s emissions, it has been too small to measure with any certainty against falling energy consumption during the recession and large direct subsidies for renewables. Today, the ETS is being used to justify Europe’s reversion to coal.

All of this has sent those who believe carbon pricing should be the highest climate policy priority scrambling. Harvard economist and former Environmental Defense Fund (EDF) Chief Economist Robert Stavins claims that the low carbon prices of the ETS, and its little sister cap and trade system in the US Northeast, known as RGGI, prove not that they’re failing but rather that they are working as planned. The economist Charles Komanoff insists that a carbon tax would not suffer from the same problems as the ETS. And Paul Krugman asserts that a carbon price is still the most important climate policy because… well, because he’s Paul Krugman and he says so.

You can’t prove that pricing isn’t working in the ETS and RGGI, because their prices are roughly zero. Maybe cap & trade isn’t working, but that’s a matter of political emissions allocation, not price-emissions causality. Carbon taxes have been effective in Scandinavia; Krugman and Komanoff might actually know something.

One of the most detailed defenses of a carbon pricing-focused response to climate change comes from the economist Gernot Wagner of EDF, who in a debate with us at Breakthrough Journal credits pricing for the phase-out of leaded gasoline, and for the control of acid rain-causing sulfur dioxide pollution.

But history tells a very different story. In the case of leaded gasoline, eighty percent of the phase-out of leaded gas had already occurred before the establishment of a trading system, due to the ban on the sale of cars that could run on leaded gasoline after 1975, along with local air pollution rules. And the lower-than-expected cost of sulfur dioxide regulation mostly resulted from technological changes that occurred well before the establishment of pollution trading: rail deregulation allowed for the economic shipment of low-sulfur coal, and the development of cheaper scrubbers.

Nevertheless, it remains true that no one would have implemented scrubbers, or shipped coal, without the threat of impending markets or regulation. Fallacy of the single cause, again.

In the end, Wagner implicitly concedes our point, writing, “Yes, acid rain was mostly about deployment–which is/was my point.” In fact, that wasn’t his point. Wagner’s point was that it was the market-based pollution trading mechanism (again: the efficient allocation of a scarce resource) that resulted in the lower costs.

“Similarly,” Wagner writes, “we can achieve US emissions reduction goals for 2020 and possibly even 2030 through deployment of existing technologies.”

US emissions are declining primarily because we’re awash in unemployment. Substitution of gas for coal in the electric power sector has been an ongoing process, when prices were high as well as low, predating the fracking boom. In other sectors, it’s not clear that gas is substituting for coal (via electricity) – it may be that cheap gas will increase emissions. Since 2005, the biggest decline in emissions has come from petroleum, not coal. That’s primarily transport fuel, where gas is not a ready substitute. 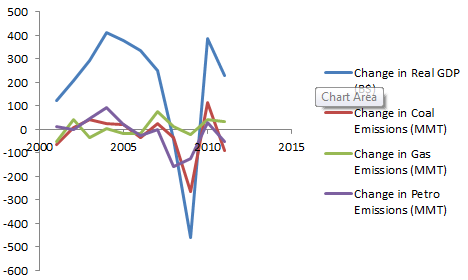 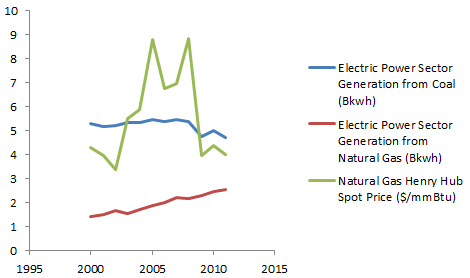 Out of real-world evidence, Wagner falls back on economic theory. “[C]arbon is a pollutant; we need make polluters pay… Price goes up, demand goes down. Economists typically call it the ‘law of demand’–one of the very few laws we’ve got.”

But no exceptions to the law of demand are required to acknowledge that it is the pace and scale of innovation, not the efficient allocation of existing emissions mitigation options, which will most determine the overall cost of mitigating and adapting to climate change.

Is there a law that says the pace and scale of innovation is unresponsive to prices? If not, then might we not consider using prices to create a profit incentive for mitigation innovation? Still more fallacy of the single cause.

In the end, Gernot summed up our disagreement well:

It is, in fact, economics 101 that tells us to cap or tax pollution. It’s economics 102 that teaches us about the process of technical progress, a place where Breakthrough could serve a very useful purpose. Denying economics 101 while trying to make an economics 102 point, though, isn’t the way to go.

This has nothing to do with Gernot’s point. Markets clear whether you’re talking about dung or thorium. Technical change is a complement to supply and demand, not an alternative.

Over the next century, global energy demand will double, and perhaps triple. But even were energy consumption to stay flat, significantly reducing emissions from today’s levels will require the creation of disruptive new technologies. It’s a task for which a doctrine focused on the efficient allocation of scarce resources could hardly be more ill-suited.

If efficiency doesn’t matter, how exactly do Nordhaus and Shellenberger propose to allocate R&D funding?

The strange thing here is that this is a strawdog controversy. I don’t recall hearing any economists argue that prices are the exclusive climate remedy, and there’s an extensive literature exploring subsidies and other corrections for R&D market failures. Acemoglu et al. say as much:

Frank Ackerman has a second opinion.

9 thoughts on “Reading between the lines”