An interesting article in PLOS one explores the consequences of a system of random feedbacks:

To get a handle on how this works, I replicated the model (see my library).

The basic mechanism of the model is rein control, in which multiple unidirectional forces on a system act together to yield bidirectional feedback control. By analogy, the reins on a horse can only pull in one direction, but with a pair of reins, it’s possible to turn both left and right.

In the model, there’s a large random array of reins, consisting of biotic feedbacks that occur near a particular system state. In the simple one-dimensional case, when you add a bunch of these up, you get a 1D vector field that looks like this: 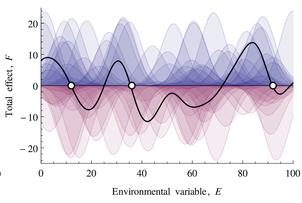 If this looks familiar, there’s a reason. What’s happening along the E dimension is a lot like what happens along the time dimension in pink noise: at any given point, the sum of a lot of random impulses yield a wiggly net response, with a characteristic scale yielded by the time constant (pink noise) or niche width of biotic components (rein control).

What this yields is an alternating series of unstable (tipping) points and stable equilibria. When the system is perturbed by some external force, the disturbance shifts the aggregate response, as below. Generally, a few stable points may disappear, but the large features of the landscape are preserved, so the system resists the disturbance. 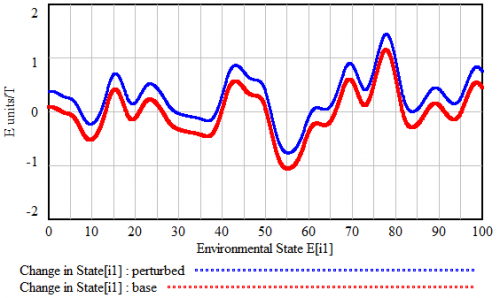 With a higher-dimensional environmental state, this creates convoluted basins of attraction: 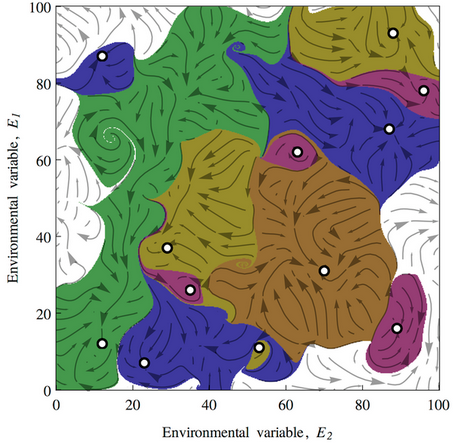 This leads to a variety of conclusions about ecological stability, for which I encourage you to have a look at the full paper. It’s interesting to ponder the applicability and implications of this conceptual model for social systems.