One of the central tenets of system dynamics and systems thinking is that structure causes behavior. This is often described as an iceberg, with events at as the visible tip, and structure as greater submerged bulk. Patterns of behavior, in the middle, are sequences of events that may signal the existence of the underlying structure.

The header of the current Wikipedia article on the California electricity crisis is a nice illustration of the difference between event and structural descriptions of a problem.

The California electricity crisis, also known as the Western U.S. Energy Crisis of 2000 and 2001, was a situation in which the United States state of California had a shortage of electricity supply caused by market manipulations, illegal[5] shutdowns of pipelines by the Texas energy consortium Enron, and capped retail electricity prices.[6] The state suffered from multiple large-scale blackouts, one of the state’s largest energy companies collapsed, and the economic fall-out greatly harmed GovernorGray Davis’ standing.

Drought, delays in approval of new power plants,[6]:109 and market manipulation decreased supply.[citation needed] This caused an 800% increase in wholesale prices from April 2000 to December 2000.[7]:1 In addition, rolling blackouts adversely affected many businesses dependent upon a reliable supply of electricity, and inconvenienced a large number of retail consumers.

California had an installed generating capacity of 45GW. At the time of the blackouts, demand was 28GW. A demand supply gap was created by energy companies, mainly Enron, to create an artificial shortage. Energy traders took power plants offline for maintenance in days of peak demand to increase the price.[8][9] Traders were thus able to sell power at premium prices, sometimes up to a factor of 20 times its normal value. Because the state government had a cap on retail electricity charges, this market manipulation squeezed the industry’s revenue margins, causing the bankruptcy of Pacific Gas and Electric Company (PG&E) and near bankruptcy of Southern California Edison in early 2001.[7]:2-3

The financial crisis was possible because of partial deregulation legislation instituted in 1996 by the California Legislature (AB 1890) and Governor Pete Wilson. Enron took advantage of this deregulation and was involved in economic withholding and inflated price bidding in California’s spot markets.[10]

This is mostly a dead buffalo description of the event: 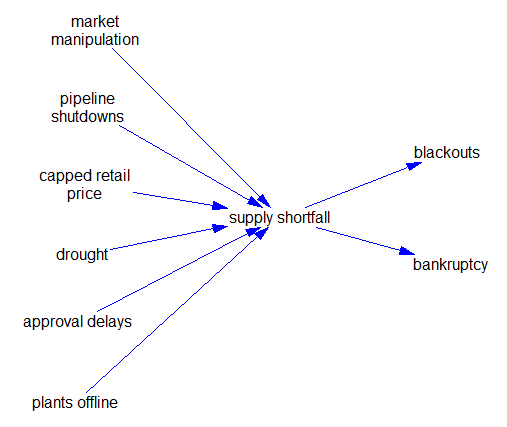 It offers only a few hints about the structure that enabled these events to unfold. It would be nice if the article provided a more operational description of the problem up front. (It does eventually get there.) Here’s a stab at it: 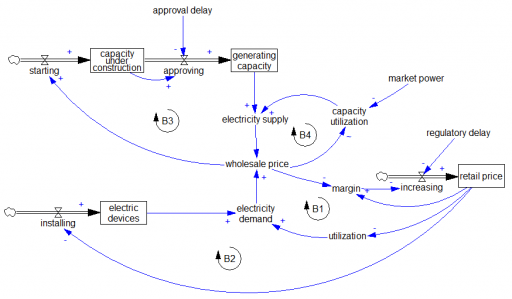 A normal market manages supply and demand through four balancing loops. On the demand side, in the short run utilization of electricity-consuming devices falls with increasing price (B1). In the long run, higher prices also suppress installation of new devices (B2). In parallel on the supply side, higher prices increase utilization in the short run (B4) and provide an incentive for capacity investment in the long run (B3).

The California crisis happened because these market-clearing mechanisms were not functioning. Retail pricing is subject to long regulatory approval lags, so there was effectively no demand price elasticity response in the short run, i.e. B1 and B2 were ineffective. The system might still function if it had surplus capacity, but evidently long approval delays prevented B3 from creating that. Even worse, the normal operation of B4 was inverted when Enron amassed sufficient market power. That inverted the normal competitive market incentive to increase capacity utilization when prices are high. Instead, Enron could deliberately lower utilization to extract monopoly prices. If any of B1-B3 had been functioning, Enron’s ability to exploit B4 would have been greatly diminished, and the crisis might not have occurred.

I find it astonishing that deregulation created such a dysfunctional market. The framework for electricity markets was laid out by Caramanis, Schweppe, Tabor & Bohn – they literally wrote the book on Spot Pricing of Electricity. Right in the introduction, page 5, it cautions:

Five ingredients for a successful marketplace are

I guess the market designers thought these were optional?