I think the many chapters of health care changes in the Ryan proposal are actually a distraction from the primary change. It’s this:

This ostensibly results in a revenue trajectory that rises to a little less than 19% of GDP, roughly the postwar average. The CBO didn’t analyze this; it used a trajectory from Ryan’s staff. The numbers appear to me to be delusional.

For sub-$50k returns in the new 10% bracket, this does not appear to be a break. Of those returns, currently over 2/3 pay less than a 5% average tax rate. It’s not clear what the distribution of income is within this bracket, but an individual would only have to make about $25k to be worse off than the median earner, it appears. The same appears to be true in the $100k-200k bracket. A $150k return with a $39k exemption for a family of four would pay 18.5% on average, while the current median is 10-15%. This is certainly not a benefit to wage earners, though the net effect is ambiguous (to me at least) because of the change in treatment of asset income.

The elimination of tax on interest, dividends and capital gains is really the big story here. For returns over $200k, wages are less than 42% of AGI. Interest, dividends and gains are over 35%. The termination of asset taxes means that taxes fall by about a third on high income returns (the elimination of the mortgage interest deduction does little to change that). The flat 25% marginal rate can’t possibly make up for this, because it’s not different enough from the ~20% median effective tax rate in that bracket. For the top 400 returns in the US, exemption of asset income would reduce the income basis by 70%, and reduce the marginal tax rate from the ballpark of 35% to 25%.

It seems utterly delusional to imagine that this somehow returns to something resembling the postwar average tax burden, unless setting taxes on assets to zero is accompanied by a net increase in other taxes (i.e. wages, which constitute about 70% of total income). That in turn implies a tax increase for the lower brackets, a substantial cut on returns over $200k, and a ginormous cut for the very highest earners.

This is all exacerbated by the simultaneous elimination of corporate taxes, which are already historically low and presumably have roughly the same incidence as individual asset income, making the cut another gift to the top decile. With rates falling from 35% at the margin to 8.5% on “consumption” (a misnomer – the title calls it a “business consumption tax” but the language actually taxes “gross profits”, which is in turn a misnomer because investment is treated as a current year expense). The repeal of the estate tax, of which 80% is currently collected on estates over $5 million (essentially 0% below $2 million) has a similar distributional effect.

I think it’s reasonable to discuss cutting corporate taxes, which do appear to be cross sectionally high. But if you’re going to do that, you need to somehow maintain the distributional characteristics of the tax system, or come up with a rational reason not to, in the face of increasing inequity of wealth.

I can’t help wondering whether there’s any analysis behind these numbers, or if they were just pulled from a hat by lawyers and lobbyists. This simply isn’t a serious proposal, except for people who are serious about top-bracket tax cuts and drowning the government in a bathtub.

Given that the IRS knows the distribution of individual income in exquisite detail, and that much of the aggregate data needed to analyze proposals like those above is readily available on the web, it’s hard to fathom why anyone would even entertain the idea of discussing a complex revenue proposal like Ryan’s without some serious analytic support and visualization. This isn’t rocket science, or even bathtub dynamics. It’s just basic accounting – perfect stuff for a spreadsheet. So why are we reviewing this proposal with 19th century tools – an overwhelming legal text surrounded by a stew of bogus rhetoric?

The Ryan budget proposal achieves the bulk of its savings by cutting health care outlays, particularly Medicare and Medicaid. The mechanism sounds a lot like a firm’s transition from a defined benefits pension plan to a defined contribution scheme. Medicaid becomes a system of block grants to states, and Medicare becomes a system of flat-rate vouchers. Along the way, it has some useful aspirations: to separate health insurance from employment and eliminate health’s favored tax status.

Reading some of the finer print, though, I don’t think it really fixes the fundamental flaws of the current system. It’s billed as “universal access” but that’s a misnomer. It guarantees universal access to a tax credit or voucher that can be used to purchase coverage, but not universal access to coverage. That’s because it doesn’t solve the adverse selection problem. As a result, any provider that doesn’t play the usual game of excluding anyone who’s really sick from coverage (using preexisting conditions and rotating plan changes) will suffer a variant of the utility death spiral: increasing costs drive the healthy out of the plan, leaving it to serve a diminishing set of members who had the misfortune to get sick, at an escalating cost.

Universal access to coverage is left to the states, who can create assigned risk pools or other methods to cover the uncoverable. Leaving things to the states strikes me as a reasonable strategy, because the health system is so complex that evolutionary learning is likely to beat the kind of deliberate design we’ll get out of congress. But it’s not clear to me that the proposal creates any real authority to raise money to support these assigned risk pools; without money, the state mechanisms will be rather perfunctory.

The real challenge seems to me to be to address three features of health:

What’s needed is a distributed way to share risk (which is why it’s called insurance), while preserving incentives for good behavior and matching total expenditures to resources. That’s a tall order. It’s not clear to me that the Ryan proposal tackles it in any serious way; it just extends the flaws of the current system to Medicare patients. 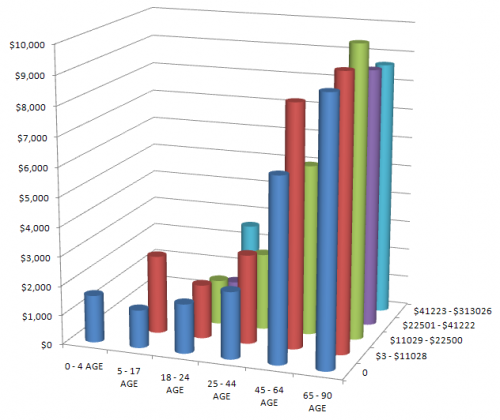 Per capita annual medical expenditures from the MEPS panel, by age and income. There’s surprisingly little variation by income, but a lot by age. The bill terminates the agency that collects this data. 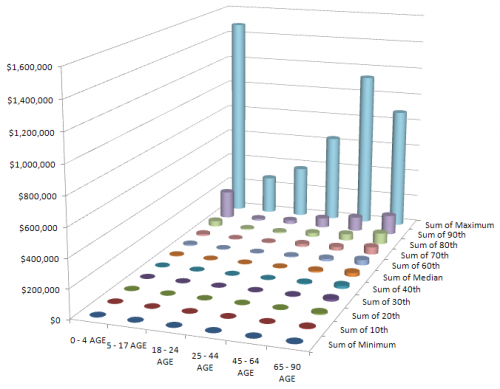 Health expenditures by age and decile of cohort, showing the extreme concentration of expenditures at all ages.

The really fine print, the text of the bill itself, is daunting – 629 pages. This strikes me as simply unmanageable (like the deceased cap and trade legislation). There are simply too many opportunities for unintended consequences, and hidden agendas, in such a multifaceted approach, especially with the opaque analytic support available. Surely this could be tackled in a series of smaller bites – health, revenue, other expenditures. It calls to mind the criticism of the FAA’s repeated failure to redesign the air traffic control system, “you can’t design a system that evolved.” Well, maybe you can, but not with the kind of tools and discourse that now prevail.

Since the budget deal was announced, I’ve been wondering what was in it. It’s hard to imagine that it really works like this:

“This is an agreement to invest in our country’s future while making the largest annual spending cut in our history,” Obama said.

However, it seems that there isn’t really much substance to the deal yet, so I thought I’d better look instead at one target: the Ryan budget roadmap. The CBO recently analyzed it, and put the $ conveniently in a spreadsheet.

Like most spreadsheets, this is very good at presenting the numbers, and lousy at revealing causality. The projections are basically open-loop, but they run to 2084. There’s actually some justification for open-loop budget projections, because many policies are open loop. The big health and social security programs, for example, are driven by demographics, cutoff ages and inflation adjustment formulae. The demographics and cutoff ages are predictable. It’s harder to fathom the possible divergence between inflation adjustments and broad inflation (which affects the health sector share) and future GDP growth. So, over long horizons, it’s a bit bonkers to look at the system without considering feedback, or at least uncertainty in the future trajectory of some key drivers.

There’s also a confounding annoyance in the presentation, with budgets and debt as percentages of GDP. Here’s revenue and “other” expenditures (everything but social security, health and interest): 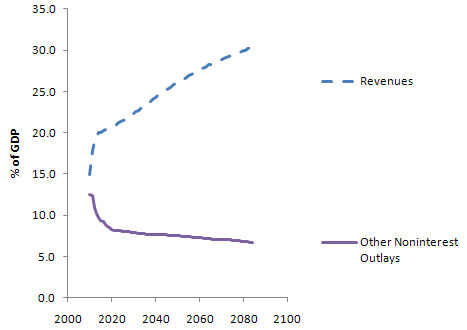 There’s a huge transient in each, due to the current financial mess. (Actually this behavior is to some extent deliberately Keynesian – the loss of revenue in a recession is amplified over the contraction of GDP, because people fall into lower tax brackets and profits are more volatile than gross activity. Increased borrowing automatically takes up the slack, maintaining more stable spending.) The transient makes it tough to sort out what’s real change, and what is merely the shifting sands of the GDP denominator. This graph also points out another irritation: there’s no history. Is this plausible, or unprecedented behavior?

The Ryan team actually points out some of the same problems with budgets and their analyses:

One reason the Federal Government’s major entitlement programs are difficult to control is that they are designed that way. A second is that current congressional budgeting provides no means of identifying the long-term effects of near-term program expansions. A third is that these programs are not subject to regular review, as annually appropriated discretionary programs are; and as a result, Congress rarely evaluates the costs and effectiveness of entitlements except when it is proposing to enlarge them. Nothing can substitute for sound and prudent policy choices. But an improved budget process, with enforceable limits on total spending, would surely be a step forward. This proposal calls for such a reform.

Setting aside these gripes, here’s what I can glean from the spreadsheet.

The Ryan proposal basically flatlines revenue at 19% of GDP, then squashes programs to fit. By contrast, the CBO Extended Baseline scenario expands programs per current rules and then raises revenue to match (very roughly – the Ryan proposal actually winds up with slightly more public debt 20 years from now). 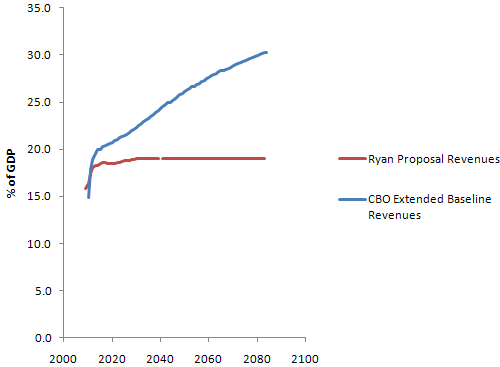 It’s not clear how the 19% revenue level arises; the CBO used a trajectory from Ryan’s staff, not its own analysis. Ryan’s proposal says:

It’s not clear that there’s any analysis to back up the effects of this proposal. Certainly it’s an extremely regressive shift. Real estate fans will flip when they find out that the mortgage interest deduction is gone (actually a good idea, I think).

On the outlay side, here’s the picture (CBO in solid lines; Ryan proposal with dashes): 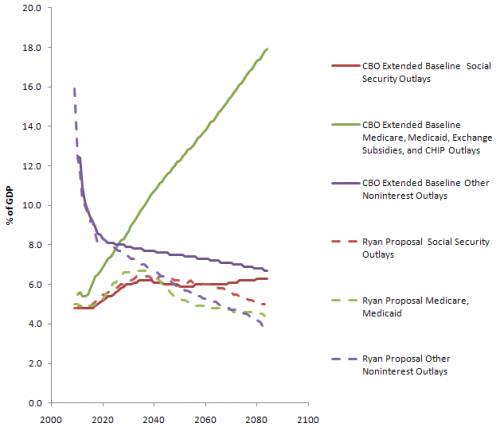 You can see several things here:

You can also look at the ratio of outlays under Ryan vs. CBO’s Extended Baseline: 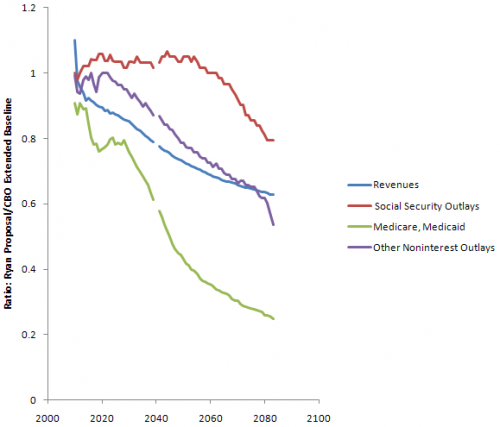 Since health care carries the flag for savings, the question is, will the proposal work? I’ll take a look at that next.

There’s an interesting discussion about a CNN poll of public perceptions of the federal budget over at Statistical Modeling. Don’t bias yourself – check it out and test yourself before you peek at my contribution below the fold.