Geoffrey Miller wonders why we haven’t met aliens. I think his proposed answer has a lot to do with the state of the world and why it’s hard to sell good modeling.

I don’t know why this 2006 Seed article bubbled to the top of my reader, but here’s an excerpt:

The story goes like this: Sometime in the 1940s, Enrico Fermi was talking about the possibility of extraterrestrial intelligence with some other physicists. … Fermi listened patiently, then asked, simply, “So, where is everybody?” That is, if extraterrestrial intelligence is common, why haven’t we met any bright aliens yet? This conundrum became known as Fermi’s Paradox.

It looks, then, as if we can answer Fermi in two ways. Perhaps our current science over-estimates the likelihood of extraterrestrial intelligence evolving. Or, perhaps evolved technical intelligence has some deep tendency to be self-limiting, even self-exterminating. …

I suggest a different, even darker solution to the Paradox. Basically, I think the aliens don’t blow themselves up; they just get addicted to computer games. They forget to send radio signals or colonize space because they’re too busy with runaway consumerism and virtual-reality narcissism. …

The fundamental problem is that an evolved mind must pay attention to indirect cues of biological fitness, rather than tracking fitness itself. This was a key insight of evolutionary psychology in the early 1990s; although evolution favors brains that tend to maximize fitness (as measured by numbers of great-grandkids), no brain has capacity enough to do so under every possible circumstance. … As a result, brains must evolve short-cuts: fitness-promoting tricks, cons, recipes and heuristics that work, on average, under ancestrally normal conditions.

The result is that we don’t seek reproductive success directly; we seek tasty foods that have tended to promote survival, and luscious mates who have tended to produce bright, healthy babies. … Technology is fairly good at controlling external reality to promote real biological fitness, but it’s even better at delivering fake fitness—subjective cues of survival and reproduction without the real-world effects.

Fitness-faking technology tends to evolve much faster than our psychological resistance to it.

… I suspect that a certain period of fitness-faking narcissism is inevitable after any intelligent life evolves. This is the Great Temptation for any technological species—to shape their subjective reality to provide the cues of survival and reproductive success without the substance. Most bright alien species probably go extinct gradually, allocating more time and resources to their pleasures, and less to their children. They eventually die out when the game behind all games—the Game of Life—says “Game Over; you are out of lives and you forgot to reproduce.”

The secret of life is honesty and fair dealing… if you can fake that, you’ve got it made. – Attributed to Groucho Marx

The general problem for corporations and countries is that there’s a big problem attributing success to individuals. People rise in power, prestige and wealth by creating the impression of fitness, rather than creating any actual fitness, as long as there are large stocks that separate action and result in time and space and causality remains unclear. That means that there are two paths to oblivion. Miller’s descent into a self-referential virtual reality could be one. More likely, I think, is sinking into a self-deluded reality that erodes key resource stocks, until catastrophe follows – nukes optional.

The antidote for the attribution problem is good predictive modeling. The trouble is, the truth isn’t selling very well. I suspect that’s partly because we have less of it than we typically think. More importantly, though, leaders who succeeded on BS and propaganda are threatened by real predictive power. The ultimate challenge for humanity, then, is to figure out how to make insight about complex systems evolutionarily successful.

The answer is evidently now “no”, but until recently the UofM’s Bureau of Business and Economic Research director Patrick Barkey thought so:

“As early as last summer we still thought Montana would escape this recession,” he said. “We knew the national economic climate was uncertain, but Montana had been doing pretty well in the previous two recessions. We now know this is a global recession, and it is a more severe recession, and it’s a recession that’s not going to leave Montana unscathed.”

Indeed, things aren’t as bad here as they are in a lot of other places – yet. Compare our housing prices to Florida’s:

On the other hand, our overall economic situation shows a bigger hit than some places with hard-hit housing markets. Here’s the Fed’s coincident index vs. California: 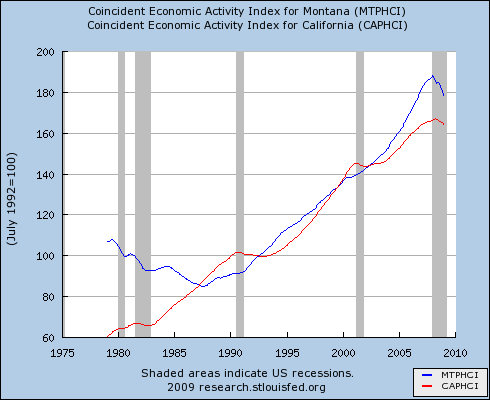 As one would expect, the construction and resource sectors are particularly hard hit by the double-whammy of housing bubble and commodity price collapse. In spite of home prices that seem to have held steady so far, new home construction has fallen dramatically: 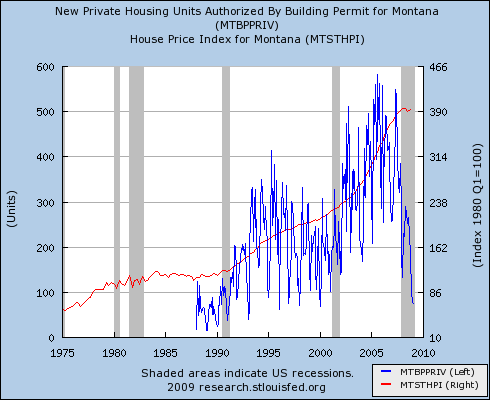 Interestingly, that hasn’t hit construction employment as hard as one would expect. Mining and resources employment has taken a similar hit, though you can hardly see it here because the industry is comparatively small (so why is its influence on MT politics comparatively large?). 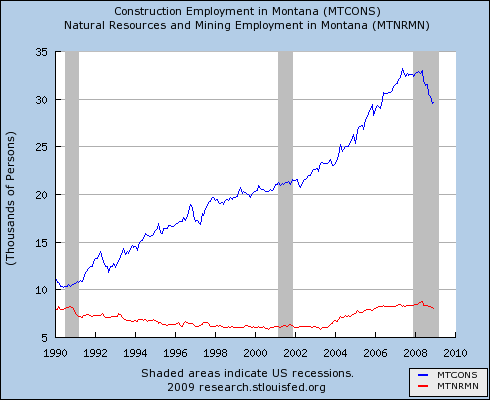 So, where’s the bottom? For metro home prices nationwide, futures markets think it’s 10 to 20% below today, some time around the end of 2010. If the recession turns into a depression, that’s probably too rosy, and it’s hard to see how Montana could escape the contagion. But the impact will certainly vary regionally. The answer for Montana likely depends a lot on two factors: how bubbly was our housing market, and how recession-resistant is our mix of economic activity?

On the first point, here’s the Montana housing market (black diamonds), compared to the other 49 states and DC: 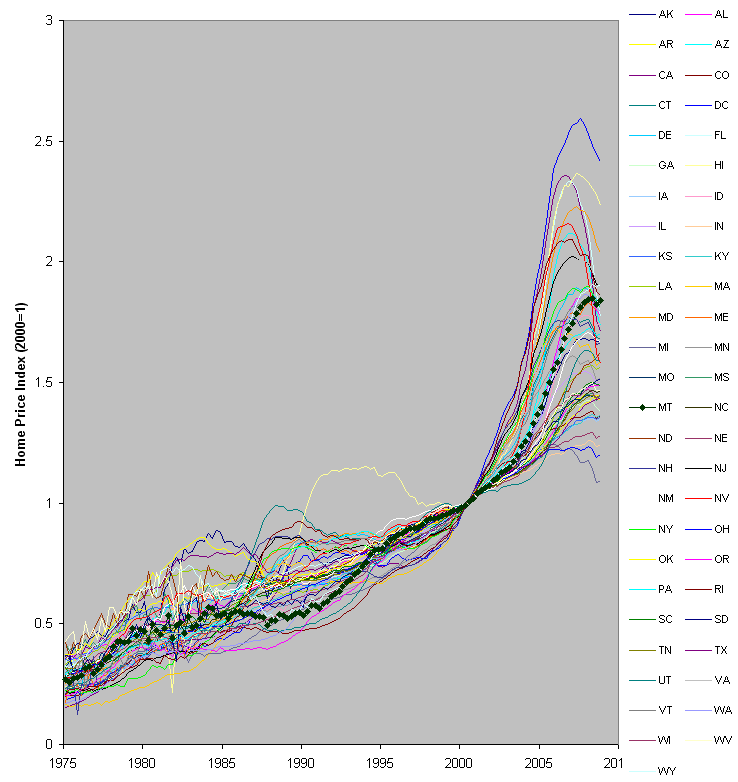 Prices above are normalized to 2000 levels, using the OFHEO index of conforming loan sales (which is not entirely representative – read on). At the end of 2003, Montana ranked 20th in appreciation from 2000. At the end of 2008, MT was 8th. Does the rise mean that we’re holding strong on fundamentals while others collapse? Or just that we’re a bunch of hicks, last to hear that the party’s over? Hard to say.

It’s perhaps a little easier to separate fundamentals from enthusiasm by looking at prices in absolute terms. Here, I’ve used the Census Bureau’s 2000 median home prices to translate the OFHEO index into $ terms: 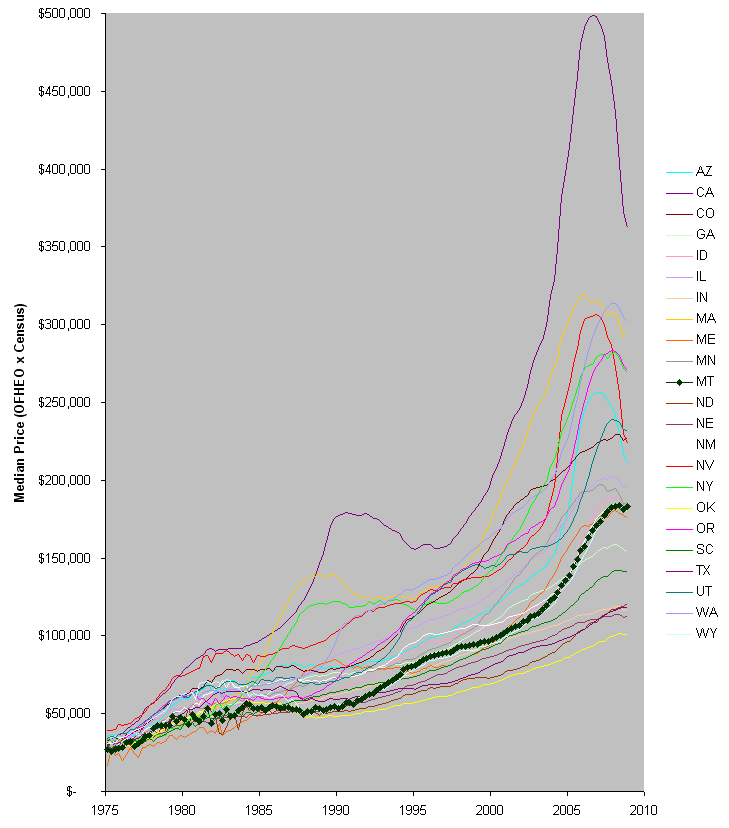 Among its western region peers, a few other large states, and random states I like, Montana starts to look like a relative bargain still. The real question then is whether demographic trends (latte cowboys like me moving in) can buoy the market against an outgoing tide. I suspect that we’ll fare reasonably well in the long run, but suffer a significant undershoot in the near term.

The OFHEO indices above are a little puzzling, in that so many states seem to be just now, or not yet, peaking. For comparison, here are the 20 metro areas in the CSI index (lines), together with Gallatin County’s median prices (bars): 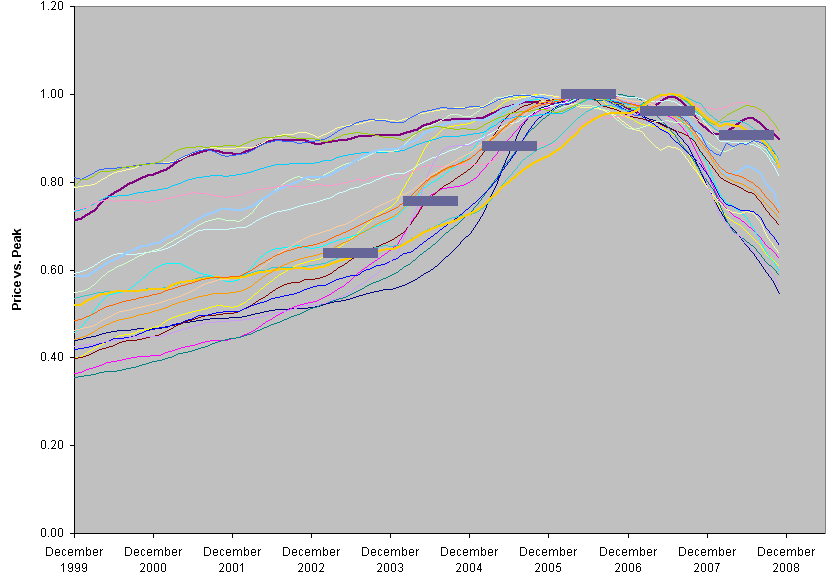 These more representative indices still show Montana holding up comparatively well, but with Gallatin County peaking in 2006. I suspect that the OFHEO index is a biased picture of the wider market, due to its exclusion of nonconforming loans, and that this is a truer picture.