I’ve seen a lot of attention lately to restoration of extinct species. It strikes me as a band-aid, not a solution.

Here’s the core of the system: 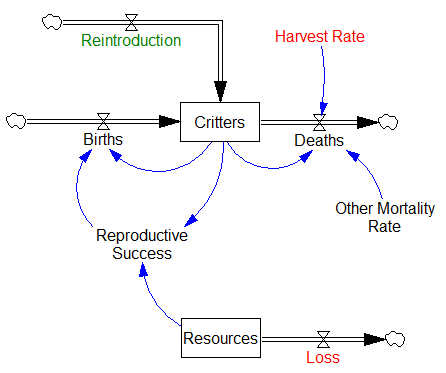 Critters don’t go extinct for lack of human intervention. They go extinct because the balance of birth and death rates is unfavorable, so that population declines, and (stochastically) winks out.

That happens naturally of course, but anthropogenic extinctions are happening much faster than usual. The drivers (red) are direct harvest and loss of the resource base on which species rely. The resource base is largely habitat, but also other species and ecosystem services that are themselves harvested, poisoned by pollutants, etc.

Reintroducing lost species may be helpful in itself (who wouldn’t want to see millions of passenger pigeons?), but unless the basic drivers of overharvest and resource loss are addressed, species are reintroduced into an environment in which the net gain of births and deaths favors re-extinction. What’s the point of that?

If the drivers of extinction – ultimately population and capital growth plus bad management – were under control, we wouldn’t need much restoration. If they’re out of control, genetic restoration seems likely to be overwhelmed, or perhaps even to contribute to problems through parachuting cats side effects. 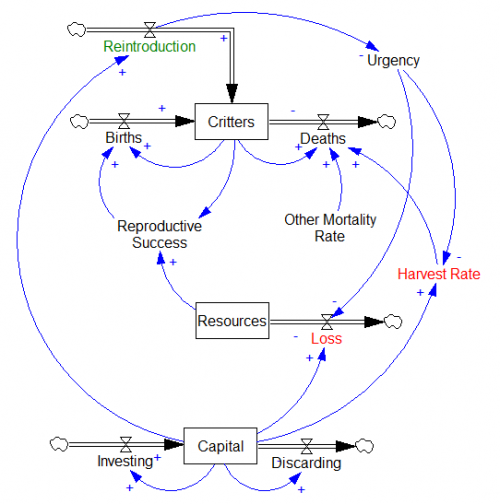 This is not where I’d be looking for leverage.

Sugihara et al. have a really interesting paper in Science, on detection of causality in nonlinear dynamic systems. It’s paywalled, so here’s an excerpt with some comments.

Abstract: Identifying causal networks is important for effective policy and management recommendations on climate, epidemiology, financial regulation, and much else. We introduce a method, based on nonlinear state space reconstruction, that can distinguish causality from correlation. It extends to nonseparable weakly connected dynamic systems (cases not covered by the current Granger causality paradigm). The approach is illustrated both by simple models (where, in contrast to the real world, we know the underlying equations/relations and so can check the validity of our method) and by application to real ecological systems, including the controversial sardine-anchovy-temperature problem.

Identifying causality in complex systems can be difficult. Contradictions arise in many scientific contexts where variables are positively coupled at some times but at other times appear unrelated or even negatively coupled depending on system state.

Although correlation is neither necessary nor sufficient to establish causation, it remains deeply ingrained in our heuristic thinking. … the use of correlation to infer causation is risky, especially as we come to recognize that nonlinear dynamics are ubiquitous. END_OF_DOCUMENT_TOKEN_TO_BE_REPLACED 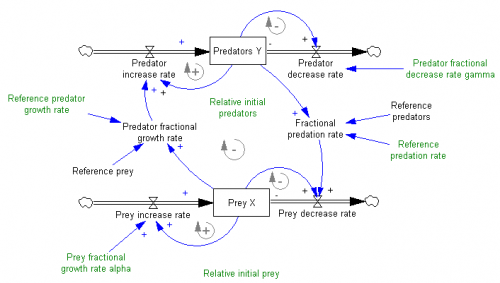 END_OF_DOCUMENT_TOKEN_TO_BE_REPLACED

I ran across a nice factual account of the fantastic “cat drop” story of ecological side effects immortalized in Alan Atkisson’s song.

It reminded me of another great account of the complex side effects of ecosystem disturbance, from the NYT last year, supplemented with a bit of wikipedia:

But this time, administrators are prepared to make course corrections if things do not turn out according to plan.“This study clearly demonstrates that when you’re doing a removal effort, you don’t know exactly what the outcome will be,” said Barry Rice, an invasive species specialist at the Nature Conservancy. “You can’t just go in and make a single surgical strike. Every kind of management you do is going to cause some damage.”