A PLOS Medicine paper asserts that most published results are false.

It can be proven that most claimed research findings are false

Corollary 1: The smaller the studies conducted in a scientific field, the less likely the research findings are to be true.

Corollary 2: The smaller the effect sizes in a scientific field, the less likely the research findings are to be true.

Corollary 3: The greater the number and the lesser the selection of tested relationships in a scientific field, the less likely the research findings are to be true.

Corollary 4: The greater the flexibility in designs, definitions, outcomes, and analytical modes in a scientific field, the less likely the research findings are to be true.

Corollary 5: The greater the financial and other interests and prejudices in a scientific field, the less likely the research findings are to be true.

Corollary 6: The hotter a scientific field (with more scientific teams involved), the less likely the research findings are to be true.

This somewhat alarming result arises from fairly simple statistics of false positives, publication selection bias, and causation vs. correlation problems. While the math is incontrovertible, some of the assumptions have been challenged:

… calculating the unreliability of the medical research literature, in whole or in part, requires more empirical evidence and different inferential models than were used. The claim that “most research findings are false for most research designs and for most fields” must be considered as yet unproven.

Still, the argument seems to be a matter of how much rather than whether publication bias influences findings:

We agree with the paper’s conclusions and recommendations that many medical research findings are less definitive than readers suspect, that P-values are widely misinterpreted, that bias of various forms is widespread, that multiple approaches are needed to prevent the literature from being systematically biased and the need for more data on the prevalence of false claims.

This is obviously a big problem from a control perspective, because the kind of information provided by the studies in question is key to managing many systems, as in Nancy Leveson‘s pharma safety example: 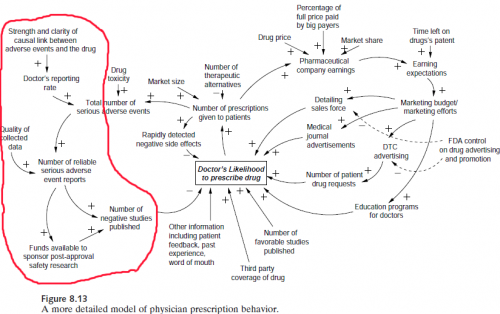 It’s also leads me to a rather pointed self-question. To what extent is typical system dynamics modeling practice subject to the same kinds of biases? Can we say not only that all models are wrong, but that most are useless?

My suspicion is that savvy modelers are already well aware of just how messy and uncertain their problem domains are. Decisions will be taken, with or without a model, so the real objective is to use the model to add value by rejecting ideas that don’t work. The problem then is not that wrong models make decisions worse, but that we could probably do a lot better if we could be smarter about the possible biases in models and thinking in general.

Alex Tabarrok at Marginal Revolution has a nice take on remedies:

What can be done about these problems? (Some cribbed straight from Ioannidis and some my own suggestions.)

1) In evaluating any study try to take into account the amount of background noise. That is, remember that the more hypotheses which are tested and the less selection which goes into choosing hypotheses the more likely it is that you are looking at noise.

2) Bigger samples are better. (But note that even big samples won’t help to solve the problems of observational studies which is a whole other problem).

3) Small effects are to be distrusted.

4) Multiple sources and types of evidence are desirable.

7) As an editor or referee, don’t reject papers that fail to reject the null.

10) Help clients to appreciate the extent and implications of uncertainty.

11) Pay attention to the language used to describe statistical concepts. Words like “expectation” and “significance” that have specific mathematical interpretations don’t mean the same thing to managers.

11) Look for robust policies that work irrespective of uncertain relationships.

12) Explicitly seek out and test alternative hypotheses (This sounds like it’s at odds with Corollary 3 above, but I think it’s the right thing to do. Testing multiple hypotheses in the context of the model is not the same thing as mining data for multiple relationships.).

13) If you can’t estimate something directly from data, or back it up with literature (more than a single paper), at least articulate some bounds on the effect, perhaps through experiments with a submodel.

What do you think? When is modeling and statistical analysis helpful, and when is it risky business?