China’s one child policy is at its 30th birthday. Inside-Out China has a quick post on the debate over the future of the policy. That caught my interest, because I’ve seen recent headlines calling for an increase in China’s population growth to facilitate dealing with an aging population – a potentially disastrous policy that nevertheless has adherents in many countries, including the US.

Here are the age structures of some major countries, young and old: 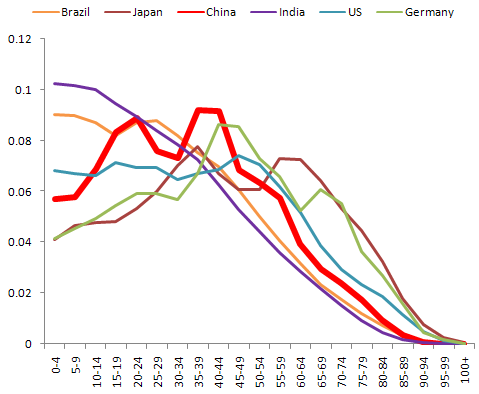 Vertical axis indicates the fraction of the population that resides in each age category.

Germany and Japan have the pig-in-the-python shape that results from falling birthrates. The US has a flatter age structure, presumably due to a combination of births and immigration. Brazil and India have very young populations, with the mode at the left hand side. Given the delay between birth and fertility, that builds in a lot of future growth.

Compared to Germany and Japan, China hardly seems to be on the verge of an aging crisis. In any case, given the bathtub delay between birth and maturity, a baby boom wouldn’t improve the dependency ratio for almost two decades.

More importantly, growth is not a sustainable strategy for coping with aging. At the same time that growth augments labor, it dilutes the resource base and capital available per capita. If you believe that people are the ultimate resource, i.e. that increasing returns to human capital will create offsetting technical opportunities, that might work. I rather doubt that’s a viable strategy though; human capital is more than just warm bodies (of which there’s no shortage); it’s educated and productive bodies – which are harder to get. More likely, a growth strategy just accelerates the arrival of resource constraints. In any case, the population growth play is not robust to uncertainty about future returns to human capital – if there are bumps on the technical road, it’s disastrous.

To say that population growth is a bad strategy for China is not necessarily to say that the one child policy should stay. If its enforcement is spotty, perhaps lifting it would be a good thing. Focusing on incentives and values that internalize population tradeoffs might lead to a better long term outcome than top-down control.