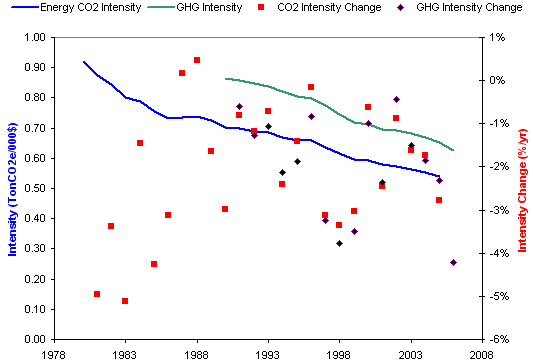 In the context of the long term,-2.5% over 4 years is still hard to separate from noise. Even the 2006 reduction (last black point) does not approach reductions in the OPEC era, nor does recent performance stand out amid the 4-year smoothed trend for US emissions intensity over 200 years: 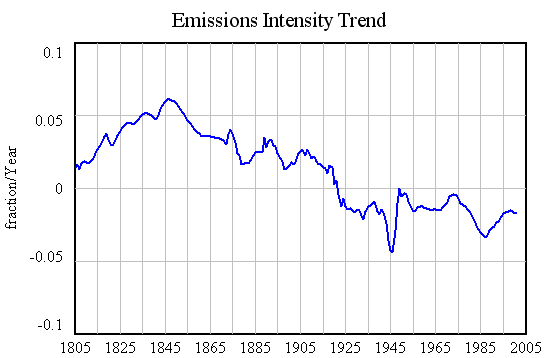 In early 2003, I downloaded the following schematic from a White House or DOE web site (unfortunately I don’t recall which):

The new administration policy represents a change from the purple 2012 National Goal trajectory to the first half of the burgundy “stop” trajectory (up to the “t” in stop, representing 2025).* I used a simple scenario-generating model tuned to EIA data to put hard numbers to the figure above. Here are three scenarios: business-as-usual (blue, GDP growing 3%/yr, intensity falling 1.4%/yr), the 2012 goal (intensity falling an additional 0.4%/yr from 2002), and the 2025 goal (red, intensity reduction gradually increasing from 1.8%/yr in 2008 to match GDP growth in 2025). 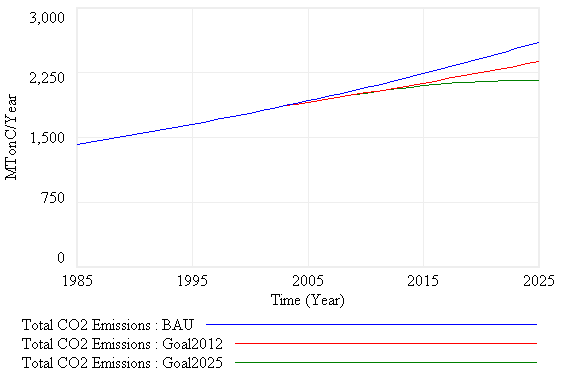 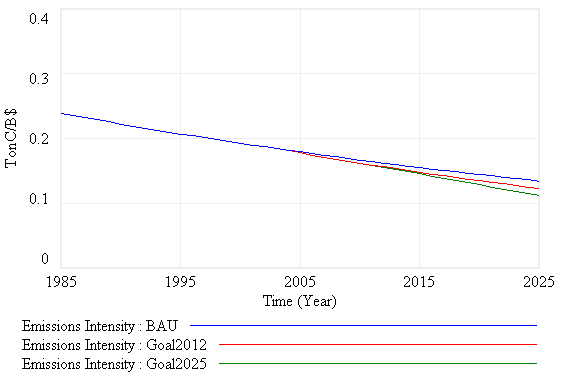 *Update Looking at the White House fact sheet, it appears that the administration does now consider the reversal trajectory in its earlier schematic,

The growth in emissions will slow over the next decade, stop by 2025, and begin to reverse thereafter, so long as technology continues to advance.

According to Bush’s speech, the burden of the reversal falls particularly heavily on electric utilities:

… we’ve got to do more in the power generation sector. To reach our 2025 goal, we’ll need to more rapidly slow the growth of power sector greenhouse gas emissions so they peak within 10 to 15 years, and decline thereafter.