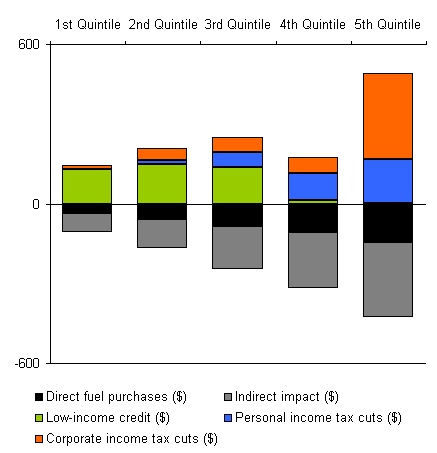 As a share of income, things look a little different. It seems hard to get excited about effects this small, but of course the tax will rise by a factor of 3 (more, eventually). If you believe in diminishing returns to the marginal utility of consumption, then it’s clear that a focus on effects on low-income groups really is appropriate: 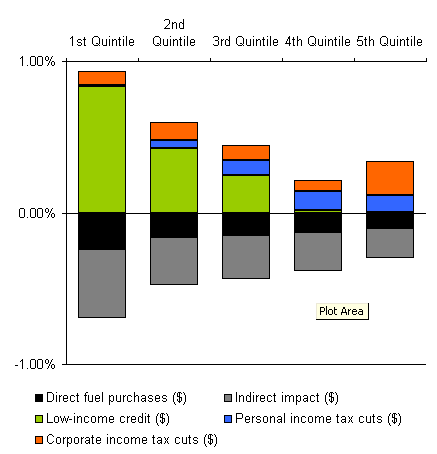 The report explores several compensation mechanisms, including a flat per-household rebate and an expanded low-income credit. However, the experiments retain a big chunk of the tax revenue for carbon-related projects. That might be sensible in some cases, but I think it’s not as likely to be popular, so I tried yet another alternative: a full flat rebate, which is much like an allocation of allowances on a per-capita basis in a cap & trade system: 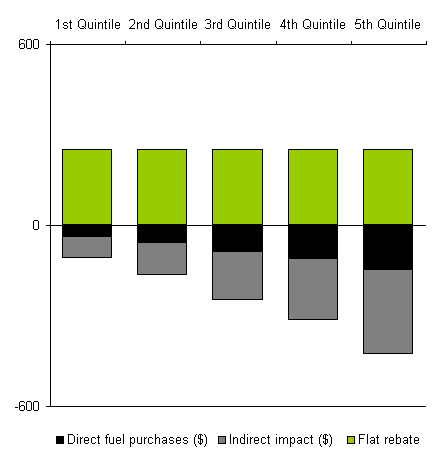 The report left me wondering about one thing: what happens when you consider greater granularity. What happens, for example, when you consider household size diversity within income groups? The most salient impact of the carbon tax on wallets is through fuel prices. Since hauling kids is a frequent rationale for inefficient vehicles, I could easily see pressure developing to make the tax more “family friendly.” I’m not entirely sympathetic; I have kids, but don’t regard them as an automatic claim on global environmental property rights. But nevertheless aspects of distribution, like this, might pose important practical and political considerations for the design of instruments.

Update (afterthought): Revenue recycling to reduce taxes is not generally what carbon-intensive firms and their shareholders and employees want. They’d rather be compensated for stranded assets and other dislocations, hence the push for grandfathered emissions allocations in cap & trade systems. The corporate tax relief provided by the BC carbon tax is too coarse to accomplish this; it compensates low-carbon industries as much as high-carbon ones. Better targeting of corporate tax relief might be a way to reduce the overcompensation of the 5th quintile (see figures above) and to make the transition to the tax more palettable to key sectors. I’d also like to see a bigger focus on employees; shareholders are (or should be) diversified and hedged; employees not so much.