Two more draft agreements have been released, from AOSIS and the AWG-LCA headed by Michael Zammit Cutajar. I’ve summarized the mitigation targets in the four drafts floating around as a Google spreadsheet, here.

The AOSIS draft is, understandably, very aggressive in its global vision. It seeks 350ppm or better, to limit temperature rise to 1.5C vs. preindustrial. To get there, it seeks a global emissions peak by 2015 and an 85% cut from 1990 levels by 2050. Developed countries are to cut 45% below 1990 by 2020. Deforestation is to be halved by 2020 and halted by 2030. The document gets wishy washy when it comes to other developing country actions though: it talks about NAMAs and “significant deviations from baselines by 2020,” but no specific commitments. In my mind, if you’ve specified targets for the world and for developed countries, you’ve implicitly specified the developing countries’ trajectory, so you might as well say what it is and create commitments to ensure that it is achieved. The burden of those commitments (to the extent that it is a burden, and not a hidden opportunity) may not rest on the developing countries, but someone has to be responsible, or it may not happen.

I ran some rough simulations of the AOSIS targets to see what they really imply for developing countries. Here’s the global 2015 peak and 85% cut from 1990 in 2050: 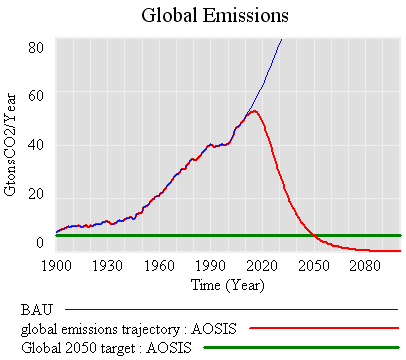 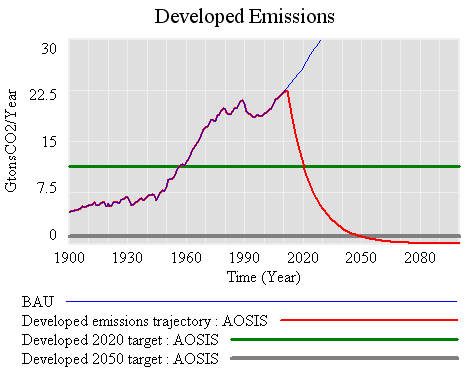 What does that leave for the developing countries? 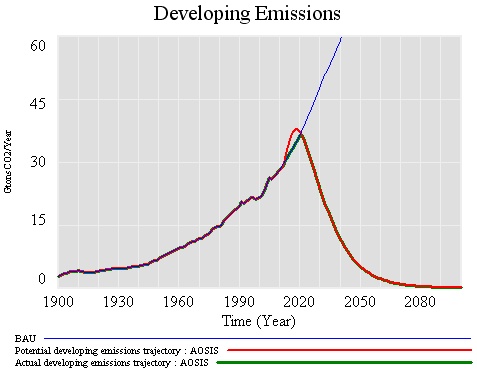 In short, “significant deviations from baselines” has to be the understatement of the century if the AOSIS global target is to be achieved, in spite of the deep cuts in developed country emissions. Developing emissions peak by around 2020 and have fallen by roughly 75% vs 1990 in 2050. This is not a matter of fairness (fairness is about the distribution of costs and benefits). It’s a matter of physics. Global emissions can’t go down rapidly unless both its major components shrink. (Notice also in the graph above that “potential” emissions exceed BAU until 2020; this is because developed country cuts are initially so rapid. Presumably developing country emissions would not actually rise above BAU, which means that the surplus could be used to delay the peak, but only by a year or two.)

Afterthought: as before, this is based on C-ROADS data and projections, with BAU similar to SRES A1FI, though the results are hardly sensitive to the specifics. Thanks to Stephanie & Allison at SI for tracking down the drafts.