Like the AOSIS draft, the LTCA draft is a bit coy about developing country actions, and there are a number of unsettled language variations, indicated by brackets. It sets a global goal of 1.5C to 2C, and emissions cuts of 50 to 95 percent from 1990 levels by 2050. Developed countries commit to between 75 and more than 95 percent by 2050, with interim targets of 25 to 45 percent below 1990 by 2020. The developing countries are not explicitly subject to targets, but the combination of supported and autonomous NAMAs is “aimed at achieving a substantial deviation in emissions [in the order of 15-30 percent by 2020] relative to those emissions that would occur in the absence of enhanced mitigation.” The BAU trajectory against which that might be judged is unspecified.

In that scenario, developing emissions could look like the following: 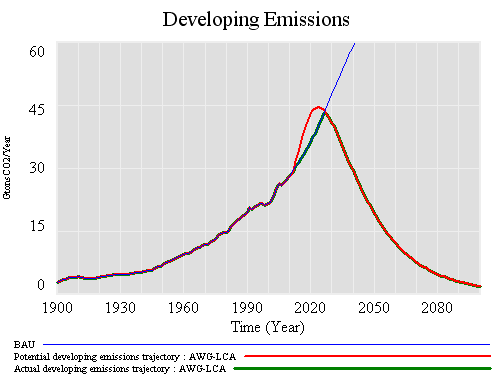 Emissions in the developing countries still must peak before 2030. Note that, as in my AOSIS experiment, the potential emissions budget for developing countries exceeds business-as-usual; if BAU emissions don’t actually rise faster than anticipated, those emissions might be reallocated to delay the peak in emissions a bit, but not more than a few years. 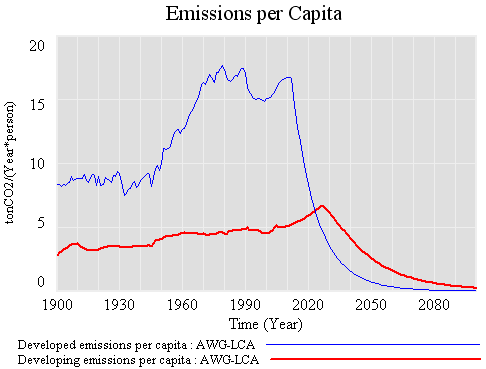 It’s unlikely that this is a physically or politically realizable situation, given that developed countries would have to reduce emissions far faster than the natural rate of capital turnover. The rapid decline would not benefit developing countries either, because buildings and infrastructure cannot be moved elsewhere. If developed countries make less aggressive cuts, to about -30% in 2020 and -85% in 2050, per capita emissions converge between 2030 and 2040. However, in that case, developing country emissions have to peak earlier and fall faster.

The only way to delay the peak in developing country emissions significantly is to delay the global peak. However, meeting the same global 2050 target with a later start requires faster declines in emissions, which quickly become impractical unless you assume some kind of technical miracle (not a robust strategy). Therefore, the only way for developing countries to avoid a peak in emissions in the next decade or two is to abandon any pretense of preserving a reasonable probability of meeting 2C or similar targets. That seems to be what some of the big emerging emitters are implicitly arguing for, but is it what they really want, or in their best interest?

Afterthought: The big challenge is that the global and developed country targets are explicit, while the developing country trajectory those necessitate is not. The draft recognizes means for reducing developing country emissions (supported and autonomous NAMAs), but there’s no coordinating mechanism that ensures the outcome adds up to the global goal.