There’s an interesting discussion about a CNN poll of public perceptions of the federal budget over at Statistical Modeling. Don’t bias yourself – check it out and test yourself before you peek at my contribution below the fold.

END_OF_DOCUMENT_TOKEN_TO_BE_REPLACED

I’m rediscovering my old frustrations with aggregate production functions like the CES. They’re handy, but I have a nagging suspicion, never quite formalized, that they just don’t capture the engineering/thermodynamic realities of substitution. Anyone know any papers on that? I’m aware of critiques of KLEM applications, but not interfuel aggregation. 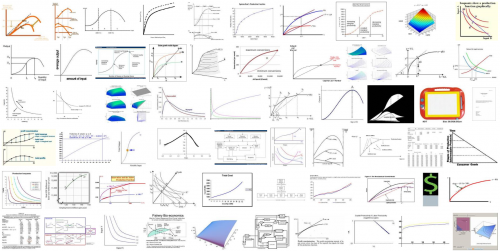 Click to enlarge. From a google images search for production function.

One of the favorite themes of the candy alarmists is dental decay: candy causes cavities! How many times have you heard that one? But it just ain’t so.

From no less an authority than the New York Times, this week’s Science section:

While candy and sugar get all the blame, cavities are caused primarily by bacteria that cling to teeth and feast on particles of food from your last meal.

Your last meal. Did you hear that? Not candy, not at all. It’s food, just plain old food, that those cavity-causing bacteria crave.

This is just what we’d all like to hear – cavities are a random act of bacterial promiscuity, so we can gorge on candy as much as we want without dental repercussions!

Unfortunately, this is highly misleading.

The NYT article mentions that streptococcus mutans is one of the common cavity precursor bacteria. A quick trip to wikipedia and microbe wiki reveals all. Here’s a rough picture of the process: 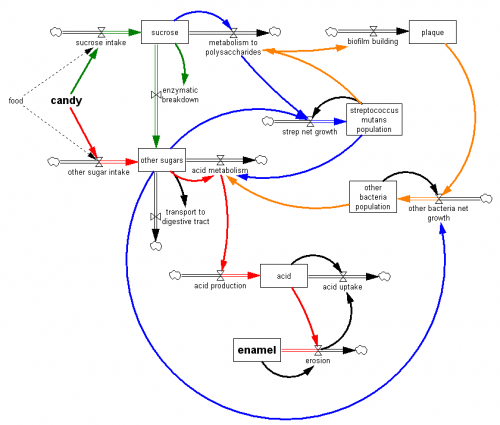 At top left, food (including candy) goes in. The output of this system that we’re interested in is healthy tooth enamel – i.e. the opposite of cavities. There are many causal pathways between candy and cavities. The simplest (in red) starts when candy (i.e. sugars) goes into the mouth. There, in the presence of bacteria, it’s metabolized to acid, which is neutralized by eroding enamel. That’s bad.

Things get worse if the candy contains sucrose. Sucrose is enzymatically degraded to fructose and glucose (green path), directly fueling the acid process. More importantly, S. mutans preferentially hijacks sucrose, consuming the fructose for energy and using the glucose to make a sticky polysacharide scaffolding for its colonies, which we come to know as plaque. That plaque becomes a home for other less hardy bacteria (orange path). The existence of food and housing allows bacterial populations of all sorts to flourish (blue paths). All of this increases enamel-eroding acid metabolism.

Admittedly, none of this would happen without bacteria around to metabolize sugars. But that’s a feedback loop – sugar intake fuels the growth of the bacterial populations. The idea that “It’s food, just plain old food, that those cavity-causing bacteria crave” is surely nonsense, because there’s a metabolic penalty and a delay in converting complex carbohydrates into cavity-causing sugars. That delay means that the shorter time constant, of chewing and swallowing your food, dominates, so that the primary fuel for bacteria must be simpler (or stickier) carbohydrates.

The existence of at least half a dozen causal pathways from candy intake to loss of tooth enamel gives the lie to the notion that it’s “Not candy, not at all.” You can blame the bacteria if you like, but that’s a victim’s approach to policy. Absent an S. mutans vaccine or similar innovations, there’s not much we can do about our resident bacteria. We can, however, choose not to feed them substances that are uniquely suited to fueling their populations and the destructive processes that result.

I was planning an April Fool’s Day post to mock the Montana legislature, but I really can’t top what’s actually been going on in Helena over the past few days. One bar-owning legislator proposed rolling back DUI laws, to preserve the sacred small town rite of driving home drunk from the bar. The same day, they seriously debated putting the state on the gold standard, which drew open laughter and an amendment to permit paying state transactions in coal. The gold bugs, who fancy themselves constitutional scholars, evidently weren’t around when the proposal to assert eminent domain power over federal lands was drafted. I could go on and on… It’s troubling, because I keep getting my news reader feed mixed up with The Onion.

A comment at the Bozeman Daily Chronicle captured widespread sentiment around here better than I can:

Hey members of the house- Thanks for wasting our money. Try to do something productive up there instead of making all Montanans look like a bunch of idiots. If I was as worthless as you I’d kick my own a_$. Put that in your cowboy code…