You often see models expressed in discrete time, like

That’s Samuelson’s multiplier-accelerator model. The same notation is ubiquitous in statistics, economics, ABM and many other areas. 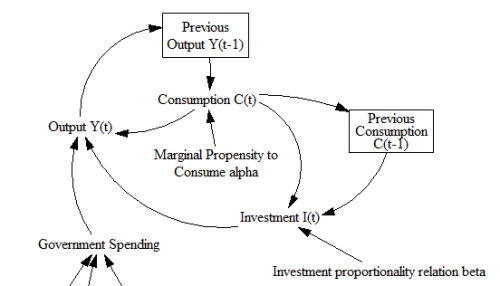 So, what’s the problem?

Certainly, there are cases that require a discrete time simulation (here’s a nice chapter on analysis of such systems). But most of the time, a continuous approach is a better starting point, as Jay Forrester wrote 50 years ago. The best approach is sometimes a hybrid, with an undercurrent of continuous time for the “physics” of the model, but with measurement processes represented by explicit sampling at discrete intervals.

So, what if you find a skanky discrete time model in your analytic sock drawer? Fear not, you can convert it.

Consider the adstock model, representing the cumulative effects of advertising:

Notice that k is related to the lifetime of advertising, but because it’s relative to the discrete interval, it’s misleadingly dimensionless. Also, the interval is fixed at 1 time unit, and can’t be changed without scaling k.

Also notice that the ad effect has an instantaneous component. Usually there’s some delay between ad exposure and action. That delay might be negligible in some cases, like in-app purchases, but it’s typically not negligible for in-store behavior.

You can translate this into Vensim lingo literally by using a discrete delay:

That’s functional, but it’s not much of an improvement. Much better is to recognize that Adstock is (surprise!) a stock that changes over time:

Now the ad life has a dimensioned real-world interpretation and you can simulate with whatever time step you need, independent of the parameters (as long as it’s small enough).

There’s one fly in the ointment: the instantaneous ad effect I mentioned above. That happens when, for example, the data interval is weekly, and ads released have some effect within their week of release – the Monday sales flyer drives weekend sales, for example.

There are two solutions for this:

Occasionally, you’ll run into more than one delayed state on the right side of the equation, as with the inclusion of Y(t-1) and Y(t-2) in the Samuelson model (top). That generally signals either a delay with a complex structure (e.g., 2nd or higher order), or some other higher-order effect. Generally, you should be able to give a name and interpretation to these states (as with the construction of Y and C in the Samuelson model). If you can’t, don’t pull your hair out. It could be that the original is ill-formulated. Instead, think things through from scratch with stocks and flows in mind.