PNAS has a new article on climate catastrophe mechanisms, focused on the social side, not natural tipping points. The article includes a causal loop diagram capturing some of the key feedbacks: 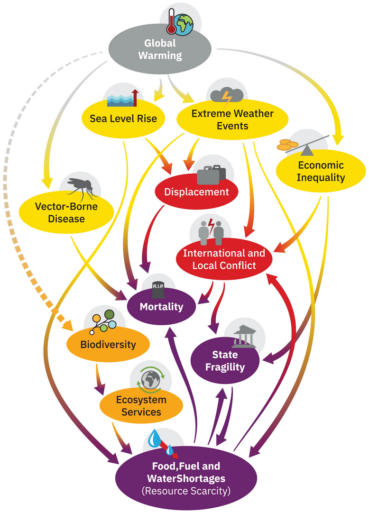 The diagram makes an unconventional choice: link polarity is denoted by dashed lines, rather than the usual + and – designations at arrowheads. Per the caption,

This is a causal loop diagram, in which a complete line represents a positive polarity (e.g., amplifying feedback; not necessarily positive in a normative sense) and a dotted line denotes a negative polarity (meaning a dampening feedback).

Does this new convention work? I don’t think so. It’s not less visually cluttered, and it makes negative links look tentative, though in fact there’s no reason for a negative link to have any less influence than a positive one. I think it makes it harder to assess loop polarity by following reversals from – links. There’s at least one goof: increasing ecosystem services should decrease food and water shortages, so that link should have negative polarity.

The caption also confuses link and loop polarity: “a complete line represents a positive polarity (e.g., amplifying feedback”. A single line is a causal link, not a loop, and therefore doesn’t represent feedback at all. (The rare exception might be a variable with a link back to itself, sometimes used to indicate self-reinforcement without elaborating on the mechanism.)

Nevertheless, I think this is a useful start toward a map of the territory. For me, it was generative, i.e. it immediately suggested a lot of related effects. I’ve elaborated on the original here: 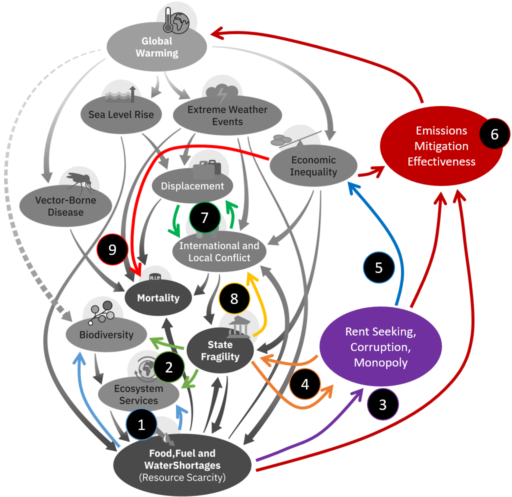 #6 is key, because it makes it clear that warming is endogenous. Without it, the other variables represent a climate-induced cascade of effects. In reality, I think we’re already seeing many of the tipping effects (resource and corruption effects on state fragility, for example) and the resulting governance problems are a primary cause of the failure to reduce emissions.

I’m sure I’ve missed a bunch of links, but this is already a case of John Muir‘s idea, “When we try to pick out anything by itself, we find it hitched to everything else in the Universe.”

Unfortunately, most of the hitches here create reinforcing loops, which can amplify our predicament and cause catastrophic tipping events. I prefer to see this as an opportunity: we can run these vicious cycles in reverse, making them virtuous. Fighting corruption makes states less fragile, making mitigation more successful, reducing future warming and the cascade of side effects that would otherwise reinforce state fragility in the future. Corruption is just one of many places to start, and any progress is amplified. It’s just up to us to cross enough virtuous tipping points to get the whole system moving in a good direction.