Since I wrote about Lake Mead ten years ago (1 2 3), things have not improved. It’s down to 1068 feet, holding fairly steady after a brief boost in the wet year 2011-12. The Reclamation outlook has it losing another 60 feet in the next two years.

The stabilization has a lot to do with successful conservation. In Phoenix, for example, water use is down even though population is up. Some of this is technology and habits, and some of it is banishment of “useless grass” and other wasteful practices. MJ describes water cops in Las Vegas:

Investigator Perry Kaye jammed the brakes of his government-issued vehicle to survey the offense. “Uh oh this doesn’t look too good. Let’s take a peek,” he said, exiting the car to handle what has become one of the most existential violations in drought-stricken Las Vegas—a faulty sprinkler.

“These sprinklers haven’t popped up properly, they are just oozing everywhere,” muttered Kaye. He has been policing water waste for the past 16 years, issuing countless fines in that time. “I had hoped I would’ve worked myself out of a job by now. But it looks like I will retire first.”

Enforcement undoubtedly helps, but it strikes me as a band-aid where a tourniquet is needed. While the city is out checking sprinklers, people are free to waste water in a hundred less-conspicuous ways. That’s because standards say “conserve” but the market says “consume” – water is still cheap. As long as that’s true, technology improvements are offset by rebound effects.

Often, cheap water is justified as an equity issue: the poor need low-cost water. But there’s nothing equitable about water rates. The symptom is in the behavior of the top users:

Total and per-capita water use in Southern Nevada has declined over the last decade, even as the region’s population has increased by 14%. But water use among the biggest water users — some of the valley’s wealthiest, most prominent residents — has held steady.

In part, I’m sure the top 100 users consume 10 to 100x as much water as the median user because they have 10 to 100x as much money (or more). But this behavior is also baked into the rate structure. At first glance, it’s nicely progressive, like the price tiers for a 5/8″ meter: 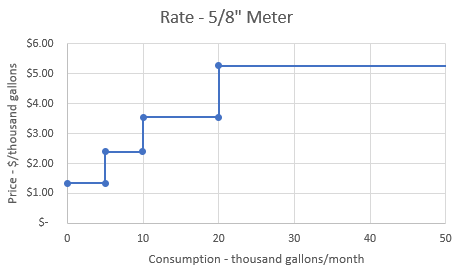 A top user (>20k gallons a month) pays almost 4x as much as a first-tier user (up to 5k gallons a month). But … not so fast. There’s a huge loophole. High users can buy down the rate by installing a bigger meter. That means the real rate structure looks like this: 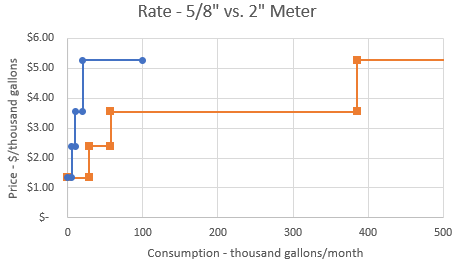 A high user can consume 20x as much water with a 2″ meter before hitting the top rate tier. There’s really no economic justification for this – transaction costs and economies of scale are surely tiny compared to these discounts. The seller (the water district) certainly isn’t trying to push more sales to high-volume users to make a profit.

To me, this looks a lot like CAFE, which allocates more fuel consumption rights to vehicles with larger footprints, and Energy Star, which sets a lower bar for larger refrigerators. It’s no wonder that these policies have achieved only modest gains over multiple decades, while equity has worsened. Until we’re willing to align economic incentives with standards, financing and other measures, I fear that we’re just not serious enough to solve water or energy problems. Meanwhile, exhorting virtue is just a way to exhaust altruism.