A Coupling is simply a reference from one Node to another, with a strength parameter: 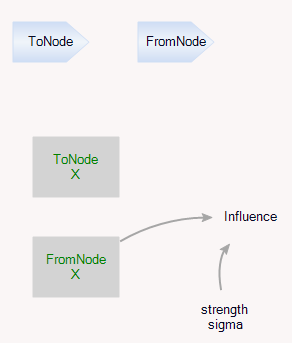 If you don’t create any Couplings, the Nodes run standalone, as in Section 2.1 of the paper. You can use that to see how the bistable dynamics of X create a tipping point, by running a set of nodes with different initial conditions:

By increasing the global Model.const a, you can induce a bifurcation that destabilizes the lower branch of the system, so that all trajectories tend to increase: 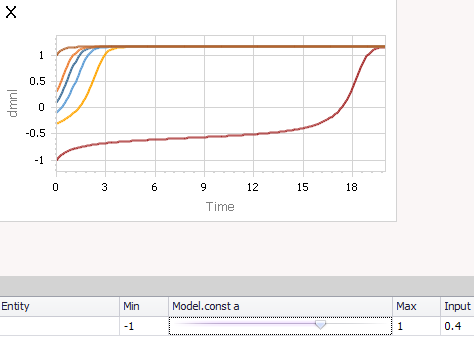 Section 2.2 of the paper illustrates a master-slave system, with two Nodes and a single Coupling by which the master Node influences the Slave. I actually set this up with a single master driving multiple slaves, where each slave has a different initial X. Then increasing the master’s initial X spills over to shift the stability of Slave 4’s initial state:

In Section 2.3, things get really interesting, with cascade hopping. In this scenario, there are three coupled Nodes, X -> Y -> Z. X (blue) is disturbed exogenously by changing its local const a parameter at time 8, causing it to transition from a stable value near 1 to about -1.2. This in turn influences a slight shift in Y’s state (red), but due to weak coupling that’s not enough to destabilize Y. However, the small shift in Y is enough to nudge Z out of its state, causing a sudden transition to -1.2 around time 18. 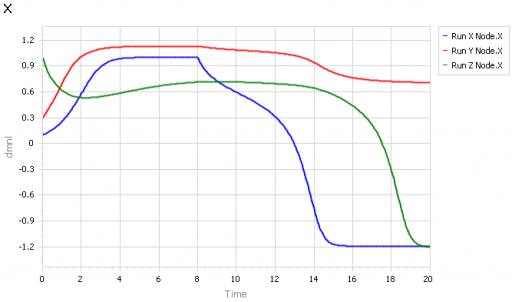 Consider what this would do to any simple correlation-based thinking, or a regression model. X has clearly caused a catastrophic change in Z, but without much of an obvious change in Y. In the presence of noise, it would be easy to conclude that this was all a coincidence. (If you harbor any doubt about the causality, just set Node X’s const a chg to zero and see what happens.)

I encourage you to take a look at the original paper – it has some nice phase diagrams and goes on to consider some interesting applications. I think the same structure could be used to implement another interesting network dynamics paper: State-dependent effective interactions in oscillator networks through coupling functions with dead zones. And if you like the topic, Network Catastrophe: Self-Organized Patterns Reveal both the Instability and the Structure of Complex Networks has more interesting data-centric applications.

An interesting extension of this model would be to generalize to larger networks, by modifying the input data or using actions to generate random networks.