I’ve been reflecting further on yesterday’s post, in which I noticed that the PUC intervened in ERCOT’s market pricing.

Here’s what happened. Starting around the 12th, prices ran up from their usual $20/MWh ballpark to $1000 typical of peak hours on the 14th, hitting the $9000/MWh market cap overnight on the 14th/15th, then falling midday on the 15th. Then the night of the 15th/16th, prices spiked back up to the cap and stayed there for several days. 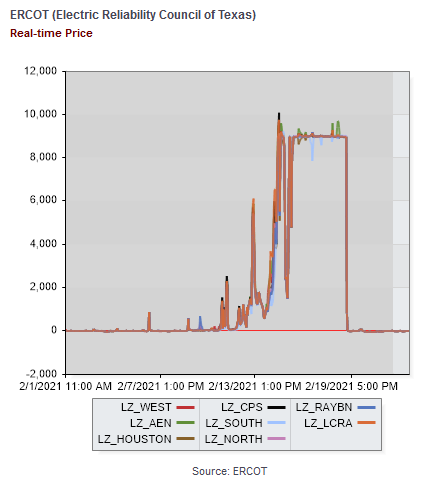 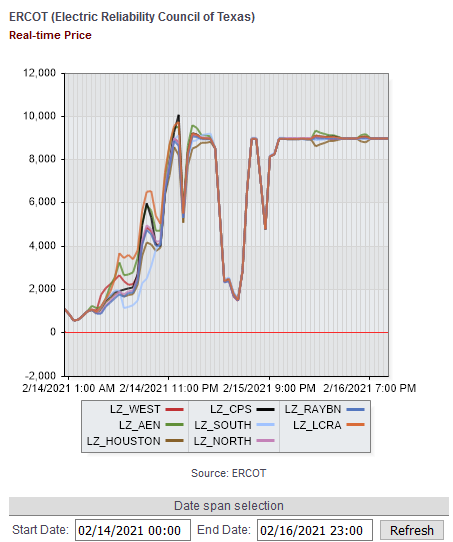 On the 16th, the PUC issued an order to ERCOT, directing it to set prices at the $9000 level, even retroactively. Evidently they later decided that the retroactive aspect was unwise (and probably illegal) and rescinded that portion of the order.

ERCOT has informed the Commission that energy prices across the system are clearing at less than $9,000, which is the current system-wide offer cap pursuant to 16 TAC §25.505(g)(6)(B). At various times today, energy prices across the system have been as low as approximately $1,200. The Commission believes this outcome is inconsistent with the fundamental design of the ERCOT market. Energy prices should reflect scarcity of the supply. If customer load is being shed, scarcity is at its maximum, and the market price for the energy needed to serve that load should also be at its highest.

Griddy, who’s getting the blame for customers exposed to wholesale prices, argues that the PUC erred:

At Griddy, transparency has always been our goal. We know you are angry and so are we. Pissed, in fact. Here’s what’s been going down:

On Monday evening the Public Utility Commission of Texas (PUCT) cited its “complete authority over ERCOT” to direct that ERCOT set pricing at $9/kWh until the grid could manage the outage situation after being ravaged by the freezing winter storm.

Under ERCOT’s market rules, such a pricing scenario is only enforced when available generation is about to run out (they usually leave a cushion of around 1,000 MW). This is the energy market that Griddy was designed for – one that allows consumers the ability to plan their usage based on the highs and lows of wholesale energy and shift their usage to the cheapest time periods.

However, the PUCT changed the rules on Monday.

As of today (Thursday), 99% of homes have their power restored and available generation was well above the 1,000 MW cushion. Yet, the PUCT left the directive in place and continued to force prices to $9/kWh, approximately 300x higher than the normal wholesale price. For a home that uses 2,000 kWh per month, prices at $9/kWh work out to over $640 per day in energy charges. By comparison, that same household would typically pay $2 per day. 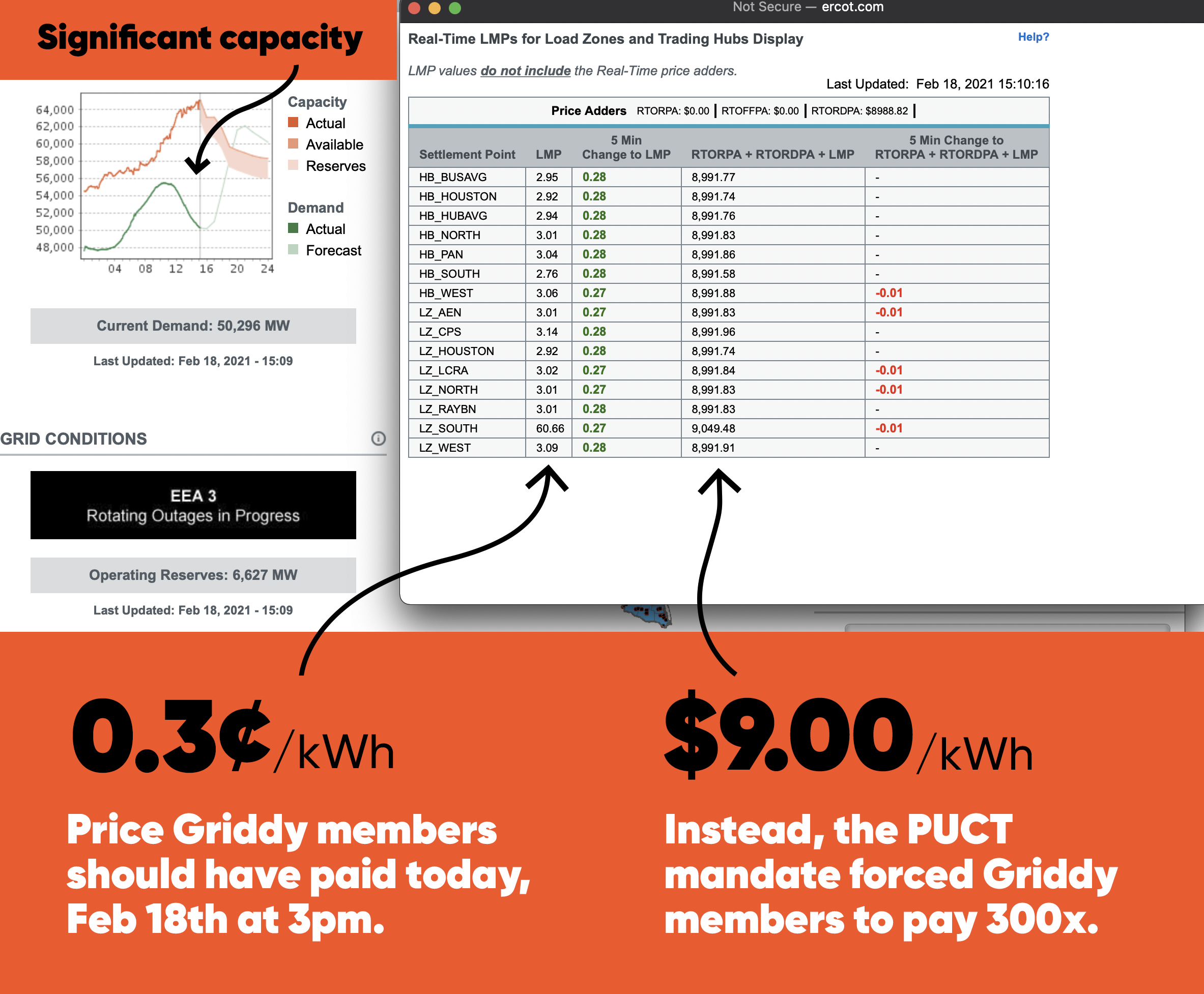 There’s one part of Griddy’s story I can’t make sense of. Their capacity chart shows substantial excess capacity from the 15th forward.

It’s a little hard to square that with generation data showing a gap between forecast conditions and actual generation persisting on the 18th, suggesting ongoing scarcity with a lot more than 1% of load offline.

This gap is presumably what the PUC relied upon to justify its order. Was it real, or illusory? One might ask, if widespread blackouts or load below projections indicate scarcity, why didn’t the market reflect the value placed on that shed load naturally? Specifically, why didn’t those who needed power simply bid for it? I can imagine a variety of answers. Maybe they couldn’t use it due to other systemic problems. Maybe they didn’t want it at such an outrageous price.

Whatever the answer, the PUC’s intervention was not a neutral act. There are winners and losers from any change in transfer pricing. The winners in this case were presumably generators. The losers were (a) customers exposed to spot prices, and (b) utilities with fixed retail rates but some exposure to spot prices. In the California debacle two decades ago, (b) led to bankruptcies. Losses for customers might be offset by accelerated restoration of power, but it doesn’t seem very plausible that pricing at the cap was a prerequisite for that.

The PUC’s mission is,

I don’t see anything about “protecting generators” and it’s hard to see how fixing prices fosters competition, so I have to agree … the PUC erred. Ironically, it’s ERCOT board members who are resigning, even though ERCOT’s actions were guided by the PUC’s assertion of total authority.

5 thoughts on “Did the Texas PUC stick it to ratepayers?”