Answers from my updated Capen Quiz:

Don’t read any further until you’ve taken the quiz! Be distracted by the little bird. Scroll no further. 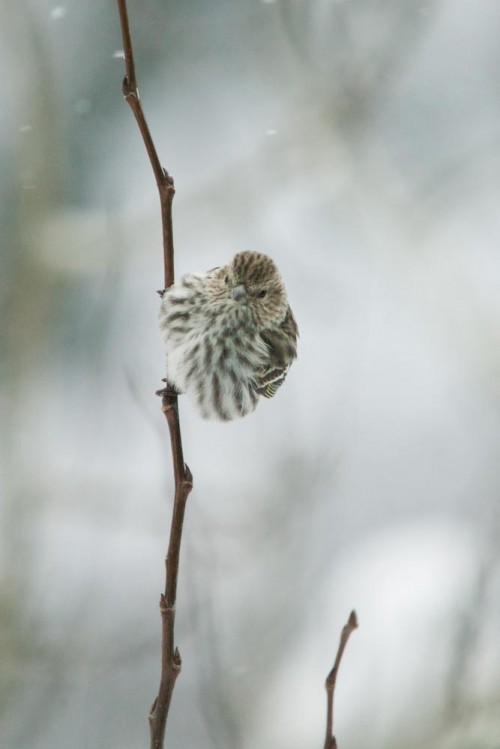 END_OF_DOCUMENT_TOKEN_TO_BE_REPLACED

Forecasters are notoriously overconfident. This applies to nearly everyone who predicts anything, not just stock analysts. A few fields, like meteorology, have gotten a handle on the uncertainty in their forecasts, but this remains the exception rather than the rule.

Having no good quantitative idea of uncertainty, there is an almost universal tendency for people to understate it. Thus, they overestimate the precision of their own knowledge and contribute to decisions that later become subject to unwelcome surprises.

A solution to this problem involves some better understanding of how to treat uncertainties and a realization that our desire for preciseness in such an unpredictable world may be leading us astray.

E.C. Capen illustrated the problem in 1976 with a quiz that asks takers to state 90% confidence intervals for a variety of things – the length of the Golden Gate bridge, the number of cars in California, etc. A winning score is 9 out of 10 right. 10 out of 10 indicates that the taker was underconfident, choosing ranges that are too wide.

Ventana colleague Bill Arthur has been giving the quiz to clients for years. In fact, it turns out that the vast majority of takers are overconfident in their knowledge – they choose ranges that are too narrow, and get only a three or four questions right. CEOs are the worst – if you score zero out of 10, you’re c-suite material.

My kids and I took the test last year. Using what we learned, we expanded the variance on our guesses of the weight of a giant pumpkin at the local coop – and as a result, brought the monster home.

Now that I’ve taken the test a few times, it spoils the fun, so last time I was in a room for the event, I doodled an updated quiz. Here’s your chance to calibrate your confidence intervals:

For each question, specify a range (minimum and maximum value) within which you are 80% certain that the true answer lies. In other words, in an ideal set of responses, 8 out of 10 answers will contain the truth within your range.

The question is, “what was the winning time in the first Tour de France bicycle race, in 1903?”

Your answer is wrong, because the truth (94 hours, 33 minutes, 14 seconds) does not lie within your range.

Note that it doesn’t help to know a lot about the subject matter – precise knowledge merely requires you to narrow your intervals in order to be correct 80% of the time.

Be sure to write down your answers (otherwise it’s too easy to rationalize ex post). No googling!

Answers at the end of next week.

For some time, the MIT Joint Program has been using roulette wheels to communicate climate uncertainty. They’ve recently updated the wheels, based on new model projections:

The changes are rather dramatic, as you can see. The no-policy wheel looks like the old joke about playing Russian Roulette with an automatic. A tiny part of the difference is a baseline change, but most is not, as the report on the underlying modeling explains:

The new projections are considerably warmer than the 2003 projections, e.g., the median surface warming in 2091 to 2100 is 5.1Â°C compared to 2.4Â°C in the earlier study. Many changes contribute to the stronger warming; among the more important ones are taking into account the cooling in the second half of the 20th century due to volcanic eruptions for input parameter estimation and a more sophisticated method for projecting GDP growth which eliminated many low emission scenarios. However, if recently published data, suggesting stronger 20th century ocean warming, are used to determine the input climate parameters, the median projected warning at the end of the 21st century is only 4.1Â°C. Nevertheless all our simulations have a very small probability of warming less than 2.4Â°C, the lower bound of the IPCC AR4 projected likely range for the A1FI scenario, which has forcing very similar to our median projection.

I think the wheels are a cool idea, but I’d be curious to know how users respond to it. Do they cheat, and spin to get the outcome they hope for? Perhaps MIT should spice things up a bit, by programming an online version that gives users’ computers the BSOD if they roll a >7C world.

Hat tip to Travis Franck for pointing this out. 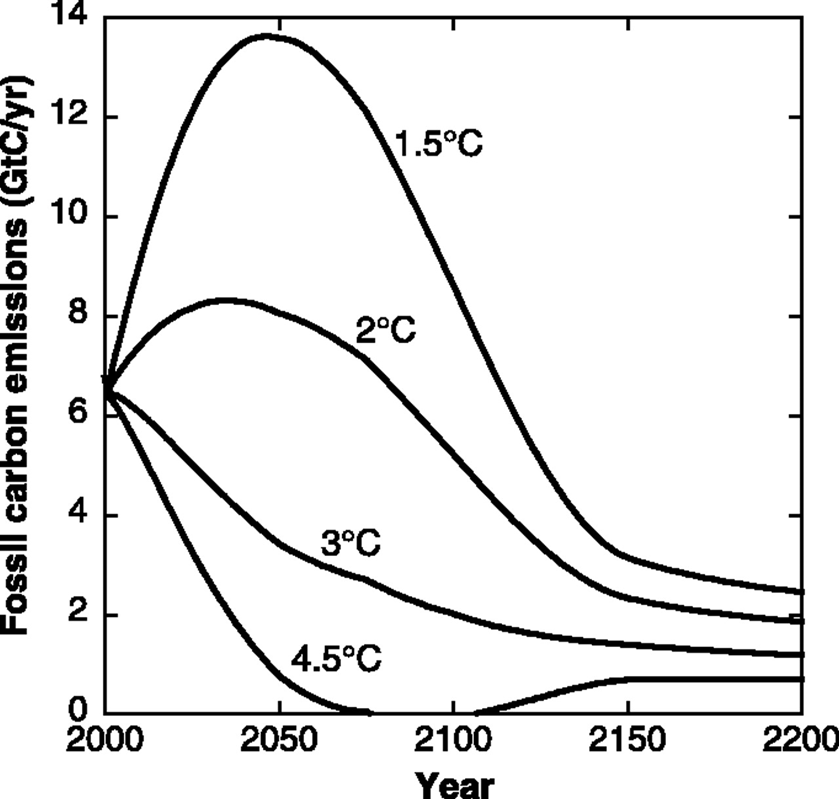 Even if we could determine a “safe” level of interference in the climate system, the sensitivity of global mean temperature to increasing atmospheric CO2 is known perhaps only to a factor of three or less. Here we show how a factor of three uncertainty in climate sensitivity introduces even greater uncertainty in allowable increases in atmospheric CO2 CO2 emissions. (Caldeira, Jain & Hoffert, Science)

The uncertainty about climate sensitivity (not to mention carbon cycle feedbacks and other tipping point phenomena) makes the emissions trajectory we need highly uncertain. That trajectory is also subject to other big uncertainties – technology, growth convergence, peak oil, etc. Together, those features make it silly to expend a lot of effort on detailed plans for 2050. We don’t need a ballistic trajectory; we need a guidance system. I’d like to see us agree to a price on GHGs everywhere now, along with a decision rule for adapting that price over time until we’re on a downward emissions trajectory. Then move on to the other legs of the stool: ensuring equitable opportunities for development, changing lifestyle, tackling institutional barriers to change, and investing in technology.

Unfortunately, cap & trade seems ill-suited to adaptive control. Emissions commitments and allowance allocations are set in multi-year intervals, announced in advance, with long lead times for design. Financial markets and industry players want that certainty, but the delay limits responsiveness. Decision makers don’t set the commitment by strictly environmental standards; they also ask themselves what allocation will result in an “acceptable” price. They’re risk averse, so they choose an allocation that’s very likely to lead to an acceptable price. That means that, more often than not, the system will be overallocated. On balance, their conservatism is probably a good thing; otherwise the whole system could unravel from a negative public reaction to volatile prices. Ironically, safety valves – one policy that could make cap & trade more robust, and thus enable better mean performance – are often opposed because they reduce emissions certainty.